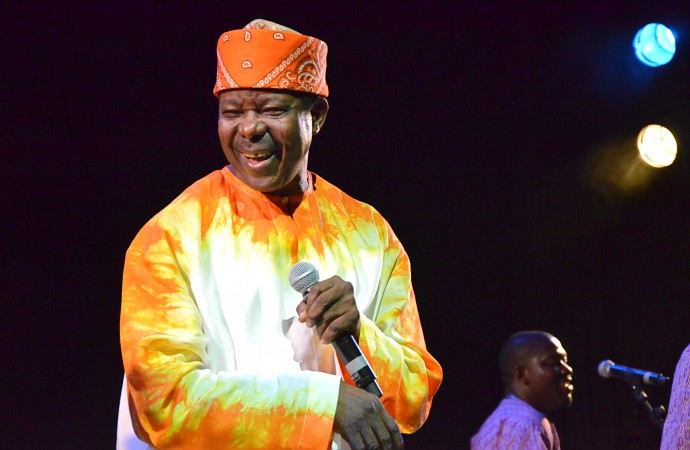 KSA has consistently wowed many with his music and dexterity on the guitar as well as showmanship that has endeared him to many, both home and abroad.

His beautiful performance has earned him two Grammy award nominations and three features in Hollywood flicks.

The multi-instrumentalist, today stands as a world music legend in his own right, making his induction into the Hard Rock Hall of Fame, something of a little surprise.

At the ceremony which took place in Lagos, Mark Redguard, a curator, giving his citation said: “KSA who came to Lagos in 1963, bought his first guitar from Victor Olaiya, also a legend musician, for one pound and nine shillings.

“The journey had continued for over 50 years and still soaring, Redguard stated.

Sunny Ade donated one of his worlds cherished acoustic instruments, a Fender Telecast guitar to the Hard Rock Hall of Fame.

The guitar which is known for its commercial success dated back to the 1950’s.

According to him, he used the same guitar for his Synchro-System album in 1983, which nominated him for his first Grammy Awards.

Describing how priceless the instrument was to him, KSA said that he communed with it like a human and stated all musical desires to be accomplished by it.

Handing over the autographed vintage Fender Guitar to the Hard Rock Hall of Fame, he was supported by various Nigerian musicians such as Don Jazzy, Iyanya, Tiwa Salvage, filmmaker, Kunle Afolayan, and comedian, Bovi, who equally eulogised him.

Redguard believes that all Sunny Ade’s past accomplishments landed him the first Nigerian to be honoured at the Hard Rock Hall of Fame among other notable mentions like Carlo Santana, Jimmy Hendricks, Michael Jackson, Elton John, and many more.