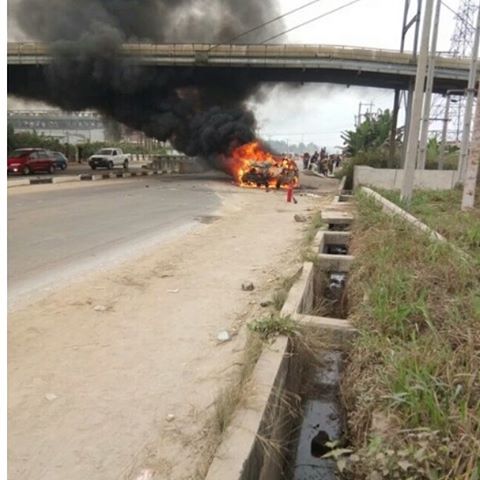 Two head teachers of a primary school, Local Authority Primary school, Igbatoro /Familugba in Akure North local government area of Ondo state, were on Tuesday crushed to death by an articulated trailer on their way to school, Tribune reports.

The two head teachers, Pastor Oluwajuwon Adebayo and his Assistant, Pastor Sunday Ajenifuja, who are the only teachers in the school, met their untimely death in the early hours of the day on their way to school at Ipele junction, near Owo.

According to a source, the driver of the trailer lost control of the vehicle, swerved off the road and rammed into the two men waiting for the vehicle.

Speaking on the incident, the Education Secretary for Akure North local government, Samuel Olowere, described the accident as unfortunate but said the Ondo State Universal Basic Education Board SUBEB) has been informed for necessary action.

Reacting to the incident, the SUBEB chairman, Princess Oladunni Odu, also who spoke through the described the incident as very sad and commiserated with the families of the deceased.

The Director of Schools, Clement Adesuyi who spoke on behalf of the chairman said though the school of the victims is located in Akure North local government area, the road from Akure is not motorable and they had to take an alternative route of Owo-Ifon-Okeluse linking Familugba/Igbatoro.

The Ondo state Police Relations Officer (PPRO), Femi Joseph, who confirmed the incident said the accident was caused by reckless and dangerous driving.

He said the driver of the trailer, Juwon Atotonu, a staff of Cobil Limited, Port Harcourt in Rivers state has been arrested by the police in the area and would be charged to the court upon completion of the investigation

2 Head Teachers Crushed To Death By Trailer In Ondo was last modified: January 31st, 2018 by Reporter