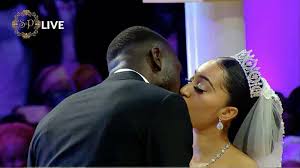 2018 will soon draw to an end, in a matter of weeks. The year has witnessed many weddings, especially in the showbiz sector, as many entertainers tied the knot in style. These wedding parties that rocked the sector cut across different spheres of entertainment, from movie stars, musicians, OAPs, footballers to beauty queens. City People’s VIVIAN ONUORAH compiles the list.

The singer and her husband have been legally married since 2015 and have two amazing kids before deciding to perform the traditional wedding rites at Omawumi’s hometown in Warri, Delta State. The event also witnessed an influx of stars.

Ghanaian singer, Becca got married to her Nigerian hubby, Tobi Sanni Daniel, who is Ice Prince’s former manager. The couple got married on Saturday, August 18, at a private ceremony in Accra, Ghana and it was, indeed, a star-studded event with many Nigerian and Ghanaian stars in attendance.

The wedding of a popular Nollywood actress, Kemi Lala Akindoju and a celebrity chef, Gbugbemi Fregene, a.k.a Chef Fregz, remains one of the most talked-about showbiz weddings in recent time. The lovebirds traditionally tied the knot  at Harbour Point, while the white wedding followed a few days later precisely Thursday, 20th September, at BCIS Garden, Lekki, Lagos. It was a galaxy of stars at the grand wedding planned by Funke Bucknor of Zapphaire Events.

The traditional wedding of Yoruba actress, Abimbola Ogunnowo, to her filmmaker hubby, Okiki Afolayan, which took place on October 6th, was one wedding that shook the Yoruba movie industry.

The couple dated for 11 years before deciding to tie the knot.

Veteran actors, Olu Jacobs and Joke Silva, pulled a train of Nollywood stars to Port Harcourt for the wedding of their son,  Olusoji, and his sweet heart, Boma Douglas.

The couple’s traditional wedding held in Buguma, while the church ceremony held on July 21,in Lagos where Pastor Tony Rapu of This Present House Church officiated.

Nigerian singer, Modupe-Oreoluwa Oyeyemi Ola, a.k.a Mo’Cheddah and her fiancé Bukunyi Olateru-Olagbegi, got engaged in 2017,  but they tied the knot in style at a traditional wedding held in Lagos, a few months ago. The wedding ceremony that held at Civic Center had a lot of showbiz stars in attendance.

Super Eagles’ player, Kenneth Omeruo, also tied the knot in style with his long-time heart-throb, Chioma Nnamani. The couple had their white wedding in faraway Istanbul, Turkey, a few months ago , after a traditional wedding that held in the bride’s home town in Enugu State.

Star actor, Gabriel Afolayan and his  sweetheart, Banke, had their traditional wedding in April 5 2018.

The actor and his partner, who is said to be US-based, had the traditional ceremony in Ibadan with friends and family members as well as colleagues in the entertainment industry in attendance.

Former Super Eagles striker, Emmanuel Emenike, got married to his bride, Iheoma Nnadi, who is also an ex-beauty queen and the mother of his child on Saturday, May 26, 2018.

Emenike and Iheoma, who was the 2014 Most Beautiful Girl in Nigeria, have been dating since May 2016 and got engaged in September 2016.

The light-skinned beauty, who reigned as Miss Imo State Queen 2014 and Miss Africa, Nigeria 2016 was also a Climate Change Ambassador.

Lagos Big Babe, Tania Omotayo, has held her traditional wedding. She is married to a popular lounge co- owner  in Lagos. The very low-key wedding had her friends and family members  in attendance.

The wedding of a popular Radio presenter  Gbemi and famous music star, Falz’s Manager, Femi, tagged: #THEGFSHOW shook the entertainment circle a few days back. The star-studded wedding event was planned by Bisola Borha of Trendy Bee and it held at The Podium Event Centre, Lekki.

Nigerian actress, Makida Moka, tied the knot with her Canadian-based Prince charming, Oliver Onyekweli, penultimate weekend. The couple  met during a short vacation at Olumo Rock in Abeokuta. Makida won the face of sleek pageant a few years ago before she went into acting.

From the screen to the aisle,TINSEL actors Ihuoma Linda Ejiofor and Ibrahim Suleiman, sprung a surprise on their fans when they declared their love for each other not long ago with a glam pre-wedding shoot. Their traditional, court & white wedding followed in a span of 3 days with colourful ceremonies that pooled a lot of movie stars.

On Saturday, 9th June, 2018, Nollywood actor, Nuella Njubigbo, and producer/director, Tchidi Chikere, celebrated their white wedding in Lagos. The grand ceremony pooled a lot of movie stars. They got married traditionally a few years ago and the union is blessed with a girl.

Nollywood actress, Zainab Balogun, also got married to her  Prince charming, Dikko Nwachukwu, the CEO of Jet West airline, a few months ago.

The couple have been in a private relationship for a while before they sealed their union. The 28-year-old Zainab is one of the hottest faces in Nollywood.

Adanne Oronu a.k.a Ada Slim, who is a TV host and Nollywood Filmmaker  got married to her  love, Karl Fredrik Skärgård, an Engineer, in Lagos, a few weeks back. The couple, who met in New York, had traditional wedding on the 29th March 2018.

One of the Bella Naija Sisters, Stephanie, who is the founder of MintVille, a professional cleaning company, and her beau Soji, co-founder of S and T Media, an out-of-home advertising company got married a few months back.

The colourful wedding had a lot of celebrities in attendance.

Popular Ghanaian actor, John Dumelo’s  traditional marriage to long-time girlfriend, Gifty Mawunya, took place on Saturday, May 12, 2018, in the Spintex area of Accra, Ghana. It was one wedding event that temporarily relocated an array of Nollywood stars to Ghana.

Sharon Oyakhilome, one of the pretty daughters of popular Nigerian Pastor, Chris Oyakhilome, General Overseer of Christ Embassy, tied the knot with her Ghanaian fiance Philip Frimpong. The love birds got married traditionally a few days ago and the white wedding tagged: The Royal Wedding followed a few days later at the Christ Embassy Headquarter in Ikeja where Pastor Benny Hinn joined the couple.

Popular Nigerian singer, Mr May D, recently got married to his Swedish baby mama, Carolina. The singer shared photos of the union a few days back.

Famous Ghanaian rapper, Sarkodie, tied the knot with his bride, Tracy, on Saturday, 22nd July, 2018 and It was a colourful ceremony with a lot of Nigerian showbiz stars in attendance despite that it was tagged private held in Sarkodie’s hometown Ghana.In attendance was Peter Okoye of defunct Psquare and he serenaded guests with his performance.

Ex-beauty queen, Nma, also tied the knot in style with her beau, Franklin. The wedding which pooled a lot of stars had popular comedian, AY & actor Charles Okafor as the MCs.Nma is the 2011 MBGN Miss Tourism.

Ebony Life Tv presenter, Tomike Alayande, has kicked off wedding rituals with her fiance. The bride-to-be had her introduction a  few days ago and the second leg of the wedding ceremony comes up soon.

Model and designer, Sarah Ofili, has tied the knot in Asaba, Delta State. The low- key  wedding was attended by close friends and relations of the couple.

Nollywood actress, Ruth Kadiri, has also left the singles list. The actress, who announced her engagement a year ago, had a low key traditional wedding a few months back in her hometown.

Fast-rising actress, Chinenye Uyanna, has also commenced her journey to matrimony. The actress revealed via her social media that her introduction ceremony held a few weeks ago.