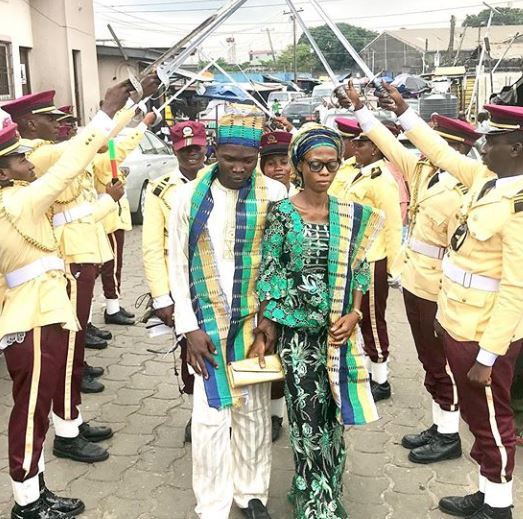 It was a celebration of what could be termed unconditional love when a visually impaired officer of the Lagos State Transport Management Authority (LASTMA), Yusufu Olawale got wedded to his heartthrob.

The wedding, staged on Saturday, was a spectacular sight which had Olawale drabbed in his ceremonial LASTMA uniform alongside his beautiful bride.

The Lagos-state owned agency released an official statement where it described Olawale as “a hardworking officer” who lost his sight while discharging his duties on the job.

“Yesterday, one of our officers, Yesufa Olawale, tied the knot with his heartthrob, Adenike. Officer Olawale is a very hardworking officer who lost his sight while discharging his official duties. We pray God Almighty to bless the Union,” the statement read.

Below are some pictures and a video of the couple with families, friends and a number of LASTMA officers dancing and donning their maroon and creamy uniform at the ceremony.