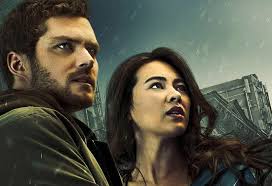 Danny Rand (Finn Jones) must contend with his former friend Davos (Sacha Dhawan) who has also obtained superpowers in the latest trailer for Iron Fist Season 2.

released Thursday, features Colleen (Jessica Henwick) concerned over how hard Danny is pushing himself as he continues to protect the streets of New York City.

When Danny is confronted by Davos, a skilled warrior who feels he should have been crowned The Immortal Iron Fist, he enlists the help of Colleen and Misty Knight (Simone Missick) of Luke Cage fame who provides assistance with her new robotic arm.

Danny is also seen battling a new villain, Typhoid Mary (Alice Eve) and enjoying a date night out with Colleen.

Iron Fist Season 2 is set to arrive on Netflix on Sept. 7. Jessica Stroup and Tom Pelphrey are also set to star.