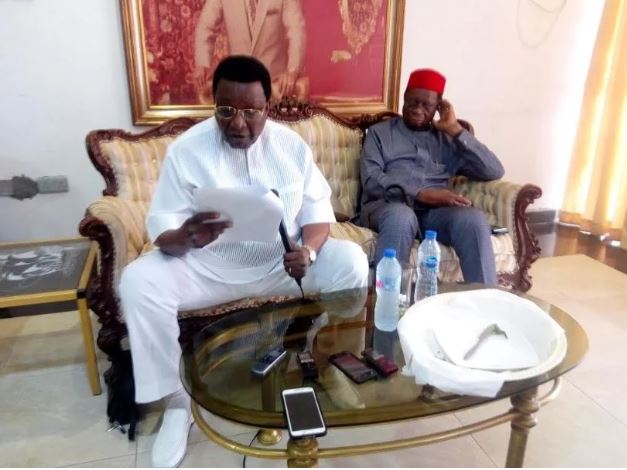 Former Governor of old Anambra State, Senator Jim Nwobodo has spoken on his defection to the Peoples Democratic Party, PDP.

Nwodo had recently dumped the All Progressives Congress, APC, during a visit by the party’s stakeholders in the Southeast.

He has now issued full statement on his decision.

At this stage of my life, I see myself more as an elder statesman than a partisan politician and I speak from this standpoint. I have served our country both at the state and the federal level. In the course of my political journey from second republic till date, I have had my fair share of ups and downs. I made mistakes and learned from my mistakes, I have learned a lot from my experiences and feel qualified to speak on burning issues confronting us as a nation.

I cannot pretend that all is well in our country today with the escalating crisis, ranging from the economy, insecurity, tension among the three arms of government – executive, legislative and judiciary. Dangerous divisions along tribal and religious lines, and different militant groups arising from the hues and cries of marginalization.

What we are seeing are symptoms of deep rooted issues that should be brought to the table for discussions on how to address them. I am a democrat and a strong believer in democracy. Those of us who claim to be democrats have a duty to tell the president the truth and advise him appropriately. I have been chief executive of a big state and I appreciate how difficult it could be for the chief executive of a state or a country to know the true situation of things with the people you govern.

Just a few of the many undemocratic moves and sayings that are capable of igniting crisis:

As a member of APC and a democrat, I got visibly worried when I heard party members boasting we have won the election and just waiting for results to be announced. My question was how? How? How was the election won when the elections are yet to take place?

One of the tenets of democracy is the division of power among the different INDEPENDENT arms of government, namely Executive, Legislative and Judiciary. The desecration of any of these arms of government portends danger to democracy. The ongoing attempts to arraign and prosecute the chief justice of the federation in disregard to due process is a mockery of the judiciary,which is the last hope of the common man. It is even more worrisome to read in the papers that President was not aware of such moves.

My expectation had been to see an inspiring new hope and values for the younger generation of leaders in our country. But a situation where current leaders of political parties and public office holders disparage former presidents and former leaders in the media shows we have learnt nothing from history. Is that how we intend to groom and mentor the “not too young to run” and prepare them to take over the mantle of leadership?

On the return of democracy in 1999, by the grace of General Abdusalam Abubakar, the then Head of State, I was one of founding fathers of PDP. One of the wise decisions we took was to rotate and zone the presidency between north and south. It was a great idea for inclusiveness and to avoid any part of the country feeling marginalized and left out.

Chief Dr Olusegun Obasanjo took first slot from the south and became the first beneficiary of that zoning formula. At the end of his tenure, he supported and handed over to late AlhajiUmaru Musa Yaradua, from the north. Dr Goodluck Jonathan completed the unexpired two years of Yaradua’s term and went on to contest and worn. At the end of Jonathan’s four years, he lost the election to President Muhammadu Buhari from the north.

Of the three zones in the south – South West, South South and South East,South East is the only zone that is yet produce a Nigeria president. It has been our hope that Nigerians will support our dream of producing a Nigerian President from South East, the way we supported and voted for Presidents from other zones and regions.

I had hoped the route to presidency of Igbo extraction would be the APC, but statements from some top government officials and top APC party leaders gave me a food for thought. As I was processing these statements and struggled to come to terms with them, prominent political leaders from South East led a delegation to meet with me in Abuja on the same issue. I asked for time to think about their mission and the meeting was rescheduled for today Friday January 25th. In addition, I received numerous telephone calls from both political and non-political South East leaders.

As you can see, they are here today in a larger number, after their meeting with Ohaneze. It is difficult for me to ignore their call and turn my back on them when they have a genuine worry about the fate of Igbos in Nigerian polity.

I will do the same for any other zone that feels excluded because I am a true Nigerian in all sense of it. I was born in Lafia, spent my childhood and my early education there. Thereafter, I moved to Kafanchan in Kaduna state, where I had part of my education before going to University of Ibadan and thereafter taught at Kings college Lagos. From Kings College, I went to work for Shell BP in Portharcourt. I have friends and relationships across all parts of Nigeria.

As a governor, I worked had to reconcile the late Dr Nnamdi Azikiwe and the late Chief Obafemi Awolowo, who had not sat together since after 1952 as a result of their political difference. I succeeded in bringing the two great leaders of blessed memory to my private residence in Enugu and they sat together, had lunch and discussed at length. Thereafter they communicated and attended political meetings and rallies together under the Progressive alliance we had in the second republic.

After that first meeting I had with Igbo leaders in Abuja, I received calls from people who told me APC has won and I should join the band wagon. My response to that is, people should take a stand based on what they believe and what is just and fair.

‘TraderMoni is a form of vote buying’ – Transparency International