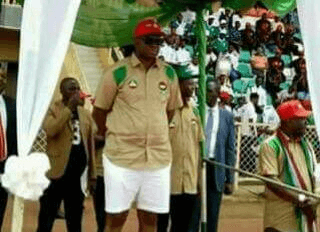 The All Progressives Congress (APC) in Ekiti State has alleged that Governor Ayodele Fayose received N1.5 billion to mobilise residents of the state of voting age to participate in the ongoing continuous voter registration exercise being undertaken by the Independent National Electoral Commission (INEC).
APC State Deputy Chairman, Mrs Kemi Olaleye, who did not disclose the source of the money, said: “We have it on good authority that the money is meant to be shared at N5,000 to each of the expected 300,000 registrants. The Governor gave the figure of 300,000 and he got the money for them”.

Olaleye, who lamented that the governor was shortchanging the registrants with the N2,000 he announced as encouragement for them, challenging him to a debate on what he intended to do with the balance of N3,000 in 300,000 places that he had allegedly held back.

Olaleye said: “I raised this issue and challenged the governor on it since last Thursday and he has not been forthcoming since then. I am still challenging him to come to tell Ekiti people the true position if he can controvert what I have said”.

The APC boss, who spoke at a meeting of the Ado Ekiti Local Government chapter of the Party in the State capital on Tuesday, charged party members who are eligible to participate in the exercise not to hesitate, adding: “The money Fayose has announced is not for People’s Democratic Party (PDP) members only. It is for Ekiti. It is necessary for you to register and collect your voter cards so that you can cast your votes for APC during elections.

The APC leader also felicitated with workers in the State on the occasion of the May Day, but regretted that the present administration in the state had been insensitive to their plight.

“I share with you your pains and hardship as a result of eight months’ unpaid salaries, unpaid pensions and gratuities and denial of proper welfare packages. We are praying that the Lord delivers us from the present government in the State by removing it from power,” she said.

Also speaking, APC chieftain, Mr Olufemi Aduloju, who said the monthly meeting hosted by the wards on rotational basis was to test the popularity of the Party, expressed confidence in APC ability and readiness to win free and fair elections in the state at any time.

Aduloju sympathised with workers in the state who he said had been betrayed by their leadership under the aegis of Nigeria Labour Congress (NLC) and Trade Union Congress (TUC).

The APC chieftain alleged that the workers’ leadership were bribed to honour Fayose with Comrade Governor, wondering, “How could NLC and TUC union leaders be bought over to give award to a governor who’s owing them salaries? What a shame!!”