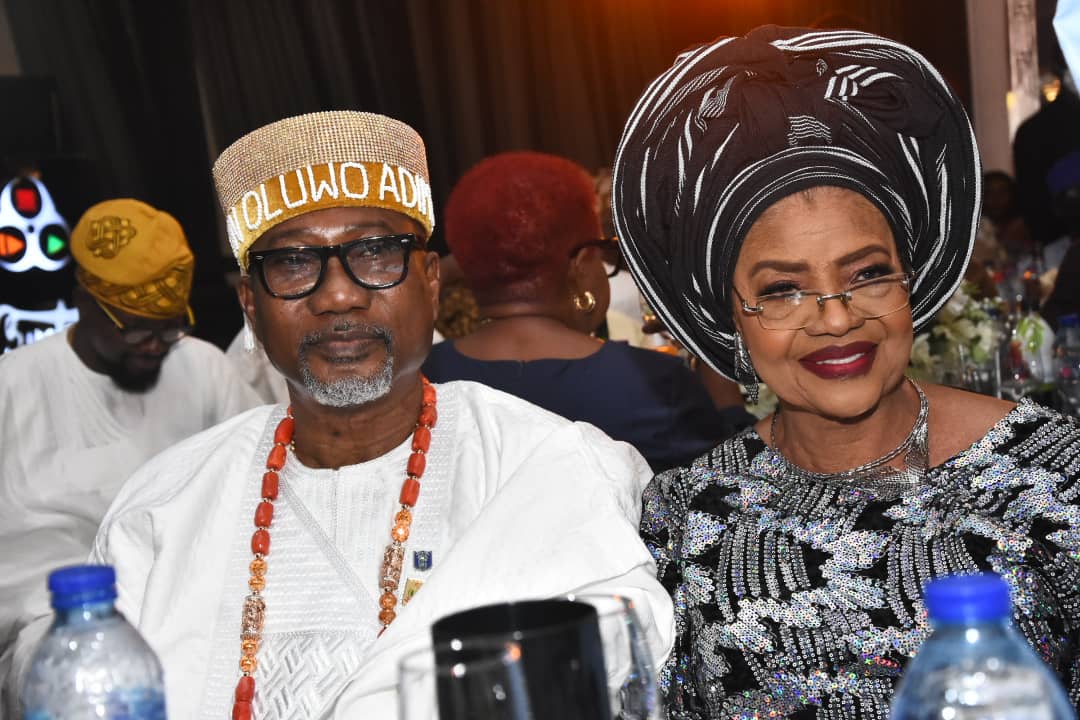 Former AIG, Aare Tunji Alapini celebrated his 70th birthday on Monday, 3rd January ,2021. On that day, this delectable gentleman was celebrated by family, friends, colleagues and schoolmates of over 50 years at the prestigious Civic Centre,at Victoria Island, Lagos.

The birthday celebration was classy, as the celebrant was treated to a memorable event by his loved ones. The 500 guests were all dressed glamorously in honour of this great man whose tribute inspired many as a humble, kind and loving father, boss, and friend. City People was at the event for exclusive coverage.

Chief Tunji Alapini is an exceptional gentleman, husband, father, grandfather, and friend. He was born to late Chief Antonio Bolaji and Mrs Fabiana Atinuke Alapini on January, 3, 1952. He grew up in Central Lagos and quickly became popular because of his endearing nature, brilliance and down to earth attitude.
He attended Holy Cross Catholic School in Lagos, St Gregory’s College, Obalende, Lagos and ST. Peters College, Abeokuta.

He also attended University College Cardiff, now University of Wales where he obtained his Masters Degree in Criminology. He enlisted in the Nigerian Police Force as a Cadet Inspector on June 15 1974, After his training at Police College, Ikeja, he was posted to Kwara State and further to the New Bussa Division, where he started his practical career. He was at a time the Nigerian Police Force Public Relations Officer, where he distinguished himself eloquently and eminently. His tour on this post shot him to limelight as one of the brightest and best advertisements of Post-Independence Nigeria Police Force.

Aare Tunji Alapini’s 70th birthday party was one of the classy, well-arranged and star-studded party that has been held in recent times. The prestigious Civic Centre was exclusively decorated in black and Gold colours, which of course was in tune with the dangling Gold plated chandeliers

The seats were orderly arranged in a way that gave hitch-free movement to guests from both wings. The ushers were also glamorous in their wine gowns, as they politely welcome guests and usher them to their reserved seats.

When one considers the calibre of guests that graced Alapini’s 70th birthday, one cannot but agree that the planning deserves to be as classy as it can be. The food vendors were on point with their hospitality and delivery. Each food vendor positioned a Waiter across every table to attend to the need of the guests. Mandies Cocktail Delight was actively present to serve various flavours of drinks; Cuisine Delicacy also preformed exceedingly great; Glazes & Ganache dessert was not left out as the team was seen serving local dishes with tasteful delicacies.

Ice Box waiters were everywhere within the hall, ready to serve every table with all sorts of assorted drinks; Mala’s catering did not also disappoint.
The satisfactory gesture could be seen in the eyes of the guests who were treated to a classy evening with the celebrant.

He is a classy Compere, for a classy event. A-list compere, Tee A is no doubt a classy anchor for the event, because of the caliber of guests that filled the hall. He was vocal and articulate and maturely guided the program of the event to the latter without distraction.

The fomer Governor of Oyo State, Otunba Alao Alaka came in the company of his son, Olamijuwonlo and the ex governor who is also an ex-police boss looked so glamorous in his white attire. Chief Akala added to the list of top dignitaries that graced the occasion.

One of Nigeria’s popular band, the SB Live band was on stand all through the event and was never caught off-guard. The band was able to flow with the anchor and knew the right number for every guest as they walk in. The SB Live recognized every important personality at the event with panegyrics that dates the guests’ ancestral heritage and pastime.

As a symbol of class, the 3-step birthday cake was decorated in Gold and White, with a Jeep image embossed on top of it. It was so beautiful and definitely added colour to the whole event. Mrs Alanipini, the children and grandchildren joined the celebrant in cutting of the birthday cake.

Mrs. Ibipo Alapini stood solidly by her husband all through the event. She rocked a classy blue attire with a blue Gele and shoulder attire. She coordinated the flow of the event and ensure that all went well.