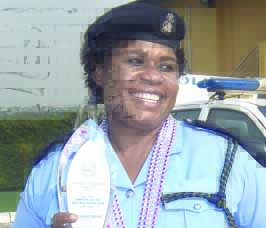 Ilasamaja is a community located in Isolo local government area of Lagos State. It’s an area that was known as a den of robbers, all sorts of criminal and notorious activities,  but it has now become a calm place. It is now an area you can sleep with your eyes closed, and the people in that community are thanking God for the intervention of one of the strongest women in the police force who happens to be the DPO of Ilasamaja Division. She is no other person than the enigmatic and indefatigable CSP Oluwasanmi, a very dependable and tenacious woman who has over the years put everything in her capacity to calm the storm that had been raging in Ilasamaja and its environs.

A few weeks ago, this amiable woman of many qualities was visited by City People Assistant Editor, SUNDAY ADIGUN and she spoke exclusively on how she battled cultists in Ilasamaja despite being a female DPO. Below are excerpts of the interview.

When you look at your life when you newly became the DPO of Ilasamaja division, what you’ve achieved so far, what comes to your mind?

To God be the glory, because there is nothing you can do without God. I don’t believe in my own strength. I was born and brought up in a Christian home, and I’ve had cause to believe in Christ since when I was a child. I always say something; I believe in the word I can do it, if others can do it, I can do it. So far, so good it has been easy. I can’t remember the last time I had 3 hours sleep. People do testify that I’m not a woman that I’m a man. I talk less. I’m a very quiet person but I believe in action. So, I can say the journey so far has been so good; though, it was rough a little. I’ve had cause to work in Alausa division as a Crime Officer. I’ve had cause to work in community policing. We launched community policing in this Lagos. I was the only woman among them. I worked in the community policing for 4½ years and trained men for the job. When I left community policing, I was posted to lion’s building as a traffic officer, the job I hated most because I’m a Lagosian. I don’t want to stay on the road. I don’t want people to see me. The day I was to resume I cried from my home to lion’s building, I pleaded for a change but they refused. I went crying. When I eventually started I said to myself; “Since you have been given the job, go there and do your best, and I did my best. I was given the best traffic officer in the whole federation for 2015. Crime Reporter Association of Nigeria discovered me on their own. The day I was to be given the award, I planned to be in China because I didn’t even know what an award was. I was just doing my job when they called me and they started reciting my qualities, my husband who represented me was like how did these people discover me this much, and he called me to start coming.

When they gave me the best officer in December, 10th 2015, a day later, the CP posted me to this place as a DPO, from divisional traffic officer to a Divisional police officer. When I was posted here, the CP was telling them that, “that woman is not as if she offended me, I was only afraid because I didn’t’ know who to post there, he started commending me and I was posted here. Imagine somebody coming from Island to see this place looking like a shrine. Anybody that comes here then would think maybe I’ve committed an offence for them to post me here. I started cleaning the place. I did the POP, I did the tiles. I painted this place single-handedly.

I’m the first woman to work here, and I was the most junior out of the DPOs that has worked here. I told all my officers that if you can’t do it my own way then get yourself transferred, but if I catch you collecting money from cultists, I will count you as head of cultists. We were still talking when some hoodlums chased themselves here in broad daylight, I was like is this how you people do here, and I said it’s not going to work. I started from this expressway. If your car has a problem here, its trouble; hoodlums will just come from nowhere and hijack your car, all your properties and leave you empty. I told my boys, once you see anybody molesting anyone, shoot the person and give me the corpse, I will give it to the CP. I went to their town hall meeting. I warned them to warn their children, that if I get hold of them they shouldn’t come and beg me, they were thinking it’s just a joke. And almost on daily basis, you must read about me on the dailies. Somebody once said to me that when I was posted here, he almost sent a letter to the CP that, a place where men cannot handle you now sent a woman? That expressway is known to be a den of robbers and it’s now free. Ilasamaja was an abode of serial rapists, robbers, in fact, the big one was when I discovered oil inside well. I was the one who arrested the robbers that robbed Basketmouth, the comedian. I recovered 2 AK47 with 13 live ammunition. I have pictures as evidence to that effect, only I don’t make noise. I made sure I give members of the Community my number, that they can call me anytime and everybody knows. You don’t call me twice before I pick it, though if you call me with an unknown number I would listen first before I talk. If you call me at 1 am, 2 am, I will answer your call, that is why the community likes me, and under 2seconds my men are there working.

Another one is that those cultists that started their operation in July, one of their leaders was arrested in broad daylight here on the same day the President came to Lagos. we recovered lots of things from him before we took him to court. After that, the leaders of Eye, Aiye, were arrested. What about the girl of 20 years old that was paraded that said she has killed 4 people? I arrested her. I don’t have to beat you before you confess. She willingly confessed to all the crimes.

What really inspired you to join the police force and what was the conviction?

I didn’t want to join the force; my uncle forced me because I didn’t like the police. I was born and brought up in Itire. Whenever we are coming from school I used to see policemen deflating people’s tyres and they would be abusing themselves. My friend and  I would be abusing them, not knowing I will also become ‘Ole’ (thief) that I used to call them (laughs). But my Uncle saw it long ago; he knows I believe in justice, and I hate cheating. That was what inspired it.

Ever since you started, what has been your staying power?

I can say God, and the people I look up to.  I have lots of mentors in this job. Like the Rtd AIG Alapinni, he’s a very clean police officer to the core. When you look at Bisi Alofe, the first female PRO, these are police officers that do not soil their hands. So it will be a great disappointment if I soil my hand too. Come to think of people who taught me this work that I’m doing, my CP was among. My former DPO Aisha was among. I learnt this hard way from the 2 of them. When I was in Lion’s building I can stand for 19 hours during presidential movement, this CP was my area commander.

Immediately he sees me, he would say leave her there; she can handle it. So they saw the potential in me and brought it out.

Tell us about your growing up, how was it like?

I started from the Island. I didn’t grow up with my parents. I’m number 3 in the family of 9. I grew up with my father’s family. Then we were on the Island when they told me my dad said, he would not allow me to grow up on the Island. He now brought me to Mushin.

Thank you! There was this masquerade that used to come out, they called him Agodongbo. There is no time that masquerades will come out and somebody will not die. So whenever the masquerade was coming out they would lock all the children inside, but as for me, they won’t know when I would sneak out and follow Agodongbo. That was how my daddy said I must relocate from Island before I become an “Agbero”.

What were the challenges you faced when you started?

The only challenge I can say I had with my friends was when we were at the Academy. They said we were not going to pass out with our colleagues, Dolapo Badmos, and Tokunbo Abanikanda. We were very close; we were like 5 and 6. Dolapo Badmos is like a sister to my husband because they are both from Ekiti. But at the end of the day, we discovered it was an act of God, they didn’t do anything to us; we were passed out with our colleagues.

READ ALSO: HOW THE WEATHER CAN AFFECT YOUR MENTAL STATE

How The Weather Can Affect Your Mental State