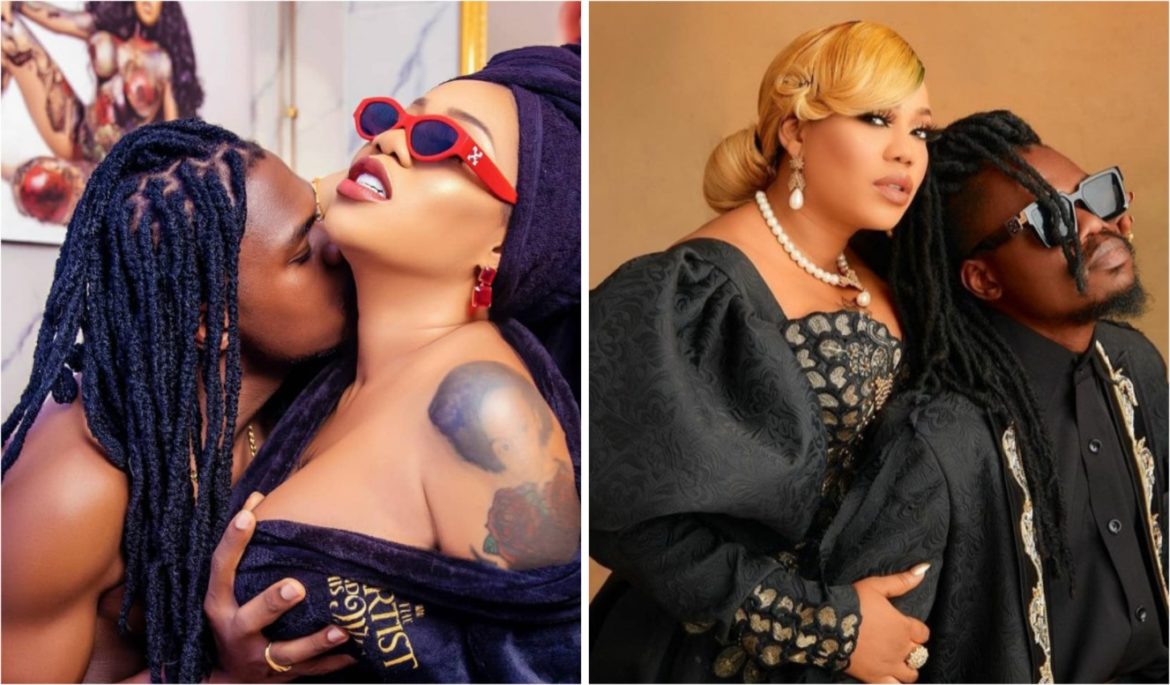 •City People Reveals The Story Of Her Wedding In LAGOS

It is no longer news that Beautiful Celebrity Stylist Toyin Lawani, tied the nuptial knot with her lover, Segun Adebayo, popularly known as Deeunknown Segun. He has been her personal photographer for over 2 years. Many were surprised on Val’s day when Toyin unveiled him as the man after her heart. She came under huge criticism, but the pretty lady is someone who cares less about what people say, but rather follows her hear weeks back.

Invitation Cards were sent out to special guests for the Traditional and Nikkai rites and reception  that would take place at the Monarch Event Center, Lekki, Lagos owned by the Elegushi’s. The invite is beautiful. It came in a box filled with customized gifts such as wine,waist trainer.The invitation card comes with a black gele and a very beautiful expensive black lace, which is the Aso ebi.

Many A-list celebrities were already looking forward to what promised to be The Wedding Of The  Year, with the hashtag “artistandhismuse2021”.

On April 27, the couple marked their 2-yr relationship anniversary. According to Toyin,” April 27th marks 2 years of creating Amazing contents together, with Deeunknown Segun Wealth. We are both a blessing to each other’s craft and we compliment each other.You get my ideas so quick, even when the world says it’s Unbelievable and Impossible. Happy anniversary my love esu oniyawa. May we continue to be a source of inspiration to each other. Thank you for putting an everlasting smile on my face once again”. Below is the blow-by-blow account of the classy wedding.

BLACK AS THE THEME OF THE WEDDING WITH HASHTAG “THE ARTISTANDHISMUSE21”

Many know that celebrity designer and serial enterpreneur, Toyin Lawani, is one lady who aside being very hardworking,  is equally very creative and always likes to be different, unique and distinct in everything she does. She has equally said it severally that unlike the white that many brides wear on their wedding days, she would be wearing black. And she, indeed, kept to her words.

She used the colour black althrough her wedding, from Decorations, to aso-ebi and even cake, everything was in black colour. It really turned out well. It made the entire venue look classy and beautiful. Black is a very daring colour that goes with every other colour’s combination and it will always turn out beautiful.

It also adds luxury to any form of decoration. Toyin Lawani, indeed, got it right with the colour black, she chose, it turned out so beautiful and elegant and everything oozed luxury and classy.

Highly celebrated Toyin Lawani popularly known as “Tiannah” is a mother, fashion mogul and serial, enterpreneur. She is, no doubt, one of the very best celebrity stylists in Nigeria. A very hardworking lady from Ekiti State, blessed with two beautiful kids. Over the weekend, she tied the knot with her heartbeat, Segun Adebayo popularly known as Segun Wealth or Deeunknown”. Who she described as a model, poet, creative photographer, farmer, musician and scientist. Quiet Segun Wealth, but one would easily fall in love with “Deeunknown” selfishness.

He has been the brain behind all beautiful photographs displayed by Toyin Lawani. He is Toyin Lawani’s personal photographer and they have been working together for sometime now. And during the wedding star actress, Mercy Aigbe, revealed that she introduced Segun Adebayo to Toyin Lawani, which makes her the “Iya Oko”. The chemistry between this two love birds blended while they worked together and they both decided to take the relationship to another level. Toyin Lawani as many know is a goal getter, and she puts her happiness above any other thing in this world. Even when many criticize her, she ignored noise and followed her heart.

The love and attention, these two show and shower on each other show that they are deeply in love with each other, and vowed to make their relationship works against all odds.

Besides being a professional photographer, Segun Adebayo also sings and he is being managed by his wife, Toyin Lawani. Their relationship started off on a professional level, as in boss and a mare worker. Today, they are both husband and wife, but still working together and hoping to build a better and bigger brand.

THE BOSS LADIES PULL OUT A SPECIAL BRIDAL SHOWER FOR TOYIN

Toyin Lawani is one celebrity who is loved by many in the society, especially her friends and patrons. Many were not surprised, she had a star-studded wedding. Before the wedding, her friends whom she refers to as “Boss ladies” pulled out a special bridal shower for her. Though, it was meant to be a surprise, but the security man at the venue of the event guffed, mistaking Toyin for one of the guests, so it didn’t come as a surprise to her anymore. But not withstanding. They still made it special and funfilled for her. One of the side attractions of the bridal shower, was the door opening challenge, which, no doubt, was one of the best many have seen.

The beautiful boss ladies were all looking pretty as ever in beautiful robes, all scripted and directed by the queen of tiktok Iyabo Ojo. It was well organised and executed. The open door challenge had the ever energetic Kaffy, justadetoun, layole oyatogun, shatizworld, olufunmi aj, gloayoade, gracy, Damilola Dickson, Victoria Sogunro, gbemmy black, olorimaiyegun christy, amonst others.

Toyin Lawani is indeed blessed with friends that will go to any length just to put smiles on her pretty face.

DIFFERENT LOOKS OF THE COUPLE

As a fashion goddess, one can’t expect anything less than expectation concerning the outfit of the couple at the wedding. The elaborate fashion statements from the wedding from many guests to the couple were breathtaking. The beautiful bride stepped out in a gold and black gown for her first look for the traditional rites, while her husband looked great in a black agbada with little touch of gold. They both looked awesome together, the chemistry between this two is something else.

Trust Toyin Lawani, the queen of transformer, she changed into a transformer dress, which had a magnifient glass dress underneath, that served as another dress. This second dress was indeed, something, that left many guests screaming immediately she stepped into the hall. The frock will definitely take an ordinary tailor a year to put together and there would still be flaws, but trust Toyin, she is good at what she does. As the groom also changed into a black suit, the entire outfits for the bride and the groom were designed by the one and only Toyin Lawani. According to her “The artist and his muse was a movie and wedding architect song helped her bring her vision to light.

They had to meet several to discuss what she wanted and being an expert, she got everything perfect for her, and every stress was worth the effort, the venue had different look for every ceremony, from the traditional, to Nikkai and the reception look, everything was on point. The venue had unusual decoration everything was different from the everyday’s wedding venue and decoration.

KENNY BLAQ AND EVE AS HOSTS

The celebrity wedding of the year “the artist his muse 21” was anchored by the Award winning popular comedian Kenny Blaq and the ever pretty Energy Goddess MC Eve. One couldn’t have this great combination at any event and there would be any dull moment. They are the complete definition of fun, unlimited. They literally cracked guests ribs big time and made the event a very remarkable one to remember..

They also looked good in their black outfits.

Big Brother Naija Winner, Lekan, was not only at the Toyin Lawani’s wedding, he was among the celebrity Artistes that performed at the event. Laycon has fondly called is a child of grace, and loved by so many. Guests couldn’t get enough of him at the wedding, while so many guests were on their feet dancing to his songs and spraying him money to show him massiv love. Others who performed were lzzlax, olakira, mc fish amongs others.

He is young and also talented Tenor, Toyin Lawani’s son, whose mum had nurtured to be a businessman, is also blessed with a talent to sing, and he already has a good number of songs to his credit. He is managed by his mum.

He was among the talented stars who entertained guests at the wedding. One thing about Tenor is that, he is not just good at singing, but blessed with this great stage display. He got stars like Tiwa Savage, Iyabo Ojo, his mum, step father and a host of celebrities were on their feet dancing to his song. The groom was practially on stage with him dancing and backing him up big time.

BOYE BEST NOT LEFT OUT

Abeokuta-based popular Musician Boye Best was equally not left out. He was at the Bandstand at the just concluded “theartisteandthemuse21”. Trust him, he knows what every guest want, and he is good at dishing out nicely selected tunes for guests to dance to and also enjoy. Also Styleplus band was among the artistes who entertain guests at the wedding.

For many who don’t know, Sir Shina Peters and Toyin Lawani shares a special bond. Even before the death of Toyin Lawani’s father Alhaji Olanrewaju Lawani, who died and was buried in April 2021, Sir Shina Peters had always endeavoured to honour Toyin at her events, most especially on her son’s Tenor’s Birthday.

During Toyin’s wedding, he took the role of Toyin’s father. A role which he did so perfectely. He was looking ageless and handsome as usual in the special aso ebi for the family. He as also specially ushered in alongside the family of the bride at the wedding.

READ ALSO: REVEALED! THE STORY OF THE AJALORUN OF IJEBU-IFE