Home News Revealed! The Story Of The Ajalorun Of IJEBU-IFE
News 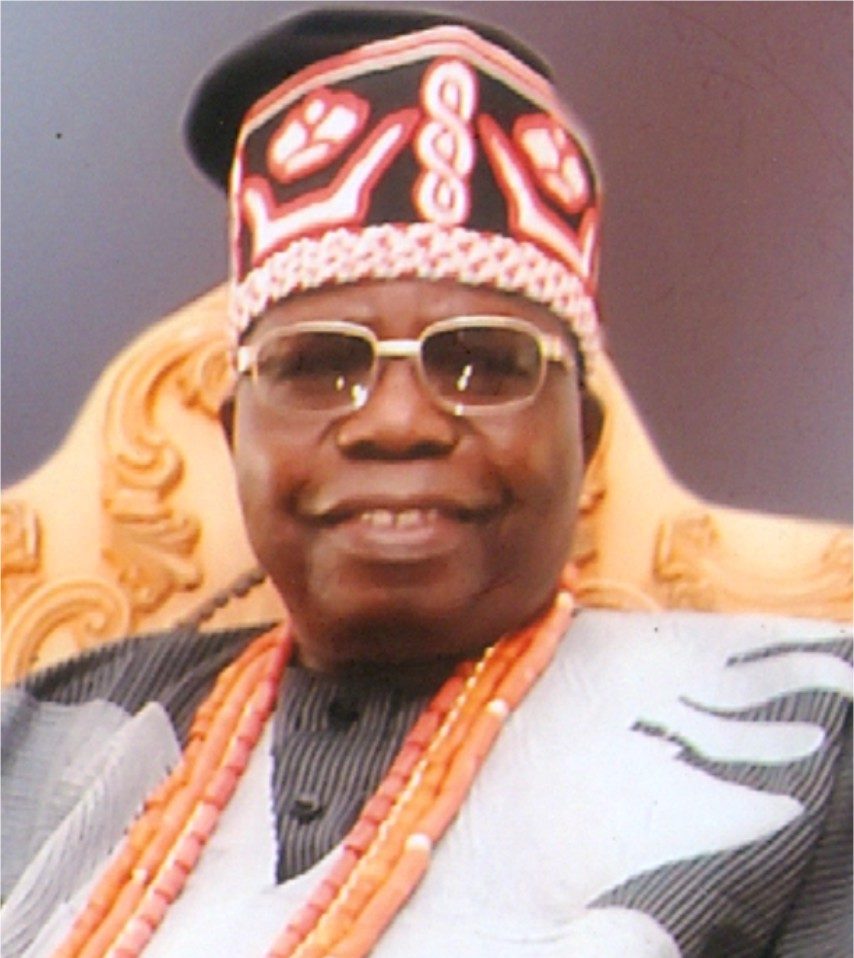 •What No One Will Tell You About Oba A.A. OGUNTAYO

As you read this, the people of Ijebu-Ife are in a happy mood. This is because in a few days time, the king of Ijebu-Ife, Alaiyeluwa Oba Adefesan Afolorunso Oguntayo (FCA), the Ajalorun of Ijebu-Ife, will be 25 years on the throne of his forbears. And he will be marking it later on this month.

He is the 42nd Ajalorun of Ijebu-Ife. City People visited him last week and we spent quality time with this great Nigerian, who is 84, but still looks very agile.

His Majesty’s life story could not be smaller than a huge book filled with great and . major events of his life from April 25, 1937, to the present. His Majesty, Oba Oguntayo was born into the royal family of Olufowobi Oguntayo, who was his grandfather and the direct son of Princess Adeoti Adeite. Princess Adeoti Adeite was the daughter of Oba Olumona Afurukeregboye, the 36th Ajalorun of Ijebu- Ife. On his mother’s lineage. Oba Oguntayo belongs to the Amesofe Ruling House, Alhaja Safuratu Omolade Oguntayo (Nee Ashiru) of Amesofe of ldofe, Ijebu-Ife.

In a network of biological descendancy, Oba Oguntayo also belongs to the Olofin Boyejo and Talabi Awoye royal families from whom Olufesogbade and Afurukeregoye Ruling Houses are offshoots. He had his primary school education at Christ Church Anglican School, Iwade, Ijebu-Ife and St. Michael’s School at Owu-Ijebu. Oba Oguntayo gained admission into Ijebu-Ode Grammar School, the first and the original citadel of Western education in Ijebuland, in 1952. It might be of interest, to know that Ijebu-Ode Grammar School was established in 1913; a full one year before Nigeria was amalgamated into a single colonial entity of Britain. Oba Oguntayo’s class of 1952 to 1956 was a distinctly “hot” academic ensemble. It consisted of outstandingly brilliant students whose academic advancement encouraged Ijebu-Ode Grammar School authorities to start presenting its well prepared five-year secondary school set of “candidates to write the West African School certificate examination instead of  the regular six year study preparatory period. By the month of March to April of 1957, when the results of the West African School certificate examinations were published, Oba Oguntayo’s class recorded higher than 90 percent pass rate, while the 6-year, set barely made 65 percent pass rate. Oba Oguntayo’s class at ljebu-Ode Grammar School laid such an unprecedented school certificate record that Ijebu-Ode Grammar School decided to reduce the number of years for preparing its students for the West African School certificate examination from 6 to 5 years. Oba Oguntayo, on his own merit, recorded an outstanding Grade one, which was the highest passing grade any brilliant student could possibly achieve from any reputable secondary school in Nigeria at that time.

After a brief spell working at the Federal Audit in Lagos, he entered the Nigerian College of Arts, Science & Technology, Ibadan, in 1958. When the Nigerian College was converted into the University of Ife, Oba Oguntayo, as a remarkable student was elected its first President of the Students’ Union.

He was also elected one of the Vice National Presidents of the ever dynamic Nigerian Union of  Nigerian Students (NUNS); the national canopy for all university students in Nigeria. By 1962, Oba Oguntayo had moved to Leeds College of Commerce, Leeds in Britain, where he completed his professional training in Accountancy. As a lover of his people and country and traditional community, Oba Oguntayo returned to Nigeria as a qualified accountant and took up employment with the Federal Ministry of Finance in Lagos. Shortly after, he joined British Petroleum, later known as African Petroleum, as an Accountant and rose to become the company’s Chief lnternal Auditor. He worked with the company until 1969, when he decided to establish a firm of chartered accountants; Oguntayo, Abimbola & Company. Fowobi Enterprises Limited – a pioneer Independent Petroleum Marketer, Nibel Company Limited: a Finance and Technical Management Company. Alaiyeluwa Oba Oguntayo is a chartered Accountant of high repute, a Fellow of the Institute of Chartered Accountants of Nigeria as well as a Fellow of the Association of Certified Accountants of England. As a man who always has the welfare of his people in mind, Oba Oguntayo briefly participated in local politics when he was elected a Councilor in Ijebu East Local Government between 1976 and 1978,  representing ljebu-lfe, This particular local government scheme was designed by the Muritala/Obasanjo military regime to usher in the Second Republic of Nigeria in 1979. Observers of Oba Oguntayo’s business career and his humble identity with his people would not be surprised to discover that he dedicated all his share of the salaries earned as a Councillor at Ijebu East Local Government to the development and welfare of the ljebu-lfe Community.

In 1975, shortly before his short stint in the local politics of ljebu East, he was rightly appointed Otunba Oraderemo (Olori Omo Oba), the head of all Princes and Princesses of ljebu-Ife. He had to relinquish the traditional post after his selection as the Ajalorun O’Dua in 1996. Oba Oguntayo, though well educated, is sound in ideas and very progressive in multiple human endeavours, he remains familiar with and keeps regularly in touch with Ijebu-Ife tradition. Before he became the Ajalorun, he always had close contact with the elders, opinion leaders and traditional leaders of Ijebu-Ife. He was always available to play a responsible and responsive role in all the public affairs of Ijebu-Ife. He, at no time, abandoned his obligations to ljebu-Ife even during his formative years.

Today, Oba Oguntayo is a devout Christian, who had earlier attended the Ijebu-Ife Koranic School as an Islamic pupil under the leadership of the late ChiefImam Raman of Ijebu-Ife, Besides, he had a good rapport with the entire Ijebu Christian circle in Ijebu-Ife and the entire Ijebu christian Diocese of the Anglican Communion.

Alaiyeluwa is still a respected and valued member of the Cathedral Church of Christ Marina, Lagos and one of the patrons of the Fountain of Hope Society of the Church. Without any doubt Oba Oguntayo, in the last 25 years, has demonstrated and convinced all sons and daughters of ljebu-l fe, old and young, that he is naturally endowed and traditionally prepared to carry the heavy responsibilities of the Office of Ajalorun.

As a man of abundant love and peace and as a philanthropist, Oba Oguntayo’s multi-various gestures have touched almost all homes in Ijebu-lfe. Aside from playing major roles in the establishment of ljebu-1fe Community Grammar School and the Comprehensive High School to create and advance

better educational opportunities for the young generations, an opportunity the Kabiyesi and all his peers never had when they were due for secondary education as teenagers.

Oba Oguntayo remains accommodating and tolerant of all his people. His company Fowobi Petroleum has for a long time established numerous petrol filling stations in and around Ijebu-Ife and beyond. As past National President of the independent Petroleum Marketers Association of Nigeria, Oba Oguntayo continues to use his business capacity to ameliorate the economic and social challenges of all and sundry. As a monarch who is alway conscious of history and its lessons, Oba Oguntayo is very mindful of what History teaches us from one generation to another and the legacies he would like to bequeath to succeeding generations. In June 2016, the ultra modem palace initiated and constructed by Oba Oguntayo was commissioned as a Legacy for Ijebu Ife Community. These and many projects have earned him tremendous respect.

Revealed! The Story Of The Ajalorun Of IJEBU-IFE was last modified: June 21st, 2021 by City People