How Olori Bunmi Akinloye Celebrated Her 60th birthday in Lagos 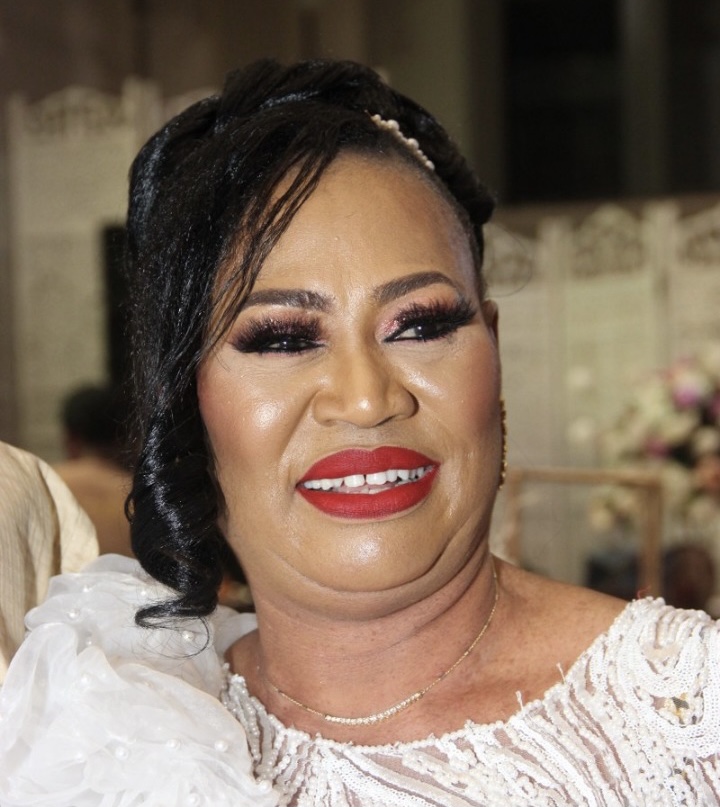 On Sunday 26th June 2022, all roads led to Monarch Event Centre at Ikate Elegushi, along Lekki-Express, in Lekki where Olori Bunmi Taibat Akinloye, the beautiful wife of Oba Tijani Adetunji Akinloye (OON), the Ojomu of Ajiranland, celebrated her 60th birthday in style. It was a classy party that had all the paraphernalia of royalty.

The celebrant is a beautiful Oloori, married to a respected traditional ruler in Lagos State. So it was not a big surprise that a lot of royal fathers turned up to honour Oba Akinloye and his beautiful wife. Oba Saheed Elegushi, came with his pretty wife, Oloori Sekinat. Onikate, Oba Adams was also there and a lot of royal fathers from the Lekki axis, also came. There were others like Blectar Gbolahan Amure, Odofin of Ajiran, and all the Chiefs in Ajiran. The venue actually befits the event. The Monarch, owned by the Elegushi’s accomodated the galaxy of celebrities who came for the event.

The hall was well decorated and the beautiful N180k Gold and Black Swiss Lace aso-ebi, complete set with gele made the event which was packaged by Tega, her energetic Event Planner, all the more colourful. The men also wore white aso-ebi. The Oba of Lagos, Oba Rilwan Akinolu sent some white capped Chiefs to represent him and his 4 wives also came.

The event had 2 high-tables, facing each other and a Stage at the centre, which had the lovely photos of the celebrant as backdrop.

On one side of the high-table was Kabiyeesi, Oba Akinloye, and all the royal fathers who came to honour him. Opposite it, was another high-table where the Chairman of the event, Aare Akanni Rasaq Okoya, the Eleganza Chairman, sat with his lovely wife, Chief Mrs. Noimot Folashade Okoya, the Style Icon, who wowed them in her trouser suit aso-ebi. Chief Okoya sat next to his brother, Alhaji Tajudeen Okoya, who also came with his wife, who sat next to Shade Okoya.

Many guests commended Alhaji Okoya for delivering a very well put together Opening Remarks, which was short and straight to the point.

The event was anchored by Tee A. and Yemi Shodimu. Both gurus in the business.

One of the high points of the party was the cutting of the cake. The cake which was hung in the air, with a chain had to be lowered for the celebrant to cut.

The event had all the trappings that usually make any party good. It had beautiful guests. Good and sumptuous food and exotic drinks which flowed, ceaselessly like water. There was also good music, as Ayo Ajekigbe & His Faith Band thrilled guests to no end. For over 7 hours, the 11 man band kept all the women and men, dancing to their variety of music, from Juju to Hip-Hop. All the band boys and their leader had their trademark Abetiaja Cap on.

The celebrant looked very stunning on her day, as she stole the show at her own party. All eyes were on her, as she shone like a million stars. She changed twice and went round to thank all her guests.

What made the party all the more colourful and beautiful was the bevy of beautiful women who all looked elegantly attired, in their Gold and Black aso-ebi. Many of them made style statements with their outfits.

Chief Mrs. Shade Okoya stood out and her set of jewellery spoke volume. Lagos businesswoman, Chief Mrs. Sade Adesoye looked sweet in her outfit, with her skin like milk radiating. She made statements with her Jewelry. Don’t forget she sells Jewelry.

Oloori Sekinat also looked radiant. She carried her outfit well because of her show stopping figure.

Chief Adebola Alabi Dosunmi, the Akinsiku of Lagos was there looking very handsome in white Agbada. And his height made him tower above others. Don’t forget that he is a man of sartorial elegance. He is forever looking trendy. He wore a pair of designer glasses to match.

Alhaja Subir and a lot of her friends contributed in one way, or, the other to the success of the party and the unveiling of her Foundation (OBA).Many of her friends gave out souvenir s.Some brought drinks, others brought food.

All the children of Kabiyesi Akinloye rallied round the celebrant,all the women from the community trooped out to celebrate her.Members of Ajiran Youth Forum were also supportive.
Days preceding her birthday, the celebrant and her friends visited the Old People’s Home, Yaba in Lagos, Correctional Centre for Girls at Idi-Araba and Prince Tajudeen Oluyole Olusi Drug Rehabilitation Centre in Lagos,to give out presents.

One group which added colour to the event were members of the Ojomu Youth Forum led by Alhaji Tajudeen Ahmed Akanbi, Chairman, Hamtajak Group of Companies and Hon. Wasiu Akinshemeyin, the Secretary.

Members, who were many, all came out to dance with the celebrant and its was Naira rain all the way, as they sprayed the celebrant with wads of sparkling naira notes.

By the time their dancing came to an end, they had spent a fortune celebrating Oloori.

So, beautiful was the party that many guests didn’t want to leave the party. As late as 10pm many ladies were still on their feet dancing to Faith Bands music.

The event which had the hashtag #BAAT60 was planned by Curated _With_Angalia , a planning outfit focused on giving every event planned the right care from start to finish.