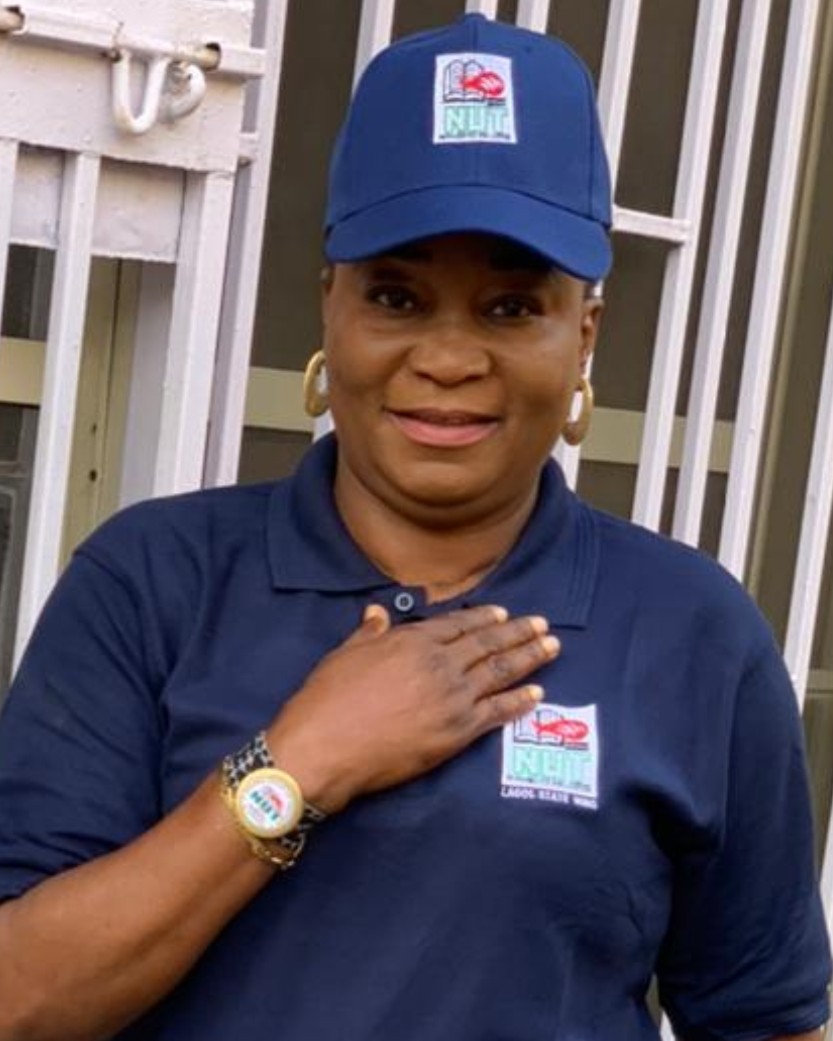 Her passion for social justice and equity made her join union activism in 2001 and right now, she is the branch chairman of the National Union of Teachers, NUT Kosofe Branch in Lagos State. She has occupied that office for four years now.

She and her team visited City People Magazine a few weeks ago where she spoke with a team that comprised of DAMILARE SALAMI (08155134152) JAMIU ABUBAKAR and Videographer, OLAOLUWA OGUNTOYINBO where she spoke about how the union has fared under her leadership among several other interesting topics. Below are excerpts from the interview, enjoy.

In the first few months of our entry, we were able to get fans for our teachers. We gathered the widows every year; we try to gather them together and show them, love. We bring people who would talk to them, and then we give them our own widow’s mite to know that they are relevant and that we still recognize them. Sometimes when teachers are distressed, they call us and there’s usually quick intervention. The few times we have lost our teachers, a very few of them, we were able to give something to the family. At least they would know that the body that they belong to came. We have started our secretariat. We don’t have any secretariat as of May 2017 that we came in but now we have started building the secretariat. We included a hall that can seat about 500 people so that retiring teachers, teachers that want to celebrate their birthday, want to have their children wedding if it’s not too big can come there and pay token. Then that secretariat too is at the lintel level now. We are doing it by ourselves and you know the financial constraint is making it not so fast. But at least we are making headways. All the leaders in Kosofe, before we were to together but as I am speaking today, all the leaders in Kosofe; we are all together.

Our participation in NUT Lagos has won awards 3 times consecutively I mean as a body now. And as a chairman, I have heard awards about 5 times. City People award was part of them. We visit our teachers on a timely basis. We just finished one today. We go around the schools, we make sure that everyone is okay and that there’s no problem with them. But there’s no way we walk for long that teachers would not err. We usually mediate for erring teachers. I make bold to say that in these last 4 years there is no teacher in Kosofe that has faced the AP & D or P and B that’s the disciplinary committee because before anything happens, we cut it at the nip.  We go there, we listen to what happened. We have counsellors among us. We try and counsel the teacher and if it is the head that needs counselling, we do that. We try and bring all of them together and this has been working so well. It has given us a kind of peaceful atmosphere in the last 4 years in Kosofe. Even the leaders are saying they have not this before in Kosofe. Then we are training teachers so that they can be financially stable.

Because if you are collecting salary and you don’t have anything you do, it is usually a little bit difficult looking at the Nigerian context where there’s inflation. Constantly, we organize training for teachers in soap making, pastry, ‘Alaga’s job’. By the grace of God, I am into engagement coordination. So we bring in people to train them. Out of the people, we have trained, we have seen about seven of them that are now working as engagement coordinators and they are now making money. This gets them financially stable. Also, we use to teach them how to make soap, tie Gele, make-up and so on. This is actually helping them. We are thinking of training them on how to make perfumes but we haven’t been able to do that because of some constraints but hopefully, by July we would be able to train them on how to make perfumes. All these are just to train them on how to make extra money to build our financial status in society. Then the AOPSHON; the head in Primary schools, all the teachers and the ANCOPSS, we have brought all of us together in such a way that we now have meetings. The ANCOPSS and AOPSHON would be there that’s the school heads at the primary school level and the school heads at the secondary school level. This by extension waving the dichotomy between primary and secondary schools that was ongoing before but now we are all partners. What we are doing now is to make education better in Kosofe and this is really helping us. Well, there lots of achievement I can’t mention them all. In bullet points, some of our achievements include: (1) Building a befitting Secretariat at Oluwalogbon Primary School at 75% completion. (2) Provision of befitting souvenir to all kosofe teachers, including LGEA and District II staff. 3) Sponsorship of keeping fit programs otherwise known as work for fitness for teachers. (4) Sponsorship of teacher’s promotion interview and duty post. (5) Sponsorship of yearly Muslim Ramadan talk and Christian lent lecture. (6) Empowerment of teachers on different skills acquisition such as soap making, Alaga, hairdressing, cosmetology engagement coordination etc. (7) Training and retraining of teachers on ICT. 8) Celebrating teachers annually on teacher’s day with a sumptuous banquet and funfair. (9) Unifying Ancopss and Aopson for the greater interest of teachers. (10) Annual sponsorship of the widow and indigent students. (11) Huge financial support to illness challenging teachers, Payment of hospital bills and medical expenses. (12) Support to the family of the falling (death) colleagues. (13) Standing up to defend the vulnerable members, obtaining the services of legal counsel to defend some members in the court at the cost to Kosofe and state NUT. (14) Establishing a cordial relationship with all Educational stakeholders such as local government/LCDA, LGEA SUBEB, Education district, and state and national assemblies. 15) Establishing school Representatives and WhatsApp of platform for easy dissemination of information.

When did you become the NUT chairperson and how long have you been running?

There are some unfinished businesses that I and my excos actually want to come back to finish. Let me give you a brief history of the NUT secretariat in Kosofe. During the tenure of Comrade Yusuf, one of our leaders, he’s retired now. He started a building at Emmanuel Primary school and that building got to the lintel level. The next people who came in after him, it’s not as if they didn’t buy into that project but were able to get slates and some things. But unfortunately, we just found that another group that came in couldn’t find those things again. As I speak to you now, that building is still there but have been taken over by SUBEB. So when I came on board and I went across other local governments for meetings, I found out that Local Government like Shomolu, Ikorodu, AJIF and so on have very beautiful secretariats. I went to Epe and I was amazed at the kind of secretariat they have. I then realized that only Kosofe doesn’t have a secretariat. This secretariat was not even part of our manifestoes. But when we came back, we met with the trustees that it’s like it’s only us that didn’t have a secretariat that we borrow spaces that I would like them to buy into the idea of building a secretariat. We started but because of financial constraints, I’m unable to finish it. I don’t want a situation whereby some people would come in and would not believe in the project again and would just abandon it, which the government may take over again. That’s one of the major push that’s making me want to come back so that we can finish it and we can commission it. Then I believe in continuity. When there’s continuity you would be able to accomplish what you have started. The second tenure would help us solidify what we have started. Then putting the teachers in mind we want them to continue to see what a peaceful environment can bring is much more than what war brings. It’s better to jaw-jaw than to war-war.

Being a woman in active unionism, what has been the drive that has kept you going?

In the teaching fold, we have over 80% females. And we now thought that we are over 80% and it’s the men that have been leading since 1931. Why can we stand up, we can have a voice and I want to thank the leadership of Baba Comrade Alogba, Michael Olukoya, Comrade Adesegun Raheem, Comrade Adeshina Adedoyin, Comrade MM Buraimoh and lots of them. They are all men but they were all saying that we should be gender-sensitive. If we want to do anything we should make sure that we have women among us. They use us as women leaders they would use us as examiner of account one. At a point, we surmounted the courage to challenge. As a joke, I started as a School representative and later I moved to become the woman leader, I moved to become the publicity secretary and here I am.

Outside Kosofe is there a plan to move to the national or something else?

What should members expect from you in the next 4 years?

We want to make life better for teachers.  There are lots of teachers that do not have a house. We are already speaking to the government that we want land teacher would be able to buy from so that they would be able to build. We are already talking to a bank so that they would bankroll the land and the teachers can pay in instalments. And after that, we would monitor and make sure they start their own house. We are thinking that it is better if we have a house so that paying house rent would be part of it. Thank God that a lot of teachers are having houses now but the young ones we want to encourage them to get theirs. Also in the area of home appliances we are talking to some companies help at such.  Prompt response to teachers in distress is one of our high points and we want to continue and probably make it better this dispensation.

What’s your message to the teachers of Kosofe Local Government?

My message to the teachers of Kosofe is that they should continue being good teachers. I am very proud of them and I pray that they would continue to be better. Then we are imploring them to please support us come June 24 2021. There’s going to be another election. They should support the Mayflower team so that we can make you better. We want you to please believe in us again as you did four years ago.