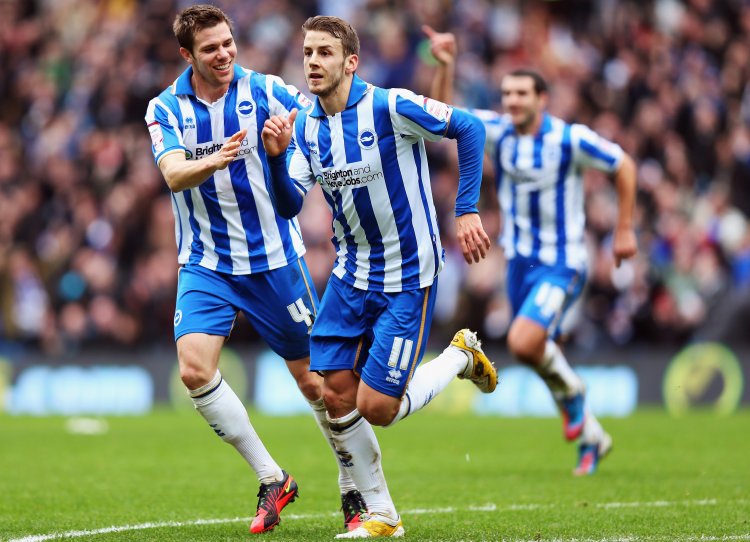 Brighton & Hove Albion have their name recorded in the story of a team rising from the bottom tier of England’s Football League, with Hull, Swansea and Bournemouth among the most recent examples.
But few of those tales have been more remarkable than that of Brighton & Hove Albion, whose promotion to the top flight was confirmed with victory over Wigan on Monday.
BBC Sport speaks to pundits, players and manager Chris Hughton about the Premier League newcomers who, just 20 years ago, were battling to stay in the Football League.
It took until the very last day of the 1996-97 season before Brighton could breathe easy, as a 1-1 draw with Hereford secured their league status.
Despite the result, Brighton’s former owners went ahead with the sale of their old Goldstone Ground, leaving the club to share Gillingham’s Priestfield Stadium for two seasons.
The club then moved back to Brighton, playing at the Withdean Stadium – a site not originally built for football – before finally switching to their current Amex Stadium home in 2011 under the ownership of Tony Bloom.
“What happened on Monday is just the sensational fulfilment of so many people’s dreams,” said BBC pundit Mark Clemmit.
“The one name I keep thinking about is Dick Knight, who sort of galvanised everybody in 1997, because don’t forget not only did they nearly go out of the league, but they lost their stadium then as well.
“The owners at the time kind of pulled it from under the club, and have never ever been forgiven by the supporters.
“It was Dick Knight who picked it up by the bootstraps, plus several others that accompanied him – but he was the majority shareholder.”
Brighton had looked destined to complete their journey from bottom to top 12 months ago, but a 1-1 draw with Middlesbrough on the final day of the regular season meant they missed out on goal difference.
Further disappointment was to follow, as their hopes of reaching the Premier League were dashed with a 3-1 aggregate loss to Sheffield Wednesday in the play-off semi-finals.
It was not an unfamiliar feeling for Seagulls fans, who had suffered defeat at the same stage in both 2013 and 2014.
“I’m incredibly proud of the way they’ve bounced back – but there are no surprises,” Hughton, 58, told BBC Sussex. “We’ve got a group of lads that are capable of doing it, but being capable of doing it and doing it are two different things.
“They’ve been good all season. They’ve bounced back, they’ve shown a really good determination and a real desire to want to win as many games as possible.”
Brighton captain Bruno added: “It’s been five years now for me and it’s been hard because we were really close to getting promoted for three seasons.
“Last season was tough for us and we were really close – but this season we’ve been outstanding.

KING OF COMEBACKS? Barcelona Can Do Magic Again Against Juventus – Neymar