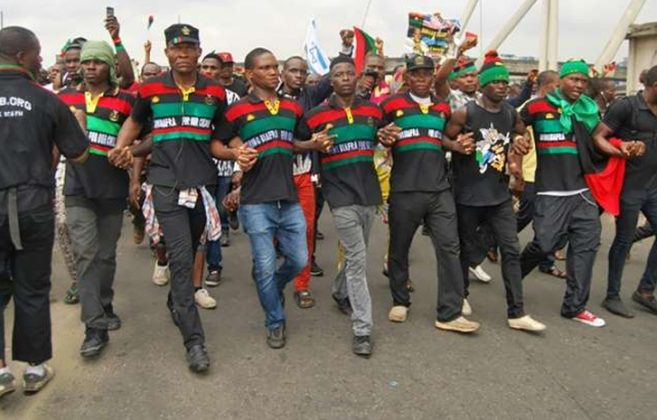 The Indigenous People of Biafra, IPOB, on Wednesday, warned the police against attacking mourners during the burial ceremony of the parents of its leader, Nnamdi Kanu, Eze Israel Okwu Kanu and his wife in Afaraukwu, Abia State.

IPOB warned that the police would be setting up a chain reaction that Nigeria may never recover from if mourners were attacked during the burial ceremony.

The traditional ruler of Afaraukwu community and his wife, who died last year would be buried on Friday.

Ahead of the burial, the Police Commissioner in Abia State, Ene Okon, had warned members of IPOB to stay away from the ceremony

Okon had threatened that the police would scatter the burial ceremony.

But Kanu vowed to hunt down family members of the Police Commissioner and his officers should they carry out their threats.

However, IPOB’s spokesperson, Emma Powerful reiterated the group’s call that security operatives should stay away from the burial event.

A statement signed and sent to DAILY POST reads: “We the global family of the Indigenous of People of Biafra (IPOB) wish to reiterate in clear and unambiguous terms that what Nigerian police and army are planning to do in Afaraukwu during the burial of Eze Israel Okwu Kanu and his wife on Friday 14th of February 2020 will set-off a chain reaction that Nigeria will never recover from.

“Common arbitrary arrest of any mourner this week Friday is capable of inciting a disproportionate reaction from angry mourners. IPOB is warning all agents of the Nigerian government in Biafraland, traitors and caliphate slaves alike that what will befall CP Okon will also be their portion should shot be fired in Afaraukwu. The era of Nigerian army and police shooting innocent mourners in Biafraland has come to an end.

“What is happening in Umuahia with the provocative presence of Nigerian army and police is an insult to the people of Biafra and the Igbo race in particular. All those that have in various ways supported the unprovoked murderous clampdown on IPOB will pay dearly for it.”

Evans, The Kidnapper Arrested For Robbery In...