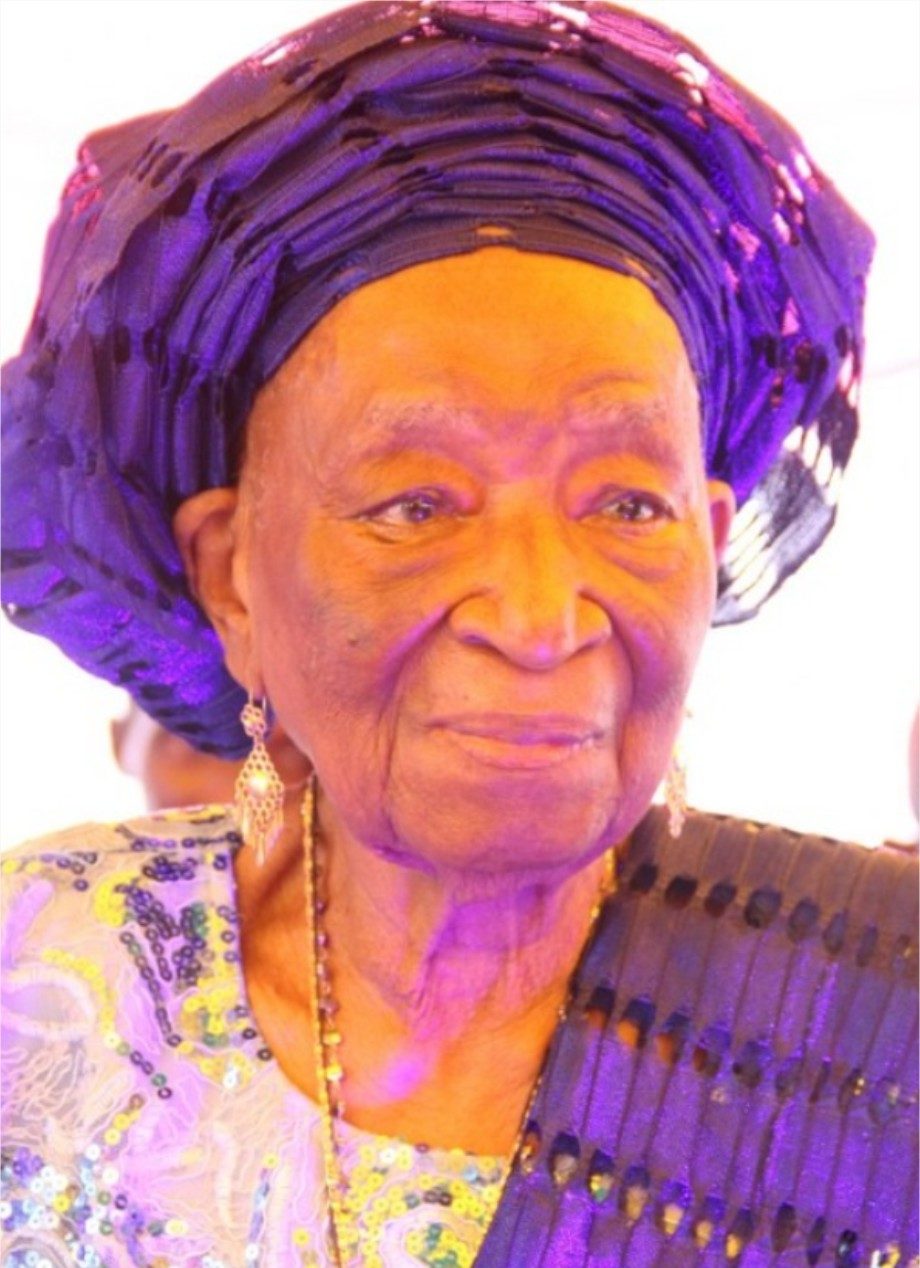 It was a day of joy for Mama Ake, as she sat in a large sitting room, receiving guests as a big smile played on her face while she expressed appreciation in prayers. All her family members came in their numbers hailing Mama Ake as she also responded with joyful smile and widely opened hands to hug her children, grand children and great grand children. Though she is 90 years old, she posesses the strength of a youth and there is happy aura around her.

During the celebration, Madam Aduke Coker joyously engaged City People Reporter, DAMILOLA  AKANDE, in a chat where she revealed how her life went in the past 90 years. Below are the excerpts of the interview.

Can we know your name?

My name is Mrs Oriyomi Aduke, the daughter of Mr. Famuyiwa and Mrs. Abigel, married into the Coker family. I was born in Abule Ayigbajo at Wasimi in Abeokuta.

Tell us about your education?

I did not go to school; I was 9 years when my grandmother took me from my father owing to her experience with having ‘Abiku’ children. There was a time when I was still in school, I was flogged by my teacher and my grandmother got furious and declared that I would not be going to school anymore. She loved me so much that she did not want anyone to chastise me. She told my father too that she had decided that I wouldn’t be going to school and my father called me to ask if it was true and I affirmed it. But before my grandmother died, she asked for my forgiveness. She said she did not know that education was the way to go.

How did you feel when your grandmother stopped you from going to school?

I was actually happy when she said I wouldn’t be going to school. I was closer to her, so I took up her trade which was the sales of locust beans “’Iru” and stock fish “panla”, I always accompanied her to the farm too. Anytime I saw my father coming I would run away, so he would not talk about going to school. My father then was a railway officer in Ibara, so he always came down to visit me at my grandmother’s place every weekend. He would then tell me to come in that he would not beat me, but remind me that he wants me to go to school, but his mother did not allow it.

Tell us about your other siblings?

We were given birth to in the following order, Funmilayo Awele, Oluyinka Iyanda and Olukunle Adigun, who was born at “Oke Oya” and was born after me. We are all alive besides Oluyinka Iyanda, who died some years back.

Are your other siblings educated?

Yes, they went to school, but only Olukunle Adigun was opportune to go through to all the forms of school.

I had a husband, the love of my life. He was from Abeokuta. I left the farm where my grandmother lived because I did not want to get married in the village. I met my husband in ‘Shekoner’ in Ile Ife. I sold food there. He was not the one I wanted to marry, but he was smart enough to take me from him. I was living with my uncle, Mr. Obimakinde. We popularly called him Baba ‘Shekona’. My husband went to meet my uncle to talk about his intention while the other educated man was playing games with me.

Were you met a virgin?

Yes, I was met a virgin and my husband paid for it, I remember he paid 11 shillings for my virginity.

Did you get to know your mother-in-law?

I did not meet with her until 13 days to her death, I met her on her sick bed. It took long to meet her because I was not ready to miss my virginity without a proper marriage rite do. Girls of this day would not have waited that long as this is what men do to lay with them.

How many wives did your husband  got married to?

My husband got married to 6 wives and I was the 2nd, the first wife was Madam Tejumola, who was his legal wife as they got married in a Catholic church. I knew about her before we got married. He later married 4 other wives after me.

We had a wonderful relationship among ourselves. In fact, we ate from the same pot. When Madam Tejumola collected money from our husband as the first wife, she would hand it over to me as the 2nd wife then I would give it to Iya Ibeji as the 3rd wife. When our husband married Iya Ibeji after me, she was coming from her first marriage so she was older than me. She respected me as her senior wife and I respected her as my elder in age. For example when we were eating I ask her to pick a piece of meat first and all of that. We also showed love to all our children in the same manner we show love to our individual children. It is sad that Iya Ibeji is late now.

What did your husband like about you and your mates?

My husband was hard on us, they referred to him as ‘Sango’ that was how he was. This made me and my co-wives become one. One of us could single handed handle him. If he threatened to send any one of us out, all of us would come out with force against him.

Can you tell us about your husband’s last days?

I remember when he was on his sickbed; he cried begging me not to leave his home after his death as he knew that none of his wives would stay back owing to how he had been dealing with us and his house would be locked and forgotten. I agreed with some conditions too. I told him I would sit in his house only if he agreed that when my children give birth I would spend 3 month for every first child of our children and 90 days for their remaining children. He agreed and that is how I have done it.

Do you still have a relationship with your husband even after his death 36 years ago?

Yes I do, I still see him in my dreams; I still saw him 3 days ago and he came to wish me a happy birthday. When I wake up every morning I go to were his portrait is and pray for all our children because he asked me to sit in his house. In fact I still sleep with his cover cloth since he died 36 years ago.

How do you maintain this strength that you have as a 90 year old woman?

It is mainly the grace of God and the spirit of patience that can help you live long.

How I Met My Late Husband, Prophet T.B JOSHUA – Wife, EVELYN Opens Up