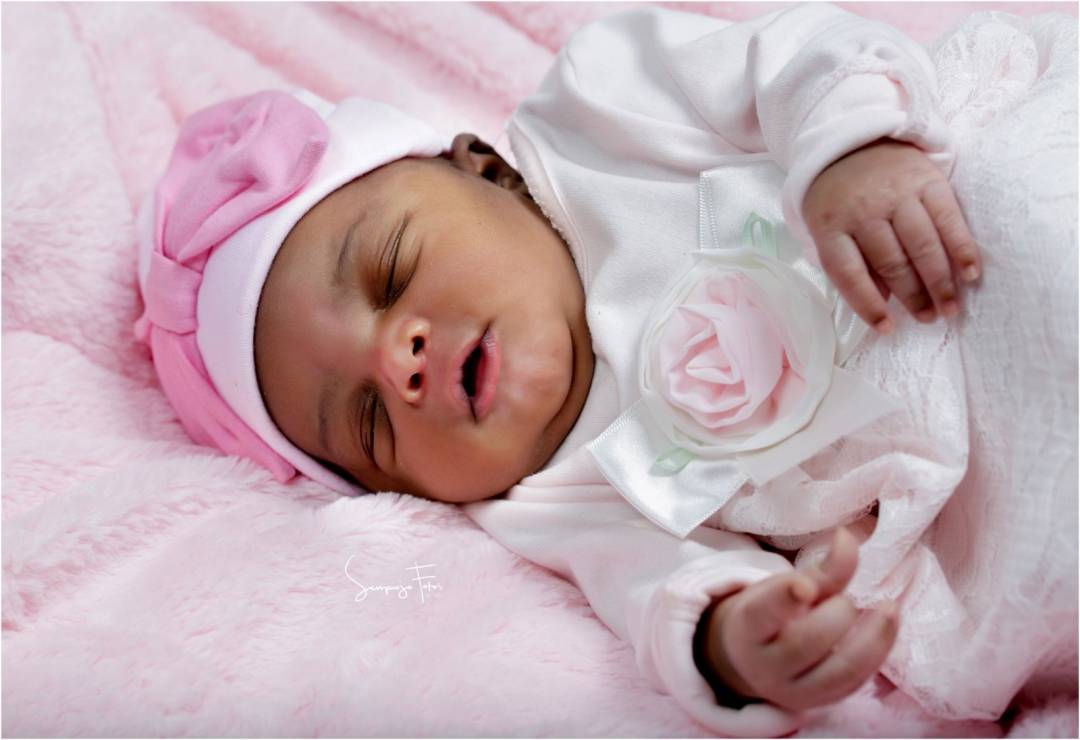 The whole stretch of  road leading to the GRA home of Fuji icon, King Wasiu Ayinde Marshal  popularly called K1 was filled  with exotic cars on Friday 21st April, 2017 when he christened his new baby. The baby girl was given birth to few days ago in the US but the excited father (K1) planned to have a grand party come this July but decided to christen her for the compulsory 8day Islamic rite. City People Assistant Society Editor, ABIOLA ORISILE was at the grand reception to serve you spicy gist about how the events went. Enjoy it .

The Islamic group of Muhtadeen Islamic Foundation were one of the early callers at the naming of K1 new daughter. They were led by the Chief Missioners Sheik Isiaq Agbarigidoma. He spoke about what Islamic faith said about naming of one’s child. He also analysed what K1 and the Baby has in common. He explained that, K1 was given birth to on Friday, same with his new daughter. Though, the mother of the child, Titi Masha was in far away America but she was opportuned to watch the whole naming on video call. The Muslim clerics also spoke extensively about how much the parent of K1 wife, the Masha Eshilokun are lovers of Islamic faith. He later announced the her name as Princess Faweezeyah Adebosipo Melissa Olasunkanmi  Akanke Marshal. Other Muslim clerics at the event were Sheik Abdulai Akolade,  Alhaji Abdul Lateef Ridoh and Alhaji Ismaheel Ahmad Tijani.

Immediately after the naming, at a few minutes past 1pm, the whole guests were told that there was a mosque at Ojusagbola Mansion and guests can offer their compulsory Jumat service there.  Sheik Agbarigidoma explained in cleared terms on the need of a Muslim faithful to be thankful.  He revealed that even those who didn’t give birth should also be thankful to Almighty Allah.

AND K1 NAMED HIS NEW BABY AFTER SELF

Many of the guests who were in attendance were shock to the marrow when at few minutes past 1pm the baby names was announced and it was obvious that K1 named the new baby after self. In a chat with K1, he reveals that, though the name may sound masculine but there are lots of women who bear Olasunkanmi. He explained further that moment is one of the things that have made him named the new baby after himself. He also explained that baby Faweezeyah will be having a grand party on her return to Nigeria in the next couple of weeks.

Titi Masha, the pretty wife of Fuji Lord, King Wasiu Ayinde loves to look good no doubt. She is not just into fabric, she stock the best fabric. Though she was still in America when the party was held but on the day of the naming, she had a photo session with American celebrity photographer, Scorpioojo, he was handsomely paid to take the memorable moment. She was clothed in 650 thousand Magenta and Ivory fresh lace from the stable of the luxury HKG Swiss lace. She adorned it with Magenta colour net Siego lace while her beautiful make-up was done by Kubzyklassic Makeover.

Give it to K1‘s wifes Mother, Alhaja Mosun Masha, the Ceo of M&M a leading fabric shop in Idumota. She was cynosure of all eyes in a Magenta Brown HOS special lace matched with a unique diamond set. Though, her daughter was far away in America but she didn’t leave any stone unturned to make sure the party was grand. She came with over 100 cloth fabric merchants to Ojusagbola residence. She walk like a Queen in her red Reni Italian Slippers.

Do you know who Titi Masha God Mothers are? Well, it no other than Alhaja Fatimo Adegunwa and Alhaja Sadiat Abu Oloto aka Iya Oyo. Alhaja Fatimo, the wife of Foto Teck boss has been Titi‘s Godmother right from  her days at Ballerby‘s College in College. She will go to pick Titi from school when she is on holidays to their London House and she has not stopped the motherly role till date. So also is Alhaja Sadiat, She is not just Titi’s God Mother, their closeness also made K1 named his daughter Akanke which is Iya Oyo Oriki.

BETWEEN SADE ADESOYE AND HER UNIQUE DIAMOND COLLECTION

There is no doubt that Sade Adesoye is a hot stepper any day any time. The CEO of the upscale diamond shop called Jewellery affairs, surely knows how to rock her unique precious stones at any high octane events. She was cynosure of all eyes when she stepped into the event at few minutes past 3pm with her handsome husband, Otunba Balogun Adesoye at the Ojusagbola mansion. Her green and touch of white HOH lace matched with her silver diamond that kept talking while she moved.

It was an array of many Lagos society men. One of those that was visibly present was K1 best friend, Otunba Akin Fijabi, Lekan Osifeso, So also is Bashy Kuti, NURTW Big boy, MC Olu Omo, Baba Onimalu, Alhaji Bisala Ajiroba, Suyveryor, Olaya Igwe, Muphy Ray, Lanrewaju Ijakoko, Kunle Rasheed and many others were all in attendance.

Revealed! 40 Parties That Rocked IBADAN In...