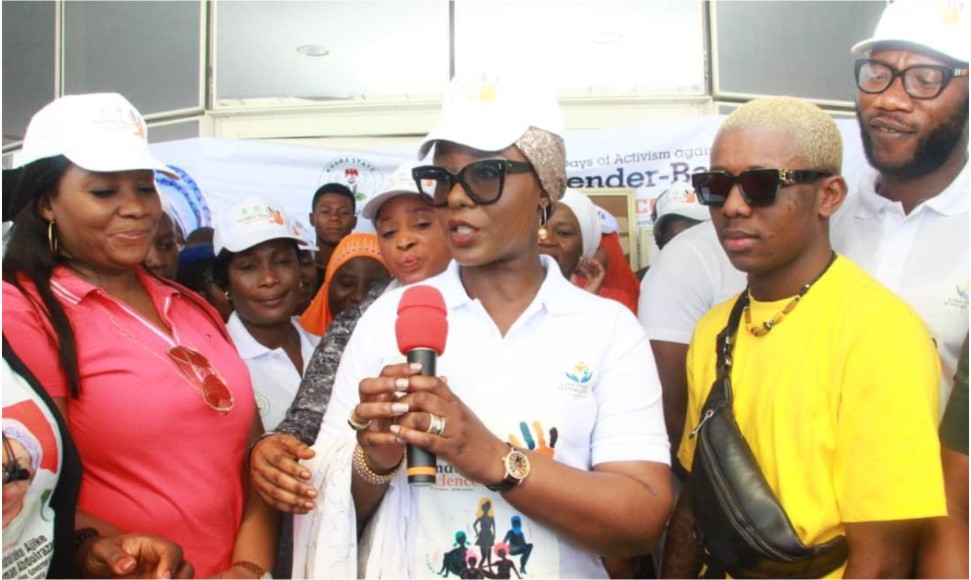 Kwara State First Lady, Olufolake Abdulrasaq on Saturday, November 30th 2019 led thousands of women on a street walk against gender-based violence and sexual abuse in Ilorin, the state capital, calling for mass support against the scourge. The rally, which began at the Kwara State Banquet Hall, saw the women walking through the popular Ahmadu Bello Way through to Challenge, Post Office, Sulu-Gambari Road and back to the starting point. Most of the walkers carried placards with inscriptions like Stop Child Abuse, Walk Against Rape, End Rape, Keep Hope Alive, and Kwara Says No to Domestic Violence.

Themed ‘Count me in, together we move Kwara forward’, Mrs AbdulRazaq said the advocacy walk was to create awareness on the prevalence of gender-based violence with a view to stemming the tide.

“Each year on the 25th of November, the world commemorates the International Day for the Elimination of Violence Against Women and the ensuing 16 days of activism against gender-based violence, culminating in human rights day on December 10th. These events provide a global platform for action by governments, organisations and individuals to mobilise and draw attention to the urgent need to end gender-based violence,” she said. She said gender-based violence comes in different forms and could be found in the family, community and in the society.

“It is an act of violence that results in or likely to result to physical, sexual or psychological harm or damages to the woman, including threats of such acts, coercion or arbitrary deprivation of liberty, whether occurring in public or private life,” the First Lady said. She noted that the most pervasive form of gender-based violence against women is rape as it affects all women regardless of their ages, race, culture or socio-economic stature.

“As you may be aware, in June this year a 60-year-old man allegedly raped a 4-year-old girl here in Ilorin, it took the intervention of my office and the Kwara State Ministry of Women Affairs and Social Development to get the said man to face the consequences of his action, while the care of the survivor was taken over by the ministry.”

Mrs Abdulrasaq explained that gender-based abuses were rooted mostly in the patriarchal beliefs, power and control that continue to create a social environment in which sexual violence is pervasive and normalised.

She expressed concern that the exact numbers of rape, sexual abuse, and sexual assaults were usually difficult to confirm due to the impunity of the perpetrators, stigma towards survivors and their subsequent silence. “Being aware of this, I founded the Ajike People’s Support Centre where indigent women and youths can access empowerment through vocational skills acquisition and girls through scholarships for their education,” she said. “When women and girls can live free from violence and are afforded equal opportunities in education, healthcare, employment and political participation, they will lift up their families, communities and indeed the country.

“There is a need for us to eschew all manners of abuse and gender-based violence and to depart from the usual practice of treating cases of abuse with silence. Where incidents of abuse occur, the perpetrators should be made to face the consequences of their actions, while the survivor is provided with help and counselling.”

AbdulRazaq called on the law enforcement agencies, traditional and religious leaders and other stakeholders to key into her drive to end all forms of abuse and gender-based violence.

Chairman of the Kwara State House of Assembly Committee on Health, Razaq Owolabi, urged parents to monitor the movement of their children, particularly females, to guide against all forms of abuse. The State Head of Service, Mrs Susan Oluwole, also called for collective responsibility in checking child abuse and sexual violence in Kwara State.

The Kwara First Lady, Olufolake Abdulrasaq has been known for sensitive initiatives such as this which was borne out of her passion when she floated a non-governmental organization, NGO years back known as Ajike People Support Centre fashioned towards improving the health and wellbeing of women, youth and children through advocacy and community development initiatives. She is an extraordinaire diplomat who rose to an enviable and peak of her career in few years. Despite saddled with the responsibilities of the office of the First Lady, she is the Director of Economic consular and Legal Department, Ministry of Foreign Affairs. Until her present position, she was the Acting Director, Trade Investment and Economic Cooperation Division, the Minister/Head (Consular Education and Welfare Section, Nigeria High Commission London. She was the Minister/Deputy Head Industry, Trade and Investment, Nigeria High Commission London. She was the Minister/Deputy Head Immigration and Deputy Director/Minister Commonwealth at the same organization. She was at a time the Assistant Director, Ministry of Foreign Affairs Abuja Nigeria, Assistant Director, Embassy of Nigeria Paris and Minister Counsellor, Ministry of Foreign Affairs Nigeria. She was at the position of Senior Counsellor at Nigeria High Commission Pretoria, Counsellor at Nigeria High Commission London and Third Secretary at Ministry of Foreign Affairs Lagos Liaison Office.