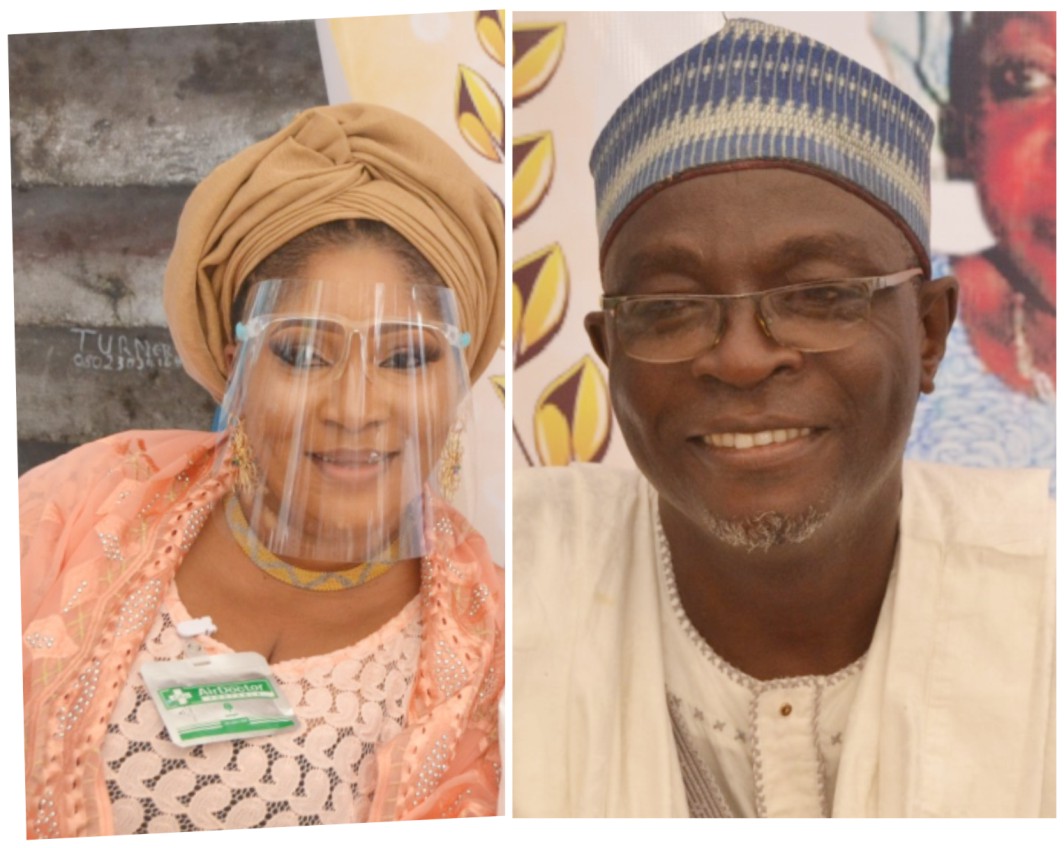 The words of Thomas Campbell “To live in hearts we leave behind is not to die” came to the fore on Sunday, January 17, 2021 as popular Lagos Lawyer, Ronke Ajide and her siblings held a 2-in-1 ceremony for their parents. It was the 30th remembrance of their father, late Alhaji Abdulraheem Adetokunboh Ajide and the first remembrance of late Alhaja Risikat Omotara Ajide which held 104, Clegg Street, Surulere, Lagos.

At the event, family, friends, close associates and neighbours all gathered to celebrate a well-spent life. Late Alhaja Risikat Ajide, in her lifetime, was a philanthropist who had affected many lives in a positive way. She was born in 1952 and spent about 68 fruitful years before inhaling her last breath exactly one year ago at her home in Lagos. And her loving husband, who had passed on 29 years earlier, on the 3rd of February, 1991.

It was an array of top Islamic cleric from Lagos and beyond. They were from different towns and states. The event officially kicked off when top cleric sheikh was asked to say the opening prayer and other top clerics on the seat were introduced: some of them include Sheik Alhaji Abdul Rahmon Sulaimon Adangba, Sheikh Abdul Hammed Atata, Alhaji Abdul Rasak Haidara, Alfa Monsuru Omo Aderoju, Chief Imam Ajiferuke Mosque, Chief Imam Adejumobi Mosque

Barrister Ronke Rasidat Ajide is the eldest daughter of late Alhaja Risikat Aramide. She is a Lawyer who has paid her dues in the legal profession. She was the chief host of the event. In fact, she was at the event on time to ensure that everything went as planned. But that is not even the big gist. The big story here was her attire. She was dressed in a very beautiful peach colour lace. It was a well-styled gown that perfectly matched the occasion. A glimpse of her footwear revealed that it matched her bag, headgear and earrings. Of course, everybody who knows Barr. Ajide knows that she is a very stylish lawyer and she didn’t go below her standard. Her dress game was tight and on point. Little wonder she was the centre of attraction for all eyes.

Popular Muslim cleric and a well-read scholar, Sheik Alhaji Abdul Rahmon Sulaimon Adangba admonished everyone at the event to live a life worthy of emulation. He further reiterated that everyone in life is born for a particular purpose and that the central purpose is to liberate others. In his exhortation, Sheikh Adangba stated that Allah is the most compassionate and most merciful and that he deals with individuals based on his compassion for them. He, therefore, prayed that Allah would have mercy on the departed souls and their children who are still living. His session was concluded when the other clerics on seat took out time to pray for the children, grandchildren and other extended family members of the deceased.

Did we tell you that the event held amid serious adherence to COVID-19 precautions? Yes, it did. Virtually everyone at the event wore a face mask. In fact, the invitation had a bold inscription on it “please come along with your face mask.” Aside from this, it was a less crowdy event. The people in attendance didn’t even number up to 100. And the event held in an open space, there was enough from for cross ventilation.

The scene of the event from afar looked like a gathering of angels. The reason was not far-fetched, many of those in attendance were dressed in white, the colour of the day. Both men and women including top shots all came in different shades of white which added glamour to the occasion.

Sheikh Abdul Hammed Atata a popular Muslim cleric in Lagos and Ogun States stormed the event against all odds. He arrived alongside members of his entourage who accompanied him. He took another round of prayer session for the departed and the families left behind. During his session, he stated how intimate he was to the late Alhaja Risikat Ajide. He eulogized mama stating that her philanthropic gestures to all and sundry during her lifetime has gone ahead of her to speak for her before Allah and that as such, her children would also benefit so much favour from the people around them because of her good deeds. He further encouraged others to emulate the deceased so that posterity can also speak for them at the end of their days.

As small as the gathering was, Alhaja Rashidat Ajide’s personality still brought men and women of timber and calibre to the event. Society men and women came one after the other to grace the occasion and showed their love for the Lagos based lawyer. Some of them include Hon. Saheed Salawe (SS), a politician and lawyer, Hon. Hakeem Alobo-Bakare, a Lagos based politician and businessman, Yeye Oge Remi Talabi, Dr Mrs Ifeoma, Princess Aderonke Jimoh, a business tycoon and royal princess from Oyo.