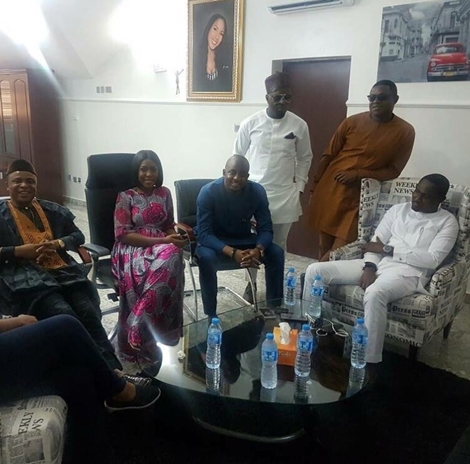 Self acclaimed richest and most popular blogger in Africa, Linda Ikeji and Nollywood actor, Jim Iyke have put their differences aside for a good cause as they have settled their beef and hung out with other people at Linda’s office in Lekki, Lagos.
The handsome actor took to his Instagram page and shared some photos from his visit on Instagram and wrote;“YDO brainstorm with my sis Linda Ikeji at Linda Ikeji Media. #OurVoiceMustBeHeard #LIGHTHASCOME #YDPChronicles”. Recall that few years ago, the two stars were engaged in a hot social media fight over a misunderstanding on some blog post. Although Jim later apologized after realizing his mistake.
Then a year later, Linda posted a topless photo of the actor with the caption ‘Jim Iyke Shows Off Six Pack’ and added the following underneath, ‘Every time I write about this dude he comes after me on Twitter, but I must do my job na…lol. Nice body’
Some minutes later, someone told Jim about the post and he replied back calling Linda a ‘hermophrodite’
Photos from their new meeting show that they have finally let bygones be bygones.
See another photo from his visit to Linda Ikeji’s studio below; Meet the World’s Tallest Boy Who is...