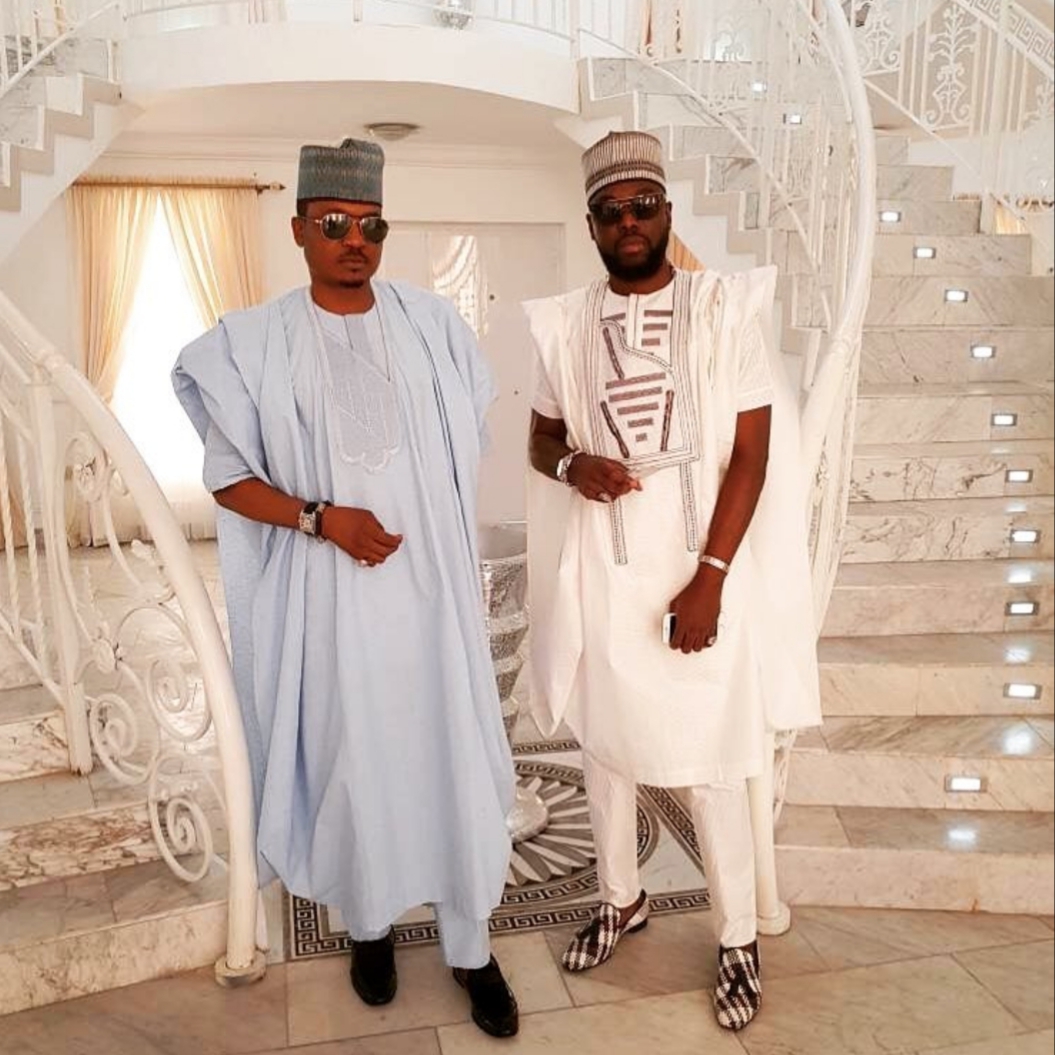 The Ibadan social establishment, like every other across the country, keeps evolving every day. New breeds of socialites are springing up while the old ones are still very much around.

There are three categories of socialites in Ibadan; the old and stinkingly rich socialites, the middle and upcoming and upwardly mobile celebrities. From any category or age, one would want to talk about, however, there is no way you talk about Ibadan social establishment without mentioning the likes of the former Aare Musulumi of Yoruba land, late Arisekola Alao; Chief Lamidi Ajadi; Chief Lateef Oyelade etc.

Then comes the set of Otunba Reuben Famuyibo, Chief Akinade Fijabi, Asiwaju Gani Shonubi, Tunde Ologburo, Bashir Kuti, Soji Akanbi, Gbenga Obembe and others. They are all big names to be reckoned with as far as the Ibadan social establishment is concerned.

They are show stoppers any day, any time and they make parties thick within and outside Ibadan, except for Arisekola who is late. But as it is now, new set of socialites seem to have coming up.

Though some of them have been around for a while but probably because they love to keep a low profile, we hardly talk or write about them but they are very much in tune with social happenings around them. Some of them are also very rich but don’t draw unnecessary attention to themselves.

But whether old or young, one thing is certain, Ibadan social establishment is hot and they can’t be pushed aside by their counterparts from other zones. They are unique and stylish too. Any social gathering they found themselves, they must make a statement either through their styles, looks, achievements or what have you.

They are not called socialites for the fun of it; they are truly sociable and successful in their various chosen fields. That is why any social gathering that worth its salt must have one or two of them in attendance.

In this special report, City People’s Correspondent, Dare Adeniran presents to you list of ten hot new big boys presently rocking Ibadan social scene. Their ages fall between 40s and early 50s. They are the ones who make party thick in Ibadan and they cut across different social circles and clubs. Enjoy it.

ENGR LEKAN TAIWO
Lekan Taiwo is an engineer by profession. In fact, he is a Fellow in that field but loves and cherish his privacy. He is rich and handsome, there is no doubt about it. One thing however always gives him out; his style.

He dresses well, whether in native or English wears; he knows how to do it right. These, coupled with his good looks, his antecedents and achievements in the engineering profession has earned him respect in Ibadan social circle and any party he attends, he must make statement. He is happily married to a beautiful fashion designer and wardrobe consultant, Mrs. Toyin Taiwo of Tyte Looks Fashion House.

KOLAWOLE KAZEEM
K.K, as he is fondly called in Ibadan, is an auto dealer. He is super rich and famous among the new generation of socialites in the ancient city. In fact, he loves and enjoy seeing people around him. He is so generous. That is why he is well loved and respected too. K.K do not only has a deep pocket, he is highly sociable. He works hard and play hard too, he doesn’t mix the two. It won’t be out of place to call him a socialite per excellence. Above all, he is not bad looking and dresses well also. He is the king of dealers at Oke-Ado axis where his office is located and has many properties scattered all over Ibadan.

TAIWO SALAMI
Do you know him? If the answer is yes then we are on the same page. If not, let’s tell you about him. Taiwo Salami is from the prominent Salami clan of Eleta, Ibadan. Yes, son of the same late Chief Lekan Salami, whom Adamasingba Stadium was named after.

Taiwo is no doubt one of the happening big boys in town. He is relatively comfortable and well connected, as he would love to be described. Because of his background and all, he belongs to the class of those that could be called the ‘alakowes’, but he is sociable and stylish.

He was a big gun in the telecoms sector before venturing into business. He owns the popular Apollo’s Lounge/Night Club inside Palms Shopping Mall on MKO Way (formerly Ring Road) and other businesses in Ibadan.

TOLA AKANBI
He is a well known property developer in Ibadan. The Chairman/CEO Clinton Estate, Tola Akanbi know his onions in business. He is very rich and sociable. His fully developed estates are scattered all over Ibadan. In fact, he has another ongoing estate project near the popular Vale College in Iyaganku GRA, Ibadan. He is one of the big boys rocking Ibadan social scene.

JIDE
Jide owns and runs Capital Inn hotel in Ibadan. He is not new in Ibadan social circle but he is gentle and cool. One thing that sets Jide aside is however his business acumen and good mien. He deals with people with maximum respect and equity irespectful of their age and background. His social connection is as strong as his business’.

KUNLE BUSARI
He plays big in the hospitality sector in Ibadan. He is the CEO Euro Hotel in Oluyole Estate axis of the ancient town. His hotel is a standard one, as Kunle Busari is known for having high taste for good things. He doesn’t joke with standard and when it comes to style too, he is always on point. That is why is loved and respected on the social scene.

KAYODE OGUNLOWO
Kay, as he is popularly called, is also an auto dealer. He is young, rich and very popular; not only among the young generation of socialites but also among the elders. In fact, he could best be described as the bridge between the three categories of socialites in Ibadan.

He is respectful and carries himself with so much diginity and class. Apart from money and excellent demeanor, another thing Kayode has going for him is, his looks. He is fresh and handsome and he knows how to play with his style. Though Kayode is happily married; he loves and cherish his wife but he is a ladies’ man any day, any time. He is also a good planner and an excellent host as well. That is why top celebs always love to have him at their parties.

WALE OJO
He is popularly called Wale ‘Awake’, his business name in Ibadan. Awake is a household name in town and that is probably the hottest telecommunication retail store in Ibadan. To say, Wale, like his business, is popular in Ibadan is like stating an obvious; he is well connected. He is rich and handsome and knows and has what it takes to be a socialite.

In fact, Wale is a party rocker any day, any time. He is always prepared, he goes to parties with his personal drinks. And he drinks Hennessy mostly. His best friend is Wale Fowosere (Omo Gafo). Wale Awake also plays big in hospitality and property sectors.

MR WHITE
Call him the king of entertainment, it won’t be wrong or a money-making machine, you will still be on point. Mr. White, as Moshood is popularly called, is rich. He is a big-time entertainment promoter who shuttles between London and Nigeria. In London, he is a big boy by all standards. At home, he is well established too. He always dazzles at parties.

Mr.White Entertainment is one of the hottest in London. There is something very unique about Moshood, he loves color, White. His all-white mansion at Kolapo Ishola Estate, Akobo confirms this fact. He is a super-rich dude with powerful connections that cut across.

His best friend is the young and vibrant Federal honourable representing Iseyin/Itesiwaju/Iwajowa/Kajola Federal Constituency in Oyo State, Shina Peller. They have many things in common, they are both successful young entrepreneurs and play big in entertainment.

While Shina Peller is doing wonderfully well with his Aquila Group of businesses, Moshood is also turning his Mr. White Entertainment into a brand. Those who know the stuff Mr. White is made up of can testify to his high taste. He doesn’t do things just like that, his last party (end of the year party) inside his Akobo mansion is still talk of the town till now.

KAYODE ADELAKUN
He is a Fellow in the engineering profession and the former President of Rotary Club in Ibadan. Kayode ADELAKUN has a good antecedent and success worth talking about. He has a very rich and good C.V in both academic and social circles. He is well-loved and respected among top celebrities in Ibadan. He is Engr. Lekan Taiwo’s best friend.

DURODOLA ABIODUN
For those who may be wondering what his name is doing on this list. Biodun Etu, as he is popularly called, may not be as rich as those earlier mentioned but he is comfortable and doing well for himself. Above all, he is highly sociable and stylish. He dresses well so much that even some top celebrities do appreciate his dress sense at parties.

While being stylish seems to be an inborn thing for Biodun, he must have gotten one or two style traits from his late mentor, Lekan Abass, as well. Biodun, like his Lekan Abass, is a fashionista. He pays attention to details when it comes to style and he is always comfortable in whatever dresses he puts on. Sometimes you may see him in ‘Kembe’, and next, it may be walking stick. If you don’t know, Biodun is also a tailor and fashion designer; he runs IyiCollection.

50 Reasons Your Prayers Won’t Be Answered...