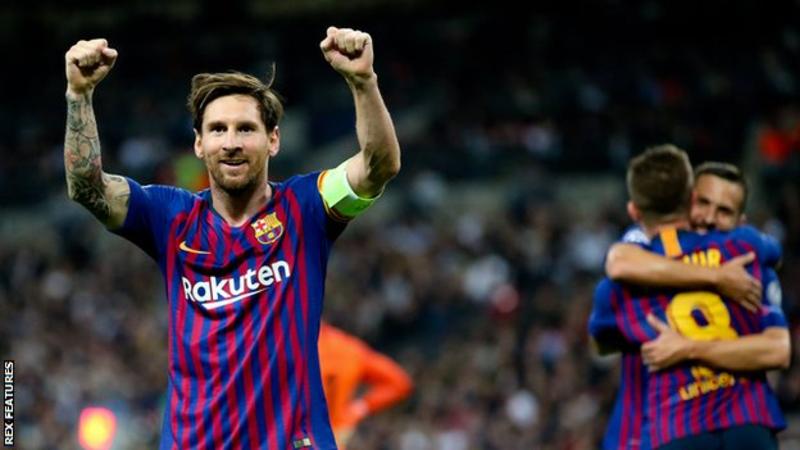 Lionel Messi produced a Wembley masterpiece to condemn Tottenham to their second successive Champions League defeat as they were beaten by Barcelona at Wembley.

Messi was the magnificent orchestrator behind a superb attacking display from the Catalans that eventually proved too much for spirited Spurs, who also lost their opening Group B game to Inter Milan in Italy.

Spurs keeper Hugo Lloris, back from injury, gifted Philippe Coutinho Barcelona’s opener inside two minutes with a reckless dash from goal before Ivan Rakitic put them further in control before half-time with a spectacular 20-yard strike.

Erik Lamela’s deflected effort set up a grandstand finish but it was fitting that the peerless Messi had the final word with a simple strike after Luis Suarez’s brilliant dummy.

The defeat leaves Mauricio Pochettino’s side third in the group, six points behind leaders Barcelona and second-placed Inter Milan and facing a difficult task to progress to the knockout stages.

In the pain of defeat, Tottenham’s fans reserved plenty of acclaim for the magical Messi after another Wembley masterclass.

The debate about the greatest player of all time is always guaranteed to spark passionate discussion, but on nights like this, it is simply a pleasure to witness the work of a genius without having to make a decisive judgement.

Messi may be 31 now but his brilliance is enduring and undimmed, summed up by one blistering spell in the opening phase of the second half as Barcelona attempted to press home their 2-0 interval advantage.

The Argentine twice glided over a wretched Wembley surface, demonstrating that uncanny ability to move quicker with the ball at his feet than without it, but with the Spurs defence in panic-stricken retreat he struck the base of the post with sidefoot finishes on both occasions.

Spurs had no escape, however. Twice they thought they had fought their way back, twice Messi snuffed out their hopes.

He was the beneficiary of delicious dummies from Coutinho and Suarez to restore their two-goal advantage after Kane had pulled a goal back for Spurs, and was on the end of another brilliant feint from the Uruguayan to wrap things up after Lamela had again given the home side hope.

Messi is quite simply a phenomenon. He has a tremendous work ethic, an ability to influence all areas of the pitch and makes the decisive contributions when they matter. He thinks more quickly and more imaginatively than any other player in the world.

And, as one final flourish in the closing seconds, he produced a blind backheel to Suarez that most footballers on the planet would not even think about, let alone pull off.

Messi was magnificent at Wembley when Barcelona destroyed Manchester United in the 2011 Champions League final, an occasion which saw him score his first goal in England in the Catalans’ 3-1 win.