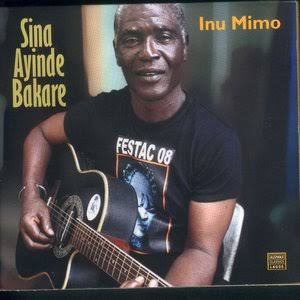 Sina Ayinde Bakare was born at Massey Hospital on 6th of September, 1945. His father is a native of Kwara State and his mum is from Epe. His family house is located at Okesuna Street Lafiaji Area beside Late Tunji Braitwaite house in Lagos.  He attended St Davids Primary School Okesuna. He is the son of the legendary juju music icon Ayinde Bakare popularly known as Mr Juju. Young Sina while growing up enjoyed watching his father during rehearsal and after rehearsal he was always saddled with the responsibility of cleaning all the local instruments used by the band ie Sekere, tambourine, Conga, guitar. Sina recalls that he always sneaked into the instrument room to twang the guitar then as a standard four student of St David’s Primary School. His passion for the guitar became more intensed every time he hears the sound that rang out from the Balm Beach Box Guitar known as Palm Wine Guitar. He became more versed in the understanding of the guitar chords when Sir Victor Uwaifo the highlife music legend introduced different books about guitar to him. ie Guitar Tuition  called Fransic Day,  Hunter Guitar book and Uwaifo gave him the address from England which he ordered the books  from 122-124 Charring Cross Road London in ,1957.  Sina Ayinde Bakare who is popularly revered to as Like Father Like Son is one of the legends of juju music in Nigeria who is still active musically.

Our Music Columnist Ajike caught up with this veteran after a television broadcast held for him in Lagos last week and had this interview with him.

Sir Where is Shina Ayinde Bakare from?

I am from Kwara State Balogun Ajikobi Compound Ilorin.  I was born and bred in Lagos Island my mum is from Epe.

There was a show that Late Art Alade organized on TV in the year 1957 and the compare was Rosemary Aneze. One Victor Dorgu who worked in Mobil saw me performing with my father’s band and since that day Victor coined “Like Father Like son’

If you compare juju music today to yesteryears what would you say has changed?

Juju music today has gone through a lot of modernization in those days natural juju music was devoid of the modern instruments. The early juju music practitioners used more of local musical instruments like Konga, Sekere, Agidigbo, Tambourine, Maracas, etc Also the type of praise songs then by the practitioners were more indigenous, reflective and had a lot of messages.  If I am singing “Won tun Eko Se Yato si ti atijo” it means I am celebrating the government effort for changing the face of Lagos. If I also sing that “Mo dupe lowo Baba mi pelu iya mi” the song is a tribute to my father and mother.

Many associations were formed years ago to help fight for musicians right, what has become of those platforms today?

We had Nigerian Union of Musicians a body that was put together under General Ibrahim Babangida’s regime. The crisis between different older musicians which led to power tussle made the government of Babangida to withdraw the certificate then the likes of PMAN came on board. NUM was a union that fought for the collective rights of musicians in Nigeria. It is very necessary for the government to talk Chris Ajilo and Victor Olaiya  to release the  document  of NUM so that the union can be revived.

Will you say that the new associations promoting Nigerian music and musicians are not doing enough?

They are all doing their best.

Since Juju music reached   its peak in the 70’s with the likes of Ebenezer Obey and KSA at the front burner it seems nothing has changed in terms of sound and innovation. What do you have to say about this?

The musicians playing juju music today have reached their peak there is nothing more to add to their music. They have added all the modern gadgets there is nothing left to add we just need to go back to the natural Juju music.  The white men are crazy about natural juju music they want to see a small band of juju players with traditional instruments just like the pop group Beatles were also few in number. So we need to still go back to the drawing board.

I am aware that your father Ayinde Bakare introduced some instruments not juju music which year was this and what are the names of these instruments?

Sir from your own general assessment on government support in our core indigenous music, can you say they are doing enough to support our local music?

Government are trying but if we don’t enlighten them enough they may not know how to exploit the opportunities around us. The people working for the government are the ones directing their affairs. If the government comes to us practitioners and we can help give them guideline. Take for instance Myself and Kayode Dosumu and Bisi Lawrence put together one of the popular jingles that is used in radio Lagos then “Radio Lagos Lo gbo de fun ere sise”, I was surprised that someone like me was not invited when the station  they clocked 40 years recently.

Where did Juju Music originate from?

Juju music can be traced to Ilesha roots in the early 20’s. It was popularly known as Ashiko Music. Most of those that brought it to limelight are Ilesha people.  The likes of Ojoge Daniel, I.K dairo, etc. We can just say it was made popular in western Ibadan before it became popular in Lagos.

How was the name Juju coined?

In those days it was fun watching people throw the tambourine to and fro and that act was termed Ju Ju translated as throw throw in English language. The white men always got so excited when they watch people dancing to juju music and they sometime referred to it as masquerade song/dance

How many of your children are into music?

.My children believe musicians of my generation didn’t benefit much from their labor so they really don’t have much interest in music except for my grandson who is the leader of the choir in the church.

Sir musicians generally have many wives how many wives  do you have sir and how have you did you manage distractions from the female fans ?

Women are always fond of musicians but one must just be careful and know what one is doing. I have just two wives but the older one is late.

Are you still actively into juju music?

Yes last Sunday I was a guest at Yoruba Tennis Club Onikan  and they said “Sina your father’s music was core Lagos Sound and we will want you to come and be playing for us”. So we are already making arrangements together on this?

One of the secrets of this craft is the need to be very versed in Yoruba language. You must be deep in our indigenous language to be able to express yourself effectively but more importantly survive the skill of juju music.