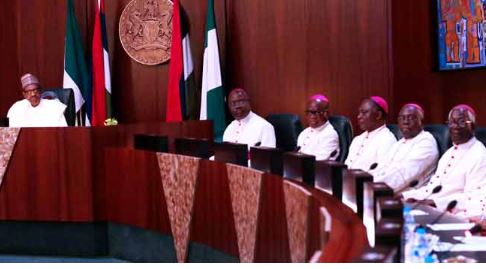 The Supreme Council of Bishops, also known as World Council of Bishops, has warned the President Muhammadu Buhari-led administration against further harassment of Oby Ezekwesili, the chief campaigner of the BringBackOurGirls, BBOG, movement and her partners.

The Bishops also reacted to the current travail of the Senate President, Dr. Bukola Saraki, Speaker of the House of Representatives, Yakubu Dogara and other members of the National Assembly in the hands of the executive.

The clerics noted that Ezekwesili has time without number been harassed by security operatives in the Federal Capital Territory while demanding the release of the schoolgirls abducted by Boko Haram in Chibok, Borno State and the lone Dapchi schoolgirl, Leah Sharibu who has been kept away from her home for months by Boko Haram terrorists for refusing to convert to Islam.

In a statement forwarded to DAILY POST, the Bishops demanded that the girls be immediately released and returned to their families.

The statement was endorsed by the Supreme Council of Bishops; the World Council of Bishops; The Global Advisory Board; the Global Council of Apostolic Nuncio (s); and the Prelate and its Deputies across all 7 continents of the world; the Central Executive Council Globally; all Regional and National Prelates Worldwide, and the General Assembly Worldwide.

The Bishops said, “The persecution of the parents of the Chibok girls, and the Bring Back Our Girls campaign crusaders in the person of Mrs. Oby Ezekwesili, and her partners around the Federal Capital Territory of Nigeria, who times without number had suffered untold and undue embarrassment and open disgrace as they justly fight for the return of the missing Chibok Girls that were captured by the Book Haram insurgents, and Leah Sharibu, as the only Christian Girl and abductee in Dapchi, Nigeria, who was not released because she refused to denounce her Christian faith in the Lord Jesus Christ, as a matter of fact these persecution on the crusaders must stop! We demand their captors to release them forthwith! We demand the Federal Government of Nigeria to swing into action and ensure their release.

“In the same vein, It has come to our notice how, distinguished members of The Nigeria’s National Assembly are being openly ridiculed by law enforcement personnel, and the Nigerian Police Force, thereby making an open mockery of the hollowed and exalted office of a Senator as a member of the Senate, coupled with unceremonious lifting and taking of Nigeria’s Senate Mace , a Symbol of the Legislative Powers of the National Assembly, without bringing to book or justice its offenders, and the like.

“The Members of Nigeria’s National Assembly, the Senators and members of the House of Representatives from these troubled States like Adamawa, Benue, Taraba, Plateau, Nasarawa, Kaduna and the like must, provide avenues of interactions with their constituents with a view to find a lasting solution via provision of communal securities under the watchful care of their Traditional Rulers and Village Heads to, safeguard the lives and properties of her subjects, morally, financially, and administratively.”

The religious leaders called on all the Clergy and Christians, adherents of other religions, and traditional institutions in Nigeria; heads of foreign governments, the Nigerian Civil Societies, the humanitarian agencies and organizations and Workers; the Labour unions and its leaderships, non-governmental organizations, multilateral, and inter-governmental bodies globally, to stand united, and speak out as one voice.

They said the Christian Association of Nigeria, CAN, must remain indivisibly united, the Catholic Secretariat of Nigeria arm that seceded must return, adding that the Church is the foundation and facilitator of positive development in Nigeria and her democracy.

They added that, democracies, human rights, civilization, education, women’s rights, technological advancement, rule of law, are all resultant effects of Judeo-Christian ideology, insisting that if Christianity should cease in Nigeria, all social values and virtues will disappear