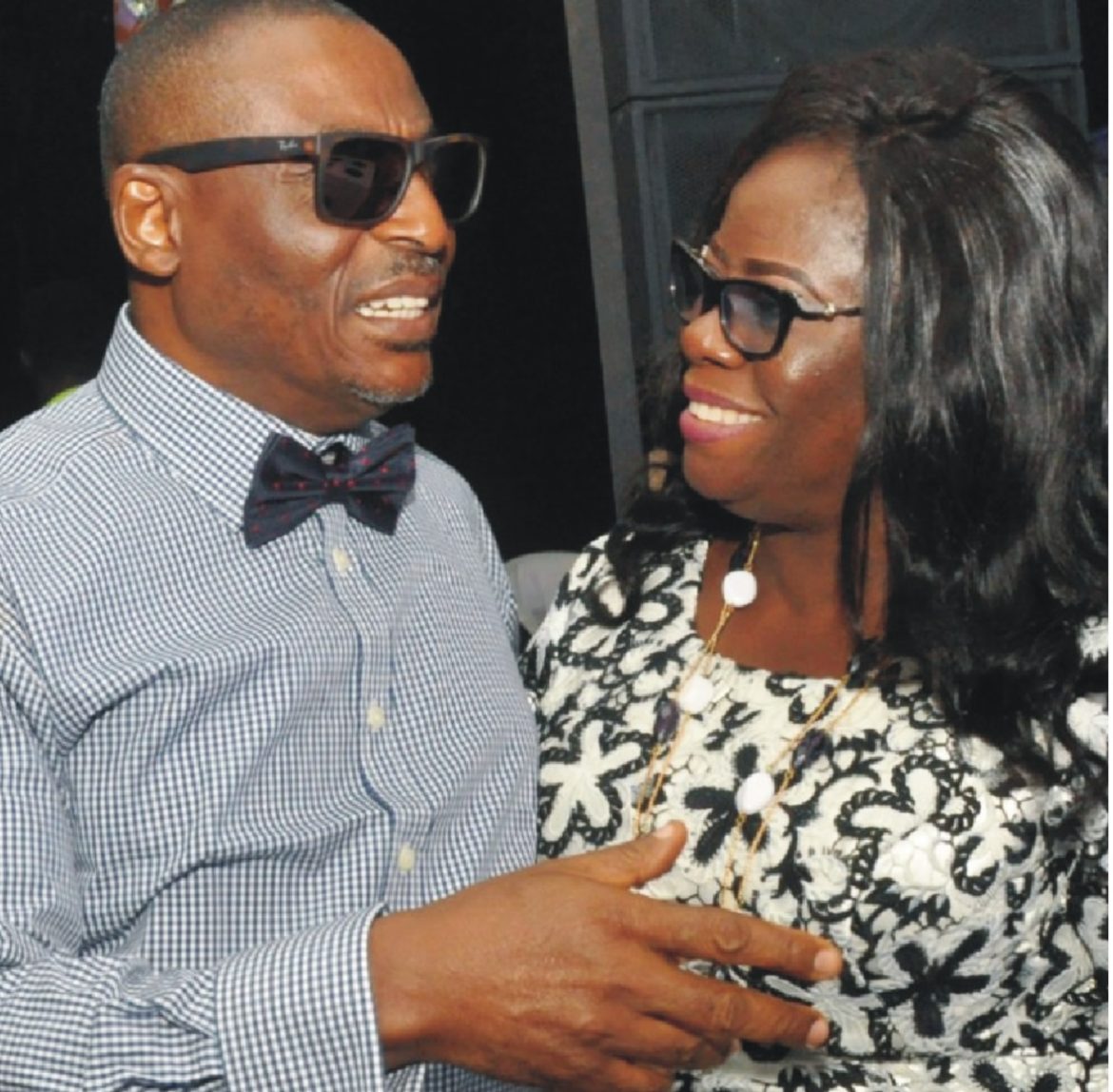 The 5-star Oriental hotel on Victoria Island was thronged by prominent personalities from all walks of Life penultimate Friday, June 22, 2018, as Giwa Bobakeye Otunba Biodun Onanuga, who is also the handsome husband of  the Ogun State Deputy Governor; Mrs. Yetunde Onanuga, played host to friends and well-wishers at a classy 60th birthday dinner. The birthday, which was a black-and-silver affair had City People’s Assistant Society Editor, ABIOLA ORISILE (08052160270), in attendance. Enjoy the exclusive gist of the party.

HOW THE BIRTHDAY BOY GOT WIND OF THE SUPRISED DINNER

Otunba Abiodun Onanuga, Giwa Bobakeye, just wanted a low key 60th  birthday and that was why he decided to play host to family members and friends at his Ijebu-Ode mansion in the morning of his day. The birthday, which kicked off as early as 9am at Ijebu-Ode paraded many business moguls, politicians of note among others. The birthday “boy”, who later went to Oriental Hotel to take a rest after the hustle- bustle of the birthday never knew that a surprised dinner awaited him later in the evening. The ever-active man got winds of the surprise when he saw some known faces at the hotel and that was how he became aware of the venue, which was used. At that point, he couldn`t make some contacts and that was why only a few of his close friends were in attendance. The birthday boy would have loved to have all his friends, and business associates to rally round him as he cut his 60th birthday cake. He spotted white attire, smiled and said: “Oh, you want to surprise me, what a coincidence“.

If it is said Mrs Funmibi Adebayo-Oduwole of Rostal flowers knows her onions when it comes to event decoration. That is a banal expression of her competence. Her touch always leaves a memorable impression on the minds of guests. She was also at her best at Otunba Abiodun Onanuga’s birthday. The bosslady herself was at the venue to see that the decoration matched the order. The theme of the birthday was: “James Bond“. Guests walking into the Hall were amazed at the way the decorator transformed the venue. She judiciously made use of black-and-silver ash. The celebrator was dazed at the way the venue was transformed with his photographs. Not only did the photographs speak of the grace of God in the celebrator’s life at 60, the table arrangement also added glamour to the event. It was a rare silver-ash damask table with a crystal white table cloth decoration. Many of the guests couldn’t take their eyes off the head table and the floor light, which kept shinning while the event lasted.

The celebrator’s life is worthy of emulation. He is one of those, whose lifestyle one couldn’t help, but appreciate. Not only does he has a royal blood flowing in his veins he lives and exudes royalty.  Looking at him from a distance, one couldn’t help but admire his finesse, carriage and charisma. Perhaps, we should tell you amazing things you have never heard about the birthday boy. Do you know Otunba Abiodun Onanuga is a Prince? His parents are from prominent rulling houses in Ijebu-ode. His grandfather, Alhaji Mustafa Onanuga, is from Anikilaya ruling house.

His father was from Jadiara rulling house in Ijebu-ode. His maternal grandmother is from Bobiade royal family in ijebu ode. Alhaja Bisola Onanuga, who was his late mother was a direct descendant of Oba Talabi Awoye, the 20th Ajalorun of Ijebu-Ife, from Olufesogbade ruling house. He also grew up with Oba Sikiru Adetona. Another amazing fact about him is that, he bought his first car in his 20s. He sold the car after Oba Adetona mentored him to build a house instead at age 28. He built his first house in his 20s.

He had the best result in his class in secondary school. He went into construction at age 19 as he built his uncle’s factory (Uncle Fola) in his 20s and the property is still standing till date.  He never worked for anyone. He also started his company, NUGACON, in his 20s. He is one of the closest Otunba to Awujale of Ijebuland.

He also grew up with him in the palace even before Awujale gave birth to his first child, Prince Adedire. He became a polygamist by circumstance and this was revealed by his younger brother, Alhaji Adebola Onanuga.

HIS LEADERSHIP SKILLS STAND OUT

One can’t help but appreciate the leadership style of the birthday boy, Otunba Abiodun Onanuga, the darling husband of Ogun Deputy Governor. Let’s take it from being the Giwa of one of the most popular Ijebu regberegbe, Egbe Bobakeye. Since he emerged the Giwa of Egbe Bobakeye which comprises those born between 1956 -1958. That is the only age group in Ijebuland which has no faction. Despite the fact that the age group comprises many Ijebu rich and mighty, Otunba Anikilaya has been able to play his role as an exemplanary leader. His age group comprises more than 6 Ijebu royal fathers, yet he was able to perform his role as a leader without issue.

AND THE BIRTHDAY BOY LOOKS SIMPLE BUT STYLISH

At few minutes past 7pm, the handsome birthday boy was seen walking from table to table greeting his large number of guests. He was full of smile when he saw his guests who came to felicitate with him. Looking stylish, but simple in a stripe shirt and black pants, matched with a black bow tie, one could take him for a young 40years old man. Though, he would have loved to rock Agbada and cap like an Ijebu high chief, but since he was taken by surprise, he had to rock what was available. Not many know how much he loves to dance until a few minutes past 10pm when he was joined by his two wives on the floor. He made sure his choice of music was played by the Dj.

BETWEEN OGUN DEPUTY GOVERNOR AND HER YOUNGER MATE, MARCELLA

Display of closeness by the Deputy Governor, Mrs Yetunde and Mareulla, her younger mate, could make people take them for siblings. They are mates, but the love between them speaks of how good their husband is at running a polygamous home. They watched out for each other, while the event lasted. Mrs Yetunde Onanuga was seen calling on her mate when their husband was on the dance floor. Pretty Mrs Marcella, though a cross-breed of a Lebanese father and a Nigerian Mother, is a Nigerian, who loves and appreciates Nigerian Values and morals. The wives are so close that it may be hard to know the biological mother of the children. They later joined their husbands in the cutting of cake.

Though Oba Sikiru Adetona couldn’t make the event, but he made sure his first son made the classy dinner. Prince Adedire walked into the hall with his beautiful wife. They were later joined by Oscar Ibru, who is also a top member of Egbe Bobakeye. They spent many hours before they left the event few minutes to mid-night.

Just as a biblical verse says: “Let your children surround your table“, that was the exact way the celebrator was surrounded by his successful children during the cutting of cake. They were led by Yejide Onauga, who is the first child of the celebrator. Yejide is a finance assistant. Other children of the celebrator at the event were: Adebukonla (Event palnner), Adefolahan(Graduate), Olarewanju, Bisoye, Oluwatumininu and  Oladunni.

AND THE CELEBRATOR’S SIBLINGS SHOW LOVE

The resemblance was striking Alhaji Abdul Rasheed Adebola Onanuga looks much like the celebrator. He was one of the early callers at the event as he made sure the event went as planned. So, also were his other siblings, who flew in from across the globe to celebrate the man, who had played the role of father to many. Yemisi Onanuga, Oyinade Onanuga, Afolake Onanuga, and Tosin Onanuga all made the events.

MANY TOP NIGERIANS EULOGISE HIM

One pretty babe, who was visibly present at the classy dinner is 52years old Mrs Mowa Adeniyi, the Ceo of Softwears Limited, in Lekki Phase 1. She runs one of the biggest luxury store patronised by the rich in Lagos. Her brand’s name is popular among the rich and mighty as she handles the wardrobe of many super rich Nigerians. Mowa store sells luxury shoes, babes, designers’ shoes, and perfumes in Lekki. Her husband is Goke Adeniyi, the CEO of Seases Geographical, one of the leading oil and gas companies. She partied hard at the event with her look-alike siter, Funmibi Odunwole Adebayo.