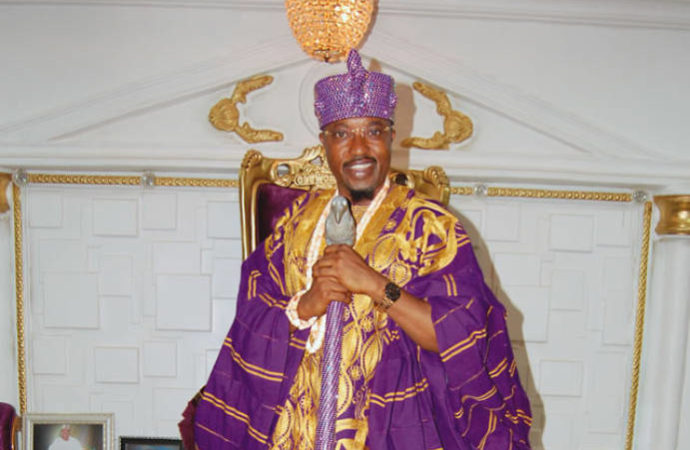 The event which also witnessed the launching of a special publication titled: “Iwo Odidere” saw the members of the state cabinet including the Governor, Ogbeni Rauf Aregbesola, attending as well as a good number of the members of Osun State House of Assembly.  SAHEED OJUBANIRE was there and he brings you gist from the royal birthday celebration.

Because it was the Kabiyesi that was having a party and not just an ordinary party but his golden jubilee, as many as possible of his subjects would want to be part of the event. And apparently having that in mind that mammoth crowd would besiege the main venue, there was a provision for space to host those who would not have access into the main hall due to not having invites or space constraints. Right opposite the main event hall at the other side of the road, tents were hoisted with seats and tables for people to sit and have fun in an open space.

The interior of the main hall was well decorated as the high table was truly very on a high platform in the hall. The table up there was covered in glittering gold cover with the Oluwo’s official seat stationed at the middle of the long table and other chairs for VVIP guests flanked it. And in the lower side of the hall, the tables were alternately covered in either white or purple covers as well as the chairs circling the tables. In all, it was a beautiful atmosphere.

To function as the anchors for the birthday party, the services of the popular faces and voices who were apparently media professionals in the state were engaged. The trio made of up of two men and one woman were Mr. Oyesiku Adelu, Prince Daud Abimbola and Ms. Titi Ajiboye. They spoke in both in English and Yoruba alternately and they really engaged the audience as they cracked decent jokes when necessary.

Amongst those that arrived early, those who were invited to sit at the high table shortly after Oluwo made his regal entry in the company of His Royal Highness, Alhaji Yahaya Abubakar, CFR, the Etsu of Nupe, the Royal Father of the Day, included: Former Oyo State SSG who represented ex President Olusegun Obasanjo as the Father of the Day, Chief Olayiwola Olakojo, Chief (Mrs.) Folasade Tinubu-Ojo, the Iyaloja General of Nigeria, who the Mother of the Day, Dr. (Chief) Oluremi Ademola Atanda, JP FNAE OFR, the Eketa of Iwoland and President of Iwo Board of Trustee (IBOT), Bar. Adebayo Shittu, the Minister of Communications, Senator Florence Ita-Giwa, another Mother of the Day, Chief (Mrs.) Abbah Folawiyo, the Mother of Honour as well as their  close friend Mrs. Onilere, and the Kabiyesi’s Olori, Queen Chanel Chin, were all seated at the high table at the start of the event.

A SPECIAL PUBLICATION WAS LAUNCHED IN HONOUR OF OLUWO

As soon as the opening prayers were over and some other important guests that came in during the period of the prayers promptly recognized by the anchors, the event moved into launching of a magazine- like publication titled: “Iwo Odidere” in honour of the birthday king. The publication which had a bold picture of Oluwo donning its cover was first unveiled and launched by Iyaloja General, Senator Ita-Giwa and Mrs. Folawiyo before others were called to launch the publication as well. Some of other dignitaries who launched the publication generously include: Bar. Adebayo Shittu, Dr. Malami Sheu, Chief Femi Babalola, Alhaji Tunde Rahman who represented Asiwaju Bola Ahmed Tinubu, and a man who represented Oba Akinruntan, to mention a few.

Immediately the launching was over, Kabiyesi left the high table and greeted his guests across the hall as he thanked them for coming before going back to the front of his beautiful birthday cake that was regal in its design with a crown atop the golden pastry product. The cutting of the cake was supervised by Senator Ita-Giwa who counted from ten to fifty in tens before the knife was levered down the cake by Kabiyesi.

When the event was already at a very advanced stage, the Governor of the state, Ogbeni Rauf Aregbesola, made his grand entry into the hall to honour Oluwo. And the governor took pictures with Kabiyesi at the cake stand before making a brief remark and congratulated Kabiyesi on his golden jubilee.

GUESTS HAD A LOT TO EAT AND DRINK

While activities of the event were going on, guests were already been entertained with food and drinks after they had been served popcorn and ice cream by Christoy as appetizer. Destiny Caterings and Kemidele Caterings later served choice foods as some resource people served water and drinks alongside.