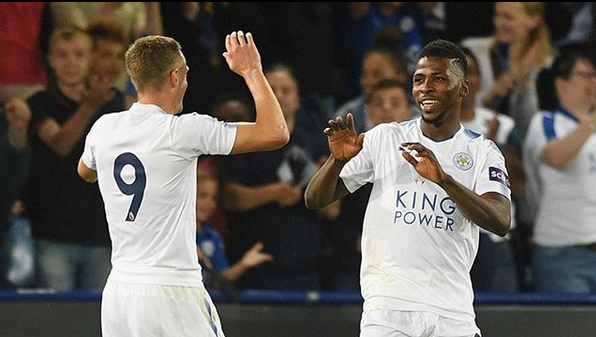 Nigerians in England have exported the country’s variant of English as Leicester City striker Jamie Vardy says he’s learning how to speak Pidgin as fluently as the Super Eagles players in his team.
Ahmed Musa, Wilfred Ndidi, and new entrant, Kelechi Iheanacho, are the Super Eagles players in Leicester City.
Vardy told a Nigerian news platform that his only challenge with the Nigerian trio is their Pidgin English which he says is difficult to understand.
“The Nigerian players keep talking- Pidgin English you call it, right? It’s hard to understand,” Vardy,” he said..
“But I am trying to learn it and speak it like they do.
“They are great players. And as the team is trying to improve, that is why they are brought to the club – to help us improve.
“So, it is left to them to work hard and get on the playing field.
Vardy, who was instrumental in Leicester’s emergence as England’s champions two seasons ago, said breaking Ruud van Nistelrooy’s record of most consecutive goals in the EPL was an emotional experience.
“That was the best achievement of my career as a footballer,” he said.
“At that moment when I realised that I broke Van Nistelrooy’s record, I didn’t know what to do or how to deal with that but I was happy. I was emotional.”
Vardy further said it was too early to predict the winner of the new Premier League season.
“Who knows? This is football. Any club can win it. Or we can too,” he added.

SEE ALSO: UNBELIEVABLE! DROGBA BACK AT CHELSEA, INSPIRES MORATA, OTHERS