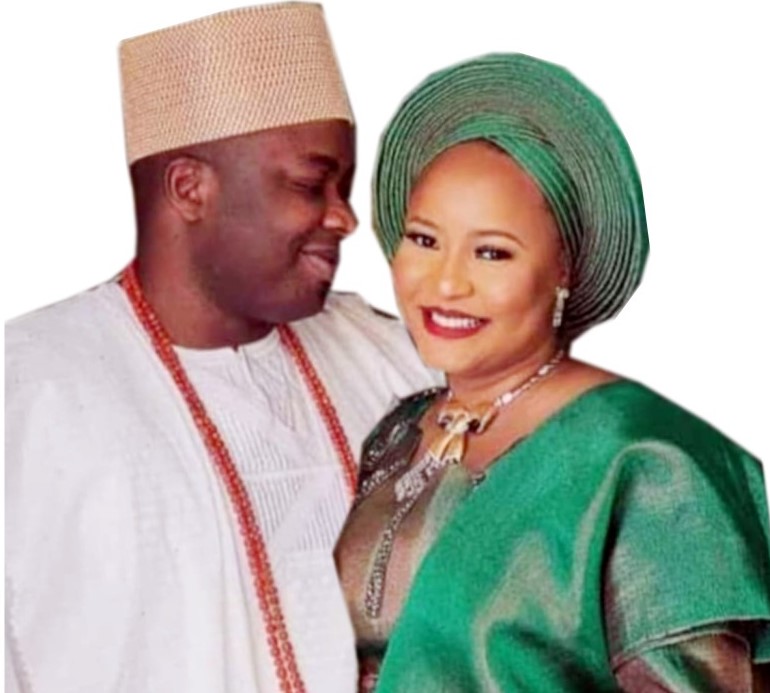 •Why Oba SAHEED ELEGUSHI Waited For 5 Mths To Marry Her

It is no longer news that one of Lagos rich and stylish kings, Oba Ademola Saheed Elegushi, has got a new wife and she is Olori Hadiza Yakassai. But what many don’t know is who she is and what makes her exceptional. What stands her out? Who are her parents? What’s her private world like? How did she meet Kabiyesi 3years ago? Why did it take Kabiyesi over 5months to marry her?

Perhaps, we should tell you what you haven’t read about Hajia Hadiza Tanko Yakassai. She is the silver Spoon daughter of a Kano, 92years old northern politician of note. Ask around the Emirate city of Kano who Alhaji Tanko Yakkasais is and you will be told that he is an elder statesman whose name can open many doors. He is a human rights activist of note and a successful businessman, who has a finger in every pie. He was a public officer and was among the first set of commissioners in Kano state during the era of the first Military Governor of Kano State, Audu Bako, and since then, he has left his footprints on the sands of time especially on political issues.

Though Olori Hadiza Tanko Yakkasai’s father is ageing old, but he is agile and he looks many years younger than his age. Olori Hadiza Elegushi shares a strong bond with all her siblings despite coming from a polygamous home. It may even be so difficult for you to know that she and some of her siblings are not from the same mother because of the way they brought them up.

This was revealed by her elder brother, Salihu Tanko Yakkasai, in an exclusive interview, he granted “Punch Newspaper. He explained thus“ She grew up with her 19 siblings all under one roof. “I vividly recall that my father’s worst moment was when he lost his mother in 1990 or thereabout, which almost coincided with the loss of one of my sisters, Maryam. Another brother of mine, Ibrahim, died a few years after that. His good moments are usually when anyone of us records achievements in life. He usually expresses gratitude to God Almighty. All of us are happily married, with children and are working or managing our personal businesses. There are 19 of us alive till date. Unlike traditional polygamous African families, we are one big happy family. He is proud of this,“ he revealed

This accounts for his excitement about the news of his sister, Olori Hadiza, getting married a few weeks ago. Salihu Tanko Yakkai just like his father shares a very strong bond with family. He has been married to Hajia Zaynab Yakkaisai for 13 years and still counting.

How then did Hadiza meet Oba Saheed Ademola Elegushi? Why did she settle for a South-West man? City People’s investigation revealed that they met in Lagos over 3 years ago. It was said that beauty which she combines with brain made King Gushi fall for her. Just like all the other Yakkasais, Hadiza is also said to be so brainy right from childhood. just like her twin sister, Fatima.

Kabiyesi kept the relationship under wrap while they dated and later decided to take it a step further in December. The decision didn’t go down well with the first Olori Sekinat who believed that her husband wouldn’t take a  second wife. Of course, it was learnt he never wanted to, but he was so entangled in the love webs of Olori Hadiza Yakkasai and could not ignore her. No man would want to leave a young, innocent looking and brainy lady like Olori Hadiza. At a point, there was a more to let Olori Sekinat.

Some believed that it was His Imperial Majesty, Oba Enitan Ogunwusi who spoke to Olori Sekinat Aramide on the issue, City  People scooped that this was far from the truth. It was also alleged that it was a group of Lagos high chiefs that Oba Ademola called to pacify his wife in December. There was no iota of truth in this either.

Who then told Olori Aramide the news of the 2nd wife? City People’s source revealed that the King did not allow a third party in his marriage. He believed that he shares a strong bond with his wife which can never be broken. This informed his decision to tell his Mum, Olori Sinatu Elegushi, who then called a meeting and told Olori Aramide whom she regards a daughter than a wife.

Of course, just like every other woman, Olori Sekinat didn’t find it funny and Kabiyesi pacified her and she approved of the wedding after 5 months. It was further revealed that the wedding would have taken place sometime in December last year, but Kabiyesi had to shift it not only to accommodate his first wedding anniversary but to show love and respect to his senior Olori.

Dont forget that Olori Sinat Elegushi, the mother of incumbent Elegushi, once revealed to this magazine that there was no ploygamy in the palace. She said: “It is the youth of these days who made polygamy look bad. My husband, the late Oba Yekini Elegushi married me and I had seniors in the palace. I also have junior ones too. I respected them alot and I shared a very strong bond with all my senior Oloris and those who came after me. We lived in the palace as one in peace and love”, she revealed.

The Story Of Olori HADIZA ELEGUSHI Unveiled! was last modified: May 15th, 2019 by Abiola Orisile

How I Coped During The 2 Months...