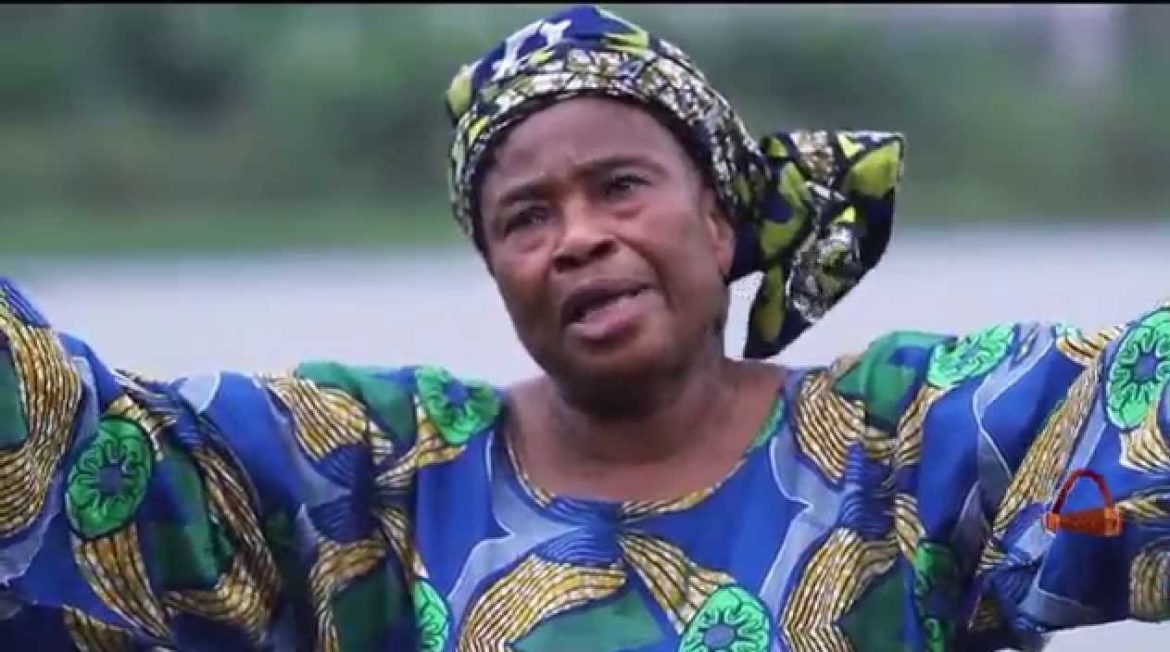 Alhaja Motunrayo Adeoye died last week. Until she died she was a well-known person in the Yoruba movie industry. She was among the 10 most featured veteran Yoruba actresses in the industry. She is a niece to Oba Lamidi Adeyemi, the Alaafin of Oyo. Before now, not many are aware that Motunrayo is  educated, having graduated from Osogbo Technical College, Osun State where she studied Electronics before she later jetted out to Switzerland for a 7-month course to acquire more knowledge about the profession. In the 70’s, she joined the BCOS, Ibadan as a studio/audio engineer, a job she did for almost 40 years before her retirement in 2010.

Almost immediately after her retirement, she went fully into acting. Her enormous role in Kunle Afod’s hit movie, Igbekun made Mama a force to reckon with among her counterparts. Recently, City People published her interview in which she shared with us the story of her life and how her role in Igbekun shot her to limelight among other issues. Below are excerpts of the interview.

We’ve not been hearing much about you lately, what is the problem?

There  has been nothing much or special happening lately. If I am invited to a movie location, I still go. A weekly TV series that showcased me more has been stopped because the TV running it stopped paying the producer. And don’t forget that going to movie locations isn’t an every day affair, it is the released ones that you will be fortunate to see. So, I have been working endlessly in the recent time, just that they are yet to be released. I just completed shooting before coming here today.

After you starred in Kunle Afod’s movie, “Igbekun” nothing much has been heard from your end, why?

After Igbekun, I have done a lot of movies. I did one with Ogogo and others, they are just coming out one after the other.

There was a time you were ill, what was the sickness all about?

Yes. you are right. It was ulcer and it all started when I was still in service at BCOS, Ibadan. Sometimes, when I was working, I may not eat till late at night and I had no idea that this was very dangerous to my health. In the process, I developed ulcer, but thank God for His mercy on me, I have got over it.

You suffered this ailment for how many years?

That should be like 8years ago. It started before my retirement and I got over it last year.

Which service were you rendering to BCOS?

I joined BCOS in 1975 after my education at Technical College, Osogbo in Osun State. I studied electronics. I had an interview with several TV stations before I was employed at BCOS and I retired in 2010. What I am trying to say is that, I was on shift duty for years because I was the head of audio department and dealt with sounds. When I resumed work at 4am, I will close by 12noon and I will not eat until that closing hour. I didn’t  feel it because I was young then and that youthful blood was still flowing in my system. I was later told that my breakfast is essential missing it often led to the ulcer.

How did you now get into acting?

I started acting when I was in the service; I used to do it during my leave or on weekends. I didn’t allow my acting career to affect my daily activities at work. I have been acting since I was in primary 5 because I loved it so much. So, I can’t really say someone brought me into it. I loved it and I went into it. In fact, I worked mostly for Mainframe and I featured  in Aloyaagba, Agogo Ewo and others. If I should attribute that to someone, I will say our former ANTP governor in Oyo State known as Alaafin brought me in.

Can you tell us more about your educational background?

I attended Ansarudeen Primary School at Agunpopo, Oyo Town, from there to Anglican Secondary School in the same town before I proceeded to Trade Center, Osogbo to study Electronics. Thereafter, I went to Switzerland to further my studies. I spent about 7 months in the country to achieve that in 1979 and we returned in 1980. We went for a course to study how to maintain and use the studio equipment such as console and others.

As a female studio engineer, don’t you feel intimidated among men?

I have to tell you that out of 19 of us who went for the training in Switzerland, I was the only woman and I really enjoyed it. I didn’t see any intimidation because I believe that what a man can do a woman can also do better. Nobody disturbed me in anyway.

I was born into the family of Alaafin of Oyo, Oba Lamidi Adeyemi, Iku Baba Yeye, {Kabiesi ooo…}.  He is my uncle and he plays his role in my life as a father. Take a look at my tribal mark; you will see that we both spot the same pattern. I grew up in Oyo, but by the time that I was in school, I had to leave the town especially when I finished at the technical college, I came to Lagos and I spent 7 years before I returned to Ibadan where I got a job.

How are you related to Alaafin?

He is my father’s kid brother. My father died many years ago. He was a prince and he could as well be in the position if he was to be alive.

What would you say Alaafin’s position as a top class king in Yorubaland has done to you as a person?

The question is somehow big for me. He is my father; it is only if I didn’t ask him for anything, he grants whatever I request. When his brother, who was my father was alive, on many occasions if I asked him for anything, he would direct me to Alaafin and Alaafin would not hesitate to grant my request. I pray for long life for Alaafin. He was already on the throne before my dad kicked the bucket. I am always happy that I hail from a royal family because it is a big deal to come from Alaafin’s family. When I was abroad, the whites would be staring at me because I am aware that they believed that lion gives tribal marks to people in Africa. Someone alerted me that when they stare at me, I should reciprocate and  they would stop, which I did. I always laugh when they stare at me because I was much younger and the marks were more conspicuous. I really enjoyed my life as a princess.

What was your saddest moment in your career?

I always pray that God should not make us sad, he should  continuously be making us happy. My saddest moment in acting was when I retired from BCOS, I invested my entitlements in a movie and the job is yet to be out even till date. That was the only sad thing I ever experienced in the field.

Why didn’t you release it?

I wouldn’t want us to go into that because it is an issue of a marketer. I don’t want to talk about it.

Are your kids also into acting?

Not at all! None of them is into acting. They didn’t go against it when I started, but none of them picked interest in acting. I never stopped any of them from doing it because I love it and it runs in my blood, but that doesn’t mean that my children would also toe the same line.

How can you describe your challenges in the movie Igbekun?

People are still talking about the film. I am also surprised about the character, but I thank God because the movie was shot in Offa and Kunle Afod deliberately looked for me to play the role. I have no idea  how I entered the character, but God has a better understanding of it. It is as if I have never featured in a movie before, many are just talking about the role I played in the film. If this person sees me, he would say Mama Igbekun, other people would say the same thing but really, I give glory to God.

Which film would you say shot you to stardom?

What advice would you like to give the young, upcoming ones in the industry?

I will advise whosoever wishes to be an actor to be patient and remain focused. It is not possible for you to come today and become a star the following day. You will just be useless. Be patient and endeavour to have a good role model in the industry. Don’t run faster than your shadow.