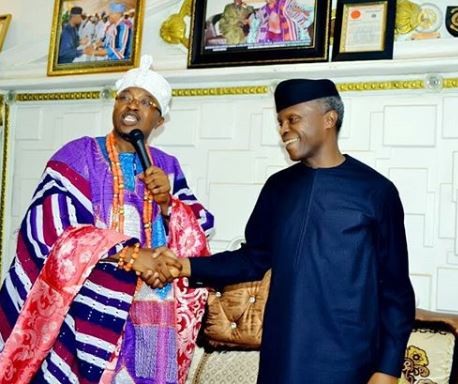 The Oluwo of Iwoland, His Imperial Majesty Emperor Telu 1 has just bestowed a chieftaincy title of the vice president of Nigeria, Prof. Yemi Osinbajo.

The title ‘Olori Ogun’ of Yorubaland was presented to the VP at the monarch’s palace on Osun State.

Making the announcement, Emperor Telu said, ‘It was a glorious day in the history of Iwoland as I recieved the Vice President of The Federal Republic of Nigeria Olorogun Yemi Osinbajo in my Palace and I bestowed on him The Olori Ogun (Olorogun) of Yorubaland’.

He went on to say, ‘Olorogun Yemi Osinbajo is now one of my subjects with a chieftancy title from Emperor Telu1 Alashe Lori Orisha Arole Olodumare’.