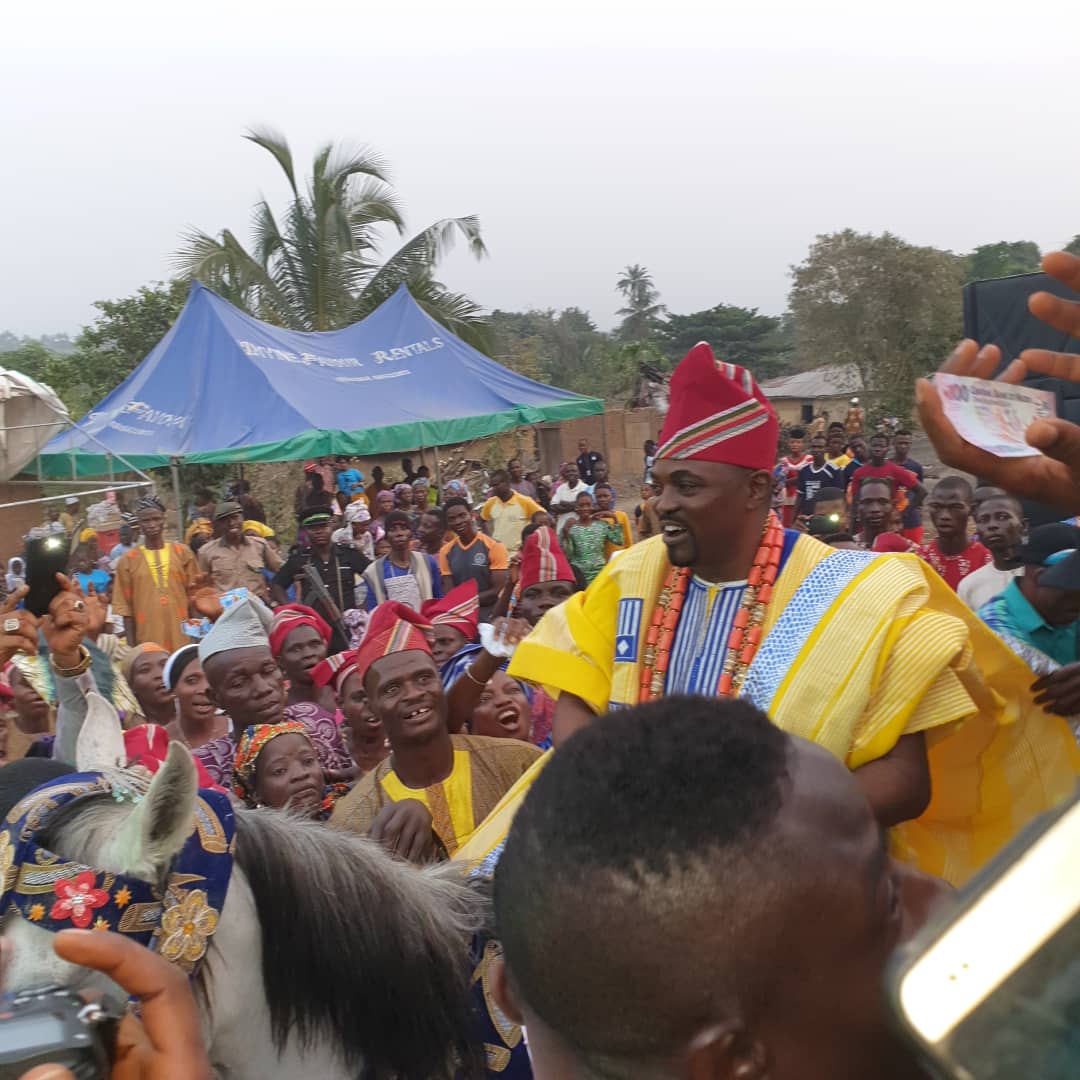 Ambassador Adetokunbo Okikiola Gbadegesin Tejuosho, an urbane personality is the Baase of Orile Kemta, Ogun State. In Orile Kemta, Baase literally means the community head. This United Nations (UN) on Rural Development and Drug Abuse is very passionate about bringing fast-tracked development to his rustic community. And he would not leave any stone unturned to achieve his objective.

On Friday, December 28th, 2018, Baase kick-started an annual celebration in the community tagged: Orile Kemta Day. The festival, according to him, would attract the attention of the people near and far to the rural area’s great agricultural potential

And as part of the activities for the maiden edition of the celebration, there was a novelty football match between Orile Kemta F.C. and Future Talent Football Academy. The icing on the cake of the match was the goal scored by a young boy of 14, playing for Orile Kemta F.C.  Ondah Friday who win a scholarship after the match.

Baase, in his quest to set the stage for development of his community, had already single-handed funded the grading of 4.6 kilometre road before the D-day of the celebration for easy movement of people.

There was a big celebration in the town on the day which was attended by sons and daughters of Orile Kemeta from far and near home and abroad Fuji start, Taye Currency, entertained guests. Dignitaries who graced the occassion included Olu of Itori, Oba Fatai Akamo, Oniro of Iro, Oba Najimu Nikko and Olowode of Owode were in attendance as Baase’s quests.

In this interview with the Baase, he shed more light on the historical background of Kemta Orile, its agricultural potential and why they now celebrate Kemta Orile Day. Please read on:

Can you tell us the origin of (Orile) Kemta where you are the Baase?

Well, my ancestors migrated from Ile-Ife in 1822. They came through Ijebu, and that is why you hear in our oriki (panegyric) that: “Ijebu, omo Adunrunmade, omo Adunrunmosu P’Ediye je. Omo Aladiye Ogogo ma niga t’oni toun ba rajo, toun ba t’ajo de, ohun amu aya ohun loj’oba ni Remo. Omo Akaka ni Remo…”. That is why you hear that in our oriki. So, they migrated all the way from Ijebu and they passed through Ibadan before they got down here. And they settled here in 1822. Even as at then, I’m not sure we’ve had the Egba in existence. Or rather, may be Egba had been existing then, but Orile Kemta had been here as far back as 1822. And my forefathers had a special appellation of “Ogbori Ogedengbe, Adabonyin”. The Adabonyin was a warrior and also a hunter. So, he was coming one day and was seized somewhere on his way to the camp. There was a place they called camp. So, he was taken to Ibadan. When he got to Ibadan, several times he was brought out because the Ijeshas were always at war with the Ibadans then and when the Ibadans consulted the oracle, they were told to use a male and a female for sacrifice to ward off the warring communities against them.

But when they now brought out Adabonyin his sacrifice and as the executioner raised his sword to severe the head of Adabonyin his hand stood stiff in the air.  And when another   male was brought out to replace Adabonyin, the executioner cut off his head for the sacrifice. However, despite the human sacrifice, the Ijesha were still at war with Ibadan. So, they consulted the oracle again and the oracle revealed to them that there was stranger in their midst who could help them. And that was a  when they knew it was Adabonyin and they went to ask him what they could do to conquer the Ijesha. Adabonyin told them that every instruments of war they seized from him should be brought forth and when that was done, Adabonyin then asked them the time their enemies usually come around and when they told him, he said they would go and bombard them at their end before the next time they would strike. That was how Adabonyin led the Ibadan warriors to battle against the Ijesha. When they got to the boundary of the Ijesha ’s territory Adabonyin and his army stopped there as news already got to the Ijesha that the Ibadan warriors were already nearby. The Ijesha  expressed  surprise the people the usually conquer at home brought the war to the what gave. them the effrontery? And they came  out in anger to fight out for war too anger. And as they were approaching where Adabonyin and his Ibadan army stood in waiting, Adabonyin fire a shot towards them and like a hundred bullets came out hitting many of the enemies at once and everyone was shocked. As they regrouped, he kept decimating them with every gunshot and that was how he earned the name Adabonyin (the one who can kill multitude with one shot). To cut a long story short, Adabonyin came back to Ibadan with the head of the warlord of the Ijesha known as Ogedengbe. And as a reward, he was ceremoniously followed on a horse back to this location from Ibadan in freedom. And that is also why you would always find horses in our surrounding as tribute to his triumph back then. Because the horse is the symbol of Adabonyin. Though, he had a symbol’s of weaponry too, but civilisation has phased out those ones as time unfolded. After all, there are no more internecine wars. Instead of that, we are all finding ways to develop our communities. Then, Adabonyin would fight, but now we are drilling boreholes. Then, Adabonyin would fight, but now we are constructing roads. Then, Adabonyin would fight, but now we are building multipurpose hall, and that is it over there. Then Adabonyin, would fight, but now we are building schools for our kids. If you walk down there, there is an acre of land with which we want to build a modern hospital. And again, there is a town in Egbaland called Kemta and Kemta is one of the five divisions where the crowners of the Alake of Egbaland always emanate from. Without the representative of Kemta, Alake cannot be crowned. And the Kemta we are talking about has its source here.

With the rich historical background of Kemta, are there efforts to popularize its legend?

Well, efforts are already on ground to synergise the Kemta and make a replica of it in Miami, United States of America, and also Florida. The discussions are ongoing already and it would materialise very soon. It is going to be a total replication because whatever you see at Kemta here is what you would find in Miami, We are already seeking approval and we are making headway with that. We will build mud houses in Miami which are going to be like what we have in Kemta for tourist attractions out there. Those are some of the things we are working on now. May God help us to see it through.

When did you ascend he throne of Baaleship ?

Well, I am an ambassador to the United Nations on Rural Development and Drug Abuse. And it was from the work I do that I remembered my origin that I should be able to extend the gains of what I do with the United Nations to where I came from. And unknown to me as well, there had been some awareness back home here that a son of the soil doing so somewhere should be sought for and make him come back home. So, it was a two-way feeling from both ends which I believe was what ignited the decision in come back to where I was born and do something for them. So, in Novemeber, 2017, I became the Baase of Kemta. The entire Kemta.

Tell us the meaning of Baase?

How do you think federal or state government could assist in developing a rural area like Orile Kemta here?

There are many ways that they could assist us. For instance, we have just graded a 4.6 kilometre of road, which used to be thick forest. We brought tractors and bulldozed it and graded it. What government could do for us is to dig drains tar it to make the road durable.. Come to think of it, the journey from Odeda to this place is not supposed to be more than 20 minutes but it takes about 1hr 20 minutes, owing to bad road. Let me tell you this, the best garri comes from Kemta. You can do your independent findings about that. If you go to Olodo market or Killer market, or even Olugbo market, which are all very close to us, if you want to buy garri, Kemta’s garri remains the best in all the markets. There are cocoa plantation, but there is no road. If the roads were good, you can imagine what that would fetch us. Our cocoa is one of the best as well. So, the government should look in the direction of the rural areas to see where they could assist us.

Adabonyin Day Celebration, what exactly do you intend to achieve through it?

This is the maiden edition of Adabonyin Day and our aim and objective is just to showcase our town and let people know Orile (the source of a major community). And to let the people know that we have a lot of things here. Okay, despite the fact that this is our maiden edition, we have guests close to a thousand. So, by the time we do it 2,3,4,5 times, you can imagine what it would be like. At Orile Kemta would have 17 villages under us. We have Apata, we have Adegbo, we have Aderu, we have Apena, we have Oluga and many other villages: Akogun, Eruwon and the others The thing is, without development, even 200 villages would count for nothing. So, what we want to achieve is that we want the outside world to know what we are here. We want them to know that there are farmers here. If you see the quality of yams we have harvested just today  for breakfast, you’ll marvel. Even, I was so amazed when I saw the tubers. All the food stuffs we are using for this celebration are all from here. Garri, Yam Flour, Yam for pounded yam, all came from here. So, what we want to achieve is that we want to showcase ourselves. We want everyone to know that there is somewhere called Orile Kemta. So, that people can come to patronize our farm produce and all that.