Home News Why I Closed Down Niteshift Coliseum After 27 Yrs,
News 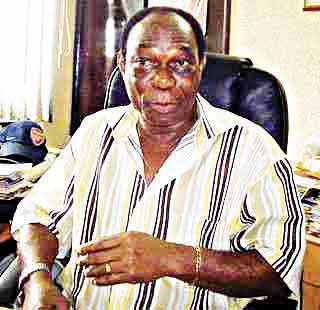 Ken Calebs Olumese, the G’uvnor of the popular night club called Niteshift Coliseum has been off the showbiz scene for a few years now. He has also been off the pages of Newspapers and celebrity magazines. And he has kept a low profile, choosing to live in life below the radar.

At 73, Ken Calebs Olumese has tried. He has paid his dues for close to 30 years, he dominated the entertainment sector as a colossus.

And his club was the in thing then, until he decided to pack it up. He has since turned the complex in to an events venue, whilst G’uvnor has gone on to do other things. Since he quit active nite clubbing business, he has created more time for his kids and grand children, who constantly drop bye to spend quality time with him in his new sprawling Ajah mansion.

Expectedly, many things have changed about the man, who for many years was the god father of Entertainment in Nigeria. He no longer drinks. He no longer smokes and he has completely, shaved off his hair. Gone is his only hair. But he has retained that his pencil-slim stature. He is now fully retired. And he is busy with his memoirs, which he says will soon be ready. In the book, G’uvnor plans to document the story of his life and the vicissitude  that characterised his last 30 years, especially how his house and club got burnt at various times and how he put all that behind him. He spoke with City People’s Publisher, SEYE KEHINDE, last week. Below are excerpts.

It was your birthday a few weeks back. You turned 73, but you didn’t mark it. Why is that so?

I have never marked my birthday. Coincidentally, when I was still running the club I used to celebrate children in on Children Day, 27th May, which happens to be my birthday. So, when I ran the club for over 20 years, I was celebrating children from all walks of life. But I don’t celebrate mine. I have never taken my own personal birthday as anything special. The last one was a surprise birthday. It was organised by some of my friends and kids and they bundled me to Eko Hotel for dinner. I don’t normally celebrate my birthdays.

There is no reason. I don’t regard such thing. I only celebrate children on the  children day. Its just a coincidence that my birthday falls on that day.

No, I didn’t but when I was 70, my children gave me a surprise treat. To me, birthday is not a special event that you celebrate.

What went through your mind the morning of Sat. May 27th, 2017, when you woke up? Any reflections?

Nothing. No reflections. I have been reflecting all my life. There was no reflection. I woke up normally. And when my kids called and asked where I was I told them I was in the house and that I was not going anywhere, until they came and  cajoled me to go out with them and I saw that they had arranged something for me. Even my parents know, even my children know that I don’t celebrate birthdays. There are a few things I don’t attach importance to. I don’t wear more than one ring. I don’t wear chains, or  ride in many cars. I am not a car freak. I drive only one car at a time. I have never had 2 cars at a time. I drive only one car. That is just my style. I never sit at the back seat. I am always sitted in the front seat of a car. That is my life. I only sit at back sometimes, when I am going out with my wife. She would grumble if I decide to sit in front, so, I always sit with her at the back.

You have been off the showbiz scene for the past 4 years. How has life been? What has been happening to the governor?

Life has been good. I have moved on to another phase of my life. I am facing other challenges now. One of my new phases now is life after the klieglights. I have had enough publicity. I am facing life outside entertainment. It is a different life entirely and I am quite happy with my new life. I am at home all the time now. My children and grandchildren come around all the time. I am a grand dad. My friends come in and we talk and gist. I am not under any pressure to go to work at any point in time. I am retired. I am quite okay. I still go out once in a while.

How easy was it going into retirement at the time you did about 4 years ago? Many people believed that government would continue and continue, till infinity?

Noo. I never took any decision to retire. I just felt I had no new challenges again. I have done all you could do in the industry. I had made the statements I wanted to make with entertainment. I spent 27 years of my life in Entertainment. And I have done what I wanted to do. It is a passion that I have. I was just fed up. Just as I entered into it, I left it.

At the time you went into Entertainment many people were also surprised why a young, dashing corporate executive would leave a good paying job with a multinational company to float a night club. Why were you so daring at that time?

I prepared myself to be an entertainer  when I was young. All that time, I was an Executive Director of a multinational. I was holding very big parties on Allen Avenue, preparing how to manage crowd. I made many  friends. It was during my stint as a corporate man that I met the likes of Mr. Biodun Shobanjo, Dele Giwa, Ray Ekpu, Dr. Yemi Ogunbiyi. These were the people who formed the core membership of Niteshift then.

So, it was something I had always wanted to do then. Before I set up the club I was a Life member of so many international clubs.

What was the motivating factor that made you decide to set up your night club?

One, I like Entertainment. Anywhere I go to abroad I usually experience their entertainment life. When I was working as a corporate man, I had the opportunity of travelling round the whole world. There is no continent that I have not been to. Any place I went to, the first place I always ask a taxi-cab driver is: which is the best club. So, I have always liked entertainment. What struck me then was if you go to clubs abroad, you will see some prominent people who won’t go to clubs here, go to clubs abroad, it is different. So, I said ok, something is making them go  to club abroad. Why don’t they attend the ones here. I said to myself then, may be they had not found a club that mets their  expectations. So, I had a target audience and my target audience was a very big one. Nite Shift was not meant to be a club for everybody. It was for a talented few and I had that audience for 25 years. The audience was the very responsible, not only middle class but the audience that would normally not go to clubs. You don’t expect a governor, by Nigerian standards, to go to clubs. But, I had governors as members of my club. Such as ex-Gov. Gbenga Daniel, he was a member of my club and he was not even into politics then. He was a young engineer, and has a Gold card member. Ex-Gov. Uzor Kalu was a member. So many of them. Even you. You were in the glamour side, I chose my audience.

Then, my idea of running a club  was not based on the need for money or doing it because of money. Noo. To run the club, the type I ran, you should not expect big money. My drinks, menu were very moderate. The type of people I have were not the type of people who would come and show off that they have money. People who really have money and people who are reckoned with in society don’t really come out to show it. I carefully chose my  audience and I never wanted money to be a consideration. That was why  membership was never bought. I would look at you and if I think you are deserving of it, I would give you a membership card. No amount of money is paid for membership. It was a close-knit family. Even though the club is not there anymore, the membership is still there.

You were also known to offer a personalized service. You were always at the door to usher in guests into the club. Why this model?

That was the concept of the club. That was what made the club unique. That was why when you asked me why did I retire, I told you, I had to retire when time was up. Some people kept asking me till today, why did you retire? Why not give it to your son or brother, I said look. It is a different kind of business. This is personalised. If my son wants to set up a club he can. The concept I had when I set it up is quite different. The way I relate to you is not how my son would relate to you. The way I  serve you is not how my son would serve you. And since that my clientele is not there now, I don’t need to go on again with the club.

What did running a night club for 27 years non-stop take away from you?

Why I Closed Down Niteshift Coliseum After 27 Yrs, was last modified: July 3rd, 2017 by Reporter