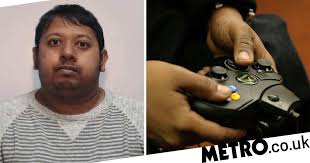 A gamer man who lured a 5-year-old boy using Playstation and Xbox in order to sexually abuse him has been jailed for 21 years.

33-year-old Anwar Ali of Chapel Street was found guilty of five counts of rape of a child aged under 12, four counts of sexual assault by penetration of a child under the age of 12 and two counts of accessing indecent images of children at Manchester Crown Court. He was also ordered to remain on the sex offenders register for life.

Ali abused his victim over the course of four years from 2003 to 2007. He would invite the boy to play computer games with him on his Xbox and PlayStation in his bedroom and then sexually abuse him before raping him.

The victim went to police in June 2017 after experiences with sleepless nights and suffering with OCD which causes him to scrub his skin so hard when washing it would be ‘red raw,’ according to Mail Online.

When Officers from GMP’s Child Protection Unit seized a computer registered to him, they discovered it had been used to view indecent images of children, leading to his arrest.

The court also heard that Ali, who is now impotent, was 18 when he met the victim after he moved into his neighbourhood.

David Bentley prosecuting said: ‘The defendant’s bedroom had a Playstation and Xbox and the complainant would be invited into the bedroom with the defendant to play video games. But during 2003, when the complainant was only five years old, he approached him from behind and kissing him. It then progressed further over the next four years.’

Sentencing Judge Tina Landale told Ali: ‘This was a campaign of sexual abuse which took place in your bedroom. You enticed him into your bedroom with the promise of playing video games and I described it as a campaign because that there were more than 100 incidents. He says it was sometime more than once a week.

‘You kept your family in the dark with your sexual interest in young boys and you continued to rape and sexually abuse him. The impact of your abuse on him has had long lasting consequences. He says that you have stolen his childhood and he doesn’t like it when people touch him.

‘As soon as he was an adult, he was unable to sleep because of the abuse he received, and he told the authorities. You expressed grooming behaviour because you enticed him into your bedroom with video games. On occasion his mother was stood on the other side of the door asking him if everything was alright, unaware you were abusing him.

‘You now walk with a stick and I am told you have erectile dysfunction – but that doesn’t stop you from being sexually titillated from child pornography online. You were still being aroused by looking at children being abused online.

‘You are still sexually interested in children and I know this because you were arrested in March 2017 for having indecent images of children.’

Murder of George H. W. Bush’s Doctor Is Still at Large, He ‘Has a Hit-List’