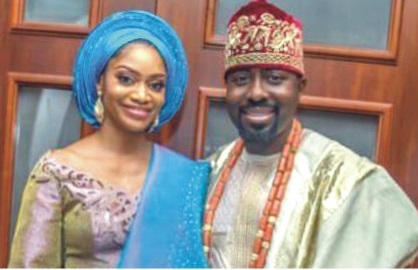 •How The Shut Down CALABAR & LAGOS
•Details Of The Classy Wedding

It was weekend of full of unlimited fun when ex-Cross River Governor, Donald Duke’s daughter, Xerona and Lagos society woman, Teju Phillips son, Derin got married in a showstopping wedding which shuts down Calabar and Lagos for 2 weekends. It was a wedding which was attended by many bigwigs from all walks of life because of the rich pedigree and class of the couple’s parents.

The wedding introduction between Xerona and Derin held on October,14th 2017 and followed by a classy traditional engagement at the private mansion of the Dukes in Calabar on Saturday, 14th April, 2018 alongside a superb court wedding while the grand wedding took place in Lagos on Saturday, 21st of April. It began with a church service at the Redeemed Christian Church of God, Olive Tree Parish, Banana Island followed by a classy reception at the Federal Palace Hotel, Victoria Island, Lagos. City People Society Editor, TAYO FAJORIN OYEDIJI (08111811219), brings you gists from the Yoruba/Efik wedding.

AT THE BANANA ISLAND CHURCH WHERE THE COUPLE WERE JOINED TOGETHER
The solemnization of the wedding between Xerona and Derin took place at the Redeemed Christian Church of God, Olive Tree Parish, Banana Island, Ikoyi where the bride’s parents attend. The service was led by the presiding pastor with other officiating ministers. The service started at exactly 1pm and about an hour later they were joined together in the presence of family and friends.

RECEPTION WAS AT FEDERAL PALACE HOTEL
Any reception held at the Federal Palace Hotel is surely for the rich because it is one of the places that has hosted many big functions. It is expensive and asides that, their kitchen will be in-charge of all foods and drinks so you have to be a deep pocket before you use such venue. This venue played host to the Dukes and Phillips children wedding on Saturday which wore a new face lift specially for the wedding. Need we tell you how much money the venue and all the package would have gulped? Huge I must say! The hall was beautifully decorated and it wowed many guest as they walked majestically into the hall.

WHEN YORUBA MEETS EFIK CULTURE
The wedding was rich in culture and diversity. When 2 people of different ethnics gets married, you will see a lot of display of each families culture and this was what happened at the Dukes and Phillips wedding. The traditional engagement had all the trappings of the Efik culture and tradition, and Xerona,the bride played it out with all her outfits for the introduction and engagement. Xerona’s father is Efik and Quas while her mum is Kalabari. The groom,Derin and his family also shone in their Yoruba attire alongside a Yoruba culture in asking for their birds hands in marriage.

HOW LAGOS CELEB WOMEN SHOWED UP FOR GROOMS MOTHER,TEJU PHILLIPS
When a Lagos society woman, like Teju Phillips is having an event,what do you expect? The venue will surely be full of array of society women and big babes. This was what happened at the event as most of all the society women in Lagos trooped out to celebrate with her. Sighted in Calabar were Sen. Florence Ita-Giwa, Dr. Mrs. Wunmi Ogunbiyi,Chief Mrs. Kofo Lugbesan, Chief Mrs. Biodun Laja, Barr Mrs. Sade Balogun, Mrs. Folusho Phillips and numerous others.

When Aliko staged a showstopping for his daughter last 3 weeks in 3 cities, Kano, Kaduna and Lagos,everywhere was shaken to its roots. He made sure he gave his daughter a befitting wedding and one of the special guests at the wedding were ex-Governor, Donald Duke and his wife, Onari. So it was a pay back time for the Dukes too, as Aliko Dangote stormed Calabar for his first social outing after his daughter’s wedding. He was on hand to give full support to his friend, Donald Duke. He was one of the early callers and stayed for several hours at the ceremony.

The emir of Kano, Mohammadu Sanusi was one of the royal fathers of the day. It surprised many guests when the Emir stormed the private residence of the Dukes in Calabar. The Emir and ex-Gov. Donald Duke enjoyed a cordial relationship and this was put to play at the engagement. He also presided over some of the traditional rites, advised the couple, and prayed for them.

OBONG OF CALABAR LED OTHER OBAS

At the wedding was Obong of Calabar, Edidem Ekpo Oto V. He led some of the royal fathers from the south south to the event. He was sighted with some of his Chiefs.

HOW THE DUKES AND PHILLIPS PULLED BIGWIGS TO THE WEDDING

The pedigree of both the groom and brides parents is etched on status and wealth. Coming from an illustrious family tree, the couple’s parents are bigwigs within the social milieu. The grooms father is the ex-Governor of cross rivers state and his wife, Onari was the former First Lady of the state.

DO YOU KNOW LEKKI BRITISH SCHOOL OWNER,BIODUN LAJA AND TEJU PHILLIPS ARE COUSINS?
It is only from us you can get exclusive gists on most celebrities and this is one of it. The proprietress of Lekki British International School, Mrs. Biodun Laja was at the wedding. The popular educationist was at Calabar for 2-days engagement ceremony and all through the wedding week, she was busy putting one or two things together. She played a major role at the party and we gathered, she is a close cousin to the groom’s mother, Teju Phillips.

SEN. FLORENCE ITA GIWA’S PLAYS MAJOR ROLE AT THE WEDDING
Do we need to tell you that Mama Bakassi, Sen. Florence Ita Giwa is a woman with a large heart? She has shown it times without number. She is well loved by her friends and always ready to support her own. Madam Ita Giwa’s role can best be described as the grandmas role at the wedding because she stood solidly behind the Dukes. She was the one who welcomed and hosted Lagos society women who besieged the Calabar city for the traditional engagement. Don’t forget, she is from Calabar, she is an Efik woman, the tribe where ex-Gov.

Donald Duke comes from. So it was so much expected of her that she came out in full force to support the brides parents and also her friend, the grooms mother,Teju Phillips. She is one of the style matriarchs who looked beautiful for the day. She was at the church and reception ceremony and dazzled in a lovely outfit which showed her beautiful figure and glowing skin. She matched it up with a glam headgear and she looked less her age. Her neck was also brimming of a diamond jewelry. She cuts the attention of one of the most best dressed celebrity at the party.

FOR THOSE WHO DON’T KNOW THE GROOM, DJ CAISE
The groom, Anthonio Aderinola is the son of Lagos society woman and former Commissioner in Lagos, Teju Phillips. His father, Engineer Lanre is from the prominent Phillips family in Lagos. The groom is also the grandson of late international businessman, Chief Deinde Fernandez. He is a popular Nigerian DJ, popularly called DJ Caise. mhe is the official DJ for Chocolate city music group. He attended the University of Reading in “Reading, UK where he studied Finance. He also acquired his master’s degree in Finance, as well as a Bachelor’s degree in Economics.

He looked dashing in all his outfits and was well groomed by top stylist, denolagrey. Grooms Efik outfit was made by House of Dagladash, his shoes is David Wej, popular Abuja designer, Seyivodi designed his second traditional outfit, his beads was made by Lagos Big Babe and jelweller, Lushjewels.

AND THE BRIDE, XERONA CHANGED 8 TIMES.

Xerona Lolia Duke, the eldest daughter of ex-Governor of Cross River State, Donald Duke and wife, Onari enjoyed her day to the fullest. She was all smiles and showed to everyone that her love for Derin is out of this world. The international lawyer-turned-guitarist is also a singer. The bride stole her show for the day and stunned in exquisite and expensive outfits for the wedding. When a bride changed 8 times then you should know the outfits rakes in millions of naira.

For her introduction, she opted for an Onyo onyo and double wrapper and honoured her late grandmother,Henrietta Ajumogobia Bobmanuel by wearing her white coral necklace and crown.Her designer for all her Efik outfit, hephzibahhonline also reeled out the news by counting the number of times the bride has changed. She made up to 6 Efik outfits for her. For the Yoruba aspect ,she opted for a Swarovski embellished Teintes De Bijoux 2018 partial nectar mirage motif Komole. For her court wedding, she stunned in a white and Reaiyamah bridal dress which is very expensive.

IT WAS ANOTHER WEDDING HASHTAG THAT TRENDED FOR 2 WEEKS
For all the 2 weekends, the hashtag xd2018 trended speedily on the social media. The bride and groom were also not left out as they were reeling out gists, pictures and how the event was unfolding.

In fact, many belles who attended the wedding keeps flooding all timelines with their pictures, what about photographers, vendors, beauty experts and event vendors? Everybody had a fun filled surfing time. The beauty, the luxury, the class, the style, the love, the friendship, and most especially the culture diversity could not let everyone get over xd2018.

WHEN CALABAR AND LAGOS WERE SHUTDOWN FOR 2 WEEKENDS
The wedding brought activities in the city of Cross River to a standstill as visitors and well-wishers came out in large numbers to grace the traditional wedding of the Dukes and Phillips children at the private mansion of the Dukes.It was a wedding that made Calabar and Lagos environs busy with vehicular and pedestrian activities.Some of the mapped out routes were extremely busy even there was so much busy activities in the air as several flughts made their way to Calabar and Lagos.

THE 120k ASO-EBI GAME WAS STRONG
At the wedding,the couple’s mothers friends did not come to play. They all wore the bullish green colour lace aso ebi which is 100k and 25 thousand naira headgear. They stormed the Lagos reception ceremony in grandstyle, give it to Lagos society women, they shone like stars.

OVER 20 EVENT VENDORS WORKED ROUND THE CLOCK
It is only this magnitude of crowd and such classy wedding that event vendors will numbered up to 20. All of them surely had a filled day. From the event planner, Kexservices to the photographers. Those who took part in the wedding documentary were from photoshoots, behind the scenes and wedding proper , the caterers, the designers, the gifts company and all,they were all on ground to make sure the wedding was a success.

ABOUT BAYELSA QUEEN, PELEBO BANIGO’S
Have you ever seen queen Pelebo lately? the pretty wife of Bayelsa King, Ebitimi Banigo? you will be dazed with her amazing beauty. The tall and beautiful society woman sure knows how to pamper herself, no wonder at a very close to age 60, she still looks effortlessly young and you can mistake her for someone in her 40s. Pelebo Effiom Banigo is well revered in Bayelsa and rubs shoulder with the high and mighty.she was at the wedding and she shares a close friendship with the grooms mother, Onari Duke.