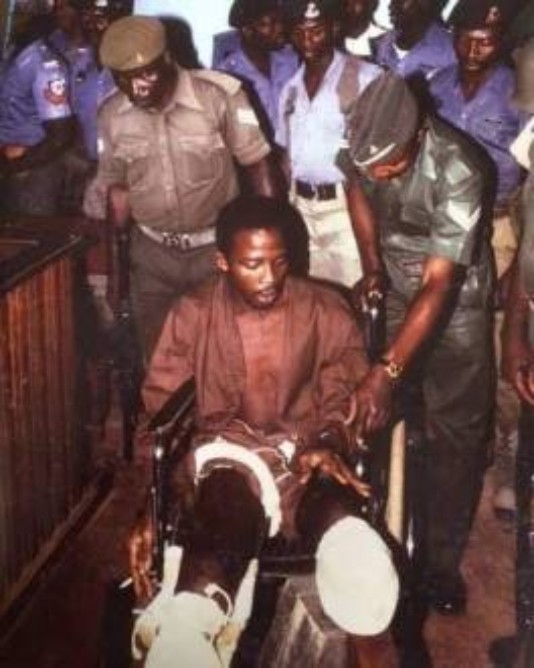 •How He Held BENIN City Hostage For Many Years

Lawrence Anini’s name sound terror to people living in Benin City in the ’80s. Merely mentioning his name could send a people in a peaceful gathering scampering for safety. He was an armed robber with a difference. He started his dastardly activities with what is popularly called one chance, stealing in commercial buses, snatching of cars and taxi-cabs on highways and violent looting of banks, while armed were all grist to his mill. Mostly, his presence anywhere spelt violent crime and death. To make things and the perception of people more complicated, there was a myth in which people deeply believed that Anini had a mysterious power that could make him invisible to human eyes if he wished or if he was in danger of being arrested.

That perhaps was why he escaped arrest for many of his escapades for a long time. It was, therefore, not a surprise that those who believed that Anini had such a mystic power were not only afraid of him but also tremble and panic as they were gripped by fear that Anini on robbery operation meant death and gunshot injuries for those who were unlucky to be within the vicinity of his crime scene.  Those who believed in Anini’s mysterious power it claimed enabled him to easily escape police arrest. That was why such people regarded him as insurmountable and believed that any attempt by the police to arrest him was an effort in futility. They went a step further and declared that only God could bring him to justice. The corruption in the police didn’t help the matter either. The senior police officers from the commissioner of police, Perry Osanaye, to many divisional police officers were neck-deep involved in money for gun scandal that rocked the state at the time. They collected money from Anini and looked the other side when he was unleashing violence during robbery operations.

Thus, Anini had succeeded in creating an enigmatic aura around himself. The police regarded him as an ATM card to the detriment of the people and their property’s security. Another devilish gimmick of  Anini to divert the attention of people and discouraged his pursuit, whenever he was on a robbery operation and felt threatened that he could be caught, was throwing wads of Naira into the air. What a perfect distraction as those pursuing him would run after the Naira notes and thereby allowed him to escape arrest. Perhaps, he took this uncanny trick from the book of Robin Hood. It was a gimmick used by a notorious thief in ancient Great Britain, Robin Hood, who used the same trick to escape arrest. Throwing money in the air was a perfect distraction that created a melee among the pursuing crowd whose members were mostly poor. Seized in the grip of the moment need for money, they could not see anything bad or wrong in struggling for Naira notes in the air based on the belief that they could get something for a meal if they succeeded in catching some Naira notes money thrown at them. The people, at such a moment, people were usually carried away by the emotion of hunger that needed immediate satisfaction and, of course, the craving to satisfy it. They became oblivious of the serial and heavy damaging socio-economic injuries that the thief had been inflicting on them and if he was free and uncaught, would continue inflicting on them.

Lawrence Anini was born in 1960 at Bazahu village, a hillside settlement in the North-East area of Benin City. The village is about 30 kilometres from Benin City. He came to Benin at a very young age to learn to drive. Not quite long after his arrival, he mastered driving and became a taxi-cab driver. He grew in influence among touts and colleague drivers. Perhaps, because of his intimidating physicality and ability to suppress any challenge or revote from his mates at the park, other drivers and touts regarded him with awe. No wonder he became a controller, who could put a stop to violent gangs fight. He was not, however, satisfied with controlling garage gangs, he believed he could put his dexterity into better use for greater advantage by going into robbery. That was how he rallied a robbery gang that he led. Among members of his gang were Monday Osunbor and Ofege. Osunbor was notorious as a daring driver, who could put a car in reverse and run for several kilometres to escape from a crime scene to escape police arrest.

Anini and his gang started with the hijacking of cars and taxi cabs in Benin City. Occasionally, they went for bank robbery, all within Benin City. As time unfolded, Anini expanded his area of operation to other parts of Benin City and the state known today as Edo. There is a wise saying that “no criminal could operate in the area for three months uncaught without police.