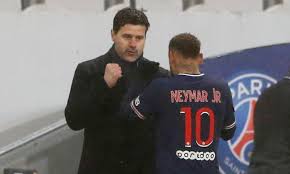 Despite being out on injury for weeks, the highly talented Brazilian and Paris Saint-Germain striker, Neymar Junior returned to action by showing class in a match win against Marseille on Wednesday.

The 28-year-old Brazilian scored an 85th minute penalty to put PSG two goals ahead following Mauro Icardi’s first-half opener to give new coach Mauricio Pochettino the first trophy of his reign in the French capital, and managerial career.

The Champions Trophy is the French equivalent of a Super Cup is usually contested at the start of the season by the league champions and French Cup winners. With PSG winning both last season, Marseille had been selected as their opponents as the Ligue 1 runners-up. This season’s edition was delayed due to the second waves of COVID-19 pandemic.