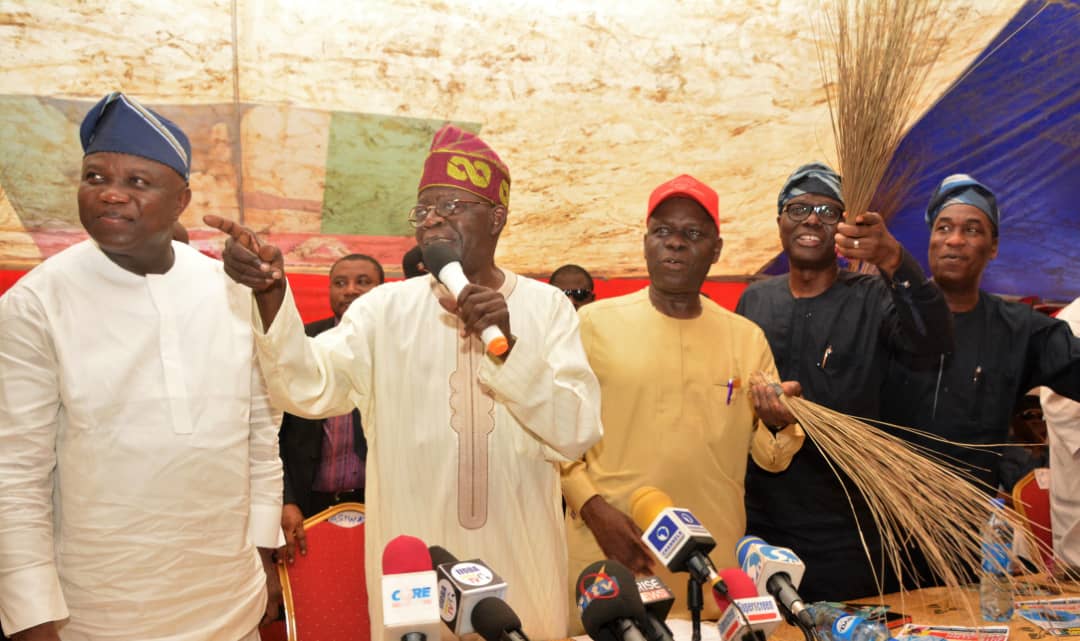 Barely, less than 72 hours to the conduct of Presidential elections, the National leader of All Progressive Party, Asiwaju  Bola Tinubu addressed stakeholders and party faithful over issues of intra-party crisis and other sundry issues.

Asiwaju while speaking at the stakeholders meeting held at the Party-State Secretariat at Acme road, Ogba Lagos on Wednesday, February 20, 2019, made it clear to all party faithful that there exists only one enemy that to be fought and defeated; The People’s Democratic Party.

He also advised the party to ignore any form of distractions that might be put up by the opposition to sow a seed of discord amongst them.

The PDP has nothing to offer than to cook up ugly story planted by ugly persons to cause disaffection in the land of limitless opportunities and the pride of the nation. “This is an election period and politicians are trying to upstage one another by resorting to playing to the gallery by manufacturing lies, innuendoes and outright subterfuge to gain advantage.  This is not the culture of our dear APC and it can never be.

“Let it be known and it is hereby made known that APC Lagos and at National level cannot be defeated through brigandage, political irresponsibility and rascality.  The PDP are enemies of our great party, they do not mean well and therefore cannot succeed.

“We are therefore asking our teeming supporters to ignore the antics of the enemies of progress. Let everyone of us go out en mass on Saturday and vote massively for all our preferred candidate in the APC.

We have defeated them before. We will do it over and again.

Asiwaju also advised the youths in the party to be in their best at the poll. He advised that no youth or member of the APC should be caught in the disgraceful act of ballot snatching, as he believes in the position of President Buhari that anybody who is caught with ballot box will pay with his or her life.

Speaking on the postponement of the election, Asiwaju defended the INEC, he said “It depends on how it is handled and the process. How the process is managed; you can convert a crisis–a situation of adversity to an opportunity and progress.

“The INEC, under the law, is empowered to postpone, cancel and do whatever is necessary to ensure a free and fair election. No party can reverse that. So, we are ready for Feb. 23.”

The event had almost all the Lagos APC bigwigs in attendance some of which include the executive Governor of Lagos State, Akinwunmi Ambode, the deputy Governor, Oluranti Adebule, APC candidate and his deputy, Babajide Sanwoolu and Obafemi Hamzat, APC leader, Odumbaku, and former deputy governor Lagos State, Femi Pedro, all the Local Government Chairmen and Development Area chairmen, commissioners and mobilization teams.

#NigeriaDecides: ‘We only have one enemy to defeat, & that’s PDP’ – Asiwaju charges APC Stakeholders was last modified: February 22nd, 2019 by Reporter