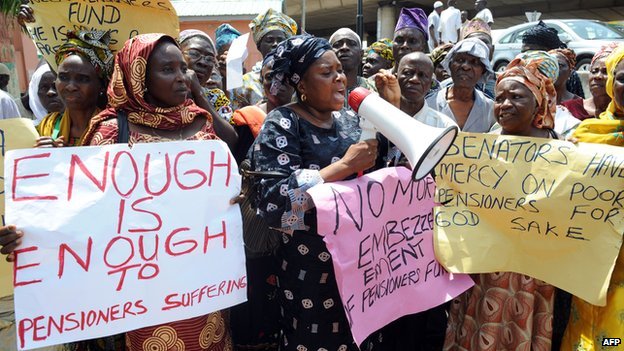 Pensioners in Osun State under the aegis of Forum of 2011/2012 Pensioners on Wednesday staged a fresh protest to demand payment of the arrears of their pensions and gratuities.

This fresh protest came just a day after Governor Rauf Aregbesola confirmed that he had received N6.314bn as the second tranche of the Paris Club loan refund.

The Chairman of the forum, Mr Omoniyi Ilesanmi, who led the protest said the governor should use the money to pay the entitlements of the senior citizens.

He said the pensioners were being owed one-year full pension arrears and gratuities from 2008 to 2012.

The pensioners stormed the State Civil Service Secretariat at Abere and blocked part of the road but they allowed workers and others to go in and out of the place.

Armed with placards with various inscriptions the retired workers sang anti-government songs and rained abuses on the governor.

The protesters said no fewer than 2000 of their colleagues had died due to lack of money to buy food and to treat themselves.

Ilesanmi vowed that the pensioners would make the state ungovernable for the governor except he paid their entitlements.

Ilesanmi said, ” The governor should use the N6.314bn he just collected to pay us. He should look for money from anywhere to pay us all our entitlements.