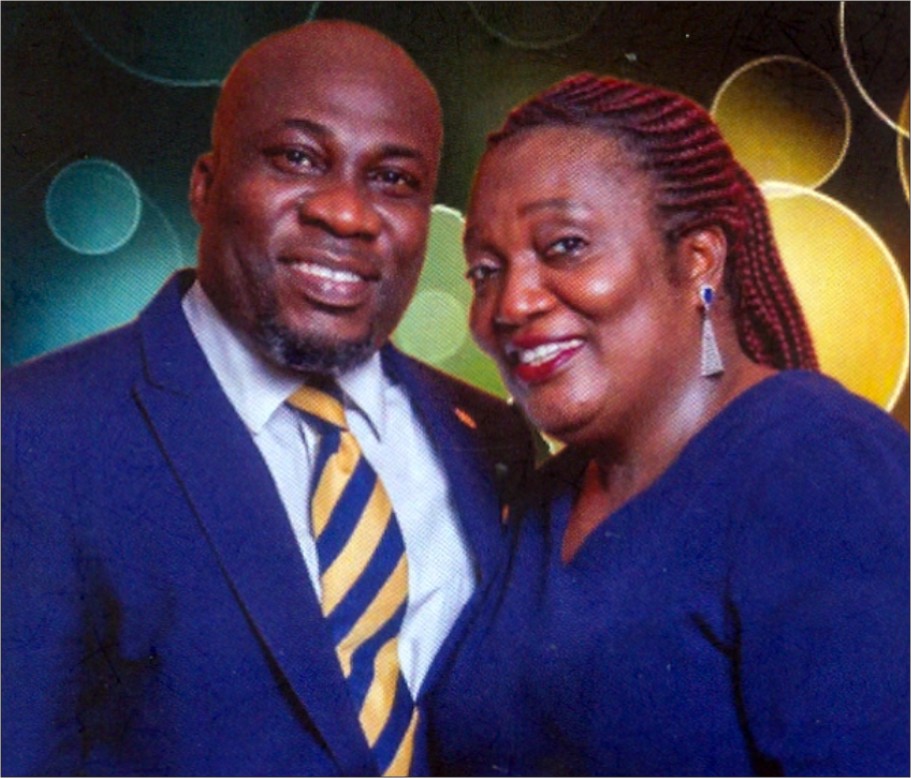 OVATION Editor, Michael Effiong James was honoured a few days ago in Lagos when he was installed as the 33rd President of Rotary Club of Ikeja South. It was a well-attended event as it also marked his 50th birthday.

Rotarian Michael Effiong James is a Reporter and chronicler of celebrities who has over 20 years of hands-on experience in celebrity reporting, media management and perception management. He is currently the Editor, Ovation International and Contributing Editor, The Boss Newspapers. Born at the famous Island Maternity, Lagos to Mr Gregory Imeh James of Nung Oku Ibesikpo. Akwa Ibom State and Mrs Affiong James, both of blessed memory, Michael who is the second son of the family has spent almost all his life in Lagos and is affectionately called Olorogun by close friends. His early years were spent in Surulere, Lagos where he attended, Premier Day Primary School, Rafiu Williams Crescent, and St Joseph ‘s Boys High School, Owodunni Close, both in Surulere. After Secondary School, he was still contemplating his future and waiting to take the almighty Joint Admission and Matriculation Board (JAMB) examination, when he spotted an employment notice for a Clerk at an Estate Agency. That agency in Aguda, Surulere was where he met and interacted with Miss Toun Tuakli-Lawson, a broadcaster at Radio Lagos and later her mother, Mrs Henrietta Orefeko a Producer at Radio Nigeria 2. The chance meeting changed the course of his life. Miss Tuakli Lawson saw potential in him and advised that with his spoken and written English skills, he should consider attending the Nigeria Institute of Journalism while awaiting JAMB. This was how his adventure and love affair with journalism began.

Under Miss’s Lawson guidance, he enrolled at the Nigerian Institute of Journalism in 1989, and with

lecturers like Alhaji Lateef Jakande, Dr now Prof. Ralph Akinyele and Mr Adedayo Ojo, he was smitten by the profession. The love became stronger when he served as an intern at Radio Lagos, where he was a Reporter and Contributor to the popular programme, Young Generation (Y6)’s club with Akin Adesola as Presenter. his mentors included Mr Tokunbo Ojekunle and Mr Yinka Adagun. He also spent months on an internship at the National Concord under the tutelage of Alhaji Liad Tella, who was Deputy Editor and Mr Okey Ifionu. At Concord, he learnt proper newsroom ethics, news writing and also the power of cultivating sources and contacts. At NIJ, he was a popular Campus Journalist, focused on entertainment and gossips as well as was a key member of the School’s football team. In fact, his first trip outside Nigeria in 1990 was to Ghana by Ship during a football expedition and exchange programme with the Ghana Institute of Journalism (That was a memorable trip not because it was his first outside Nigeria but many of the students were so seasick that the return journey had to be made by road, which turned out to be a wonderful, fun-filled experience) By the time he completed his two year programme, his mind was made up on the profession to pursue. He was very passionate about reporting and the art of writing. He was keen on writing about celebrities after seeing the reaction of students to his stories on the campus notice board, and was therefore delighted when Mrs Tuakli-Lawson introduced him to her friends; Mayor Akinpelu, Femi Akintunde-Johnson and Kunle Bakare, who had just floated a soft-sell magazine called Fame.

Fame was the numero uno magazine at the time, the magazine used to sell hundreds of thousands of copies and was the toast of the reading public and therefore, it was a dream to be given the opportunity to work there. But this dream almost died, when he arrived Fame’s WEMABOD Estate, Ikeja office with the note from Aunty Toun only to be flatly told that the organisation had no vacancy. He was dejected but instead of leaving in despair, he asked if he could be allowed to contribute for free. This offer was accepted by Mr. Kunle Bakare who was the Managing Editor. He grabbed this opportunity with both hands and faced the assignment with gusto. He wrote all manner of stories from sports to entertainment, court proceedings to celebrity gossip and interviews. In no time, a decision was reached to pay for his article and when his monthly take-home became consistently more than the Magazine’s Staff Writer, Management invited him for a meeting and offered him the position of Staff Writer in 1992.

He soon became a Senior Staff Writer and then Society Reporter after his boss, Mayor Akinpelu identified him as a capable hand to handover a two-page society pullout called High Society. With High Society, he soared, his creatively crafted stories and smooth writing style became the toast of readers, and he was soon the king of celebrity news, attending many functions some of them incognito because not all his reportage were complimentary. He was rose to became General Editor. At Fame, he anchored many earth-shaking cover stories the most prominent being the wedding of Bianca and Ojukwu. The full story, he has assured, will be captured in a soon-to-be-released book. Following a board squabble at Fame, he, like all the editorial staff, moved to Encomium Magazine which had Kunle Bakare and F Femi-Akintude Johnson as founders. He was made Editor and anchored the publication’s maiden cover story. The wedding of Simi Diya, Son of General Oladipo Diya, Nigeria 2nd in Command at the time. While still working full time, he sat for and passed JAMB and was admitted at the Department of English Language, University of Lagos. He graduated with a Bachelor’s of Arts Degree (Second Class Division) majoring in English Literature. In 2003, he moved to ‘Ovation International Magazine where he has been Editor ever since, a testament to his sense of loyalty and professionalism. He oversees the day-to-day running of the publication which has multiple operations across the world. He also headed the Magazine’s operations in Ghana, oversaw the launch of Ovation weekly and other projects of the global brand. Under the direction of the Publisher, Bashorun Dele Momodu, the brand has since given birth to Ovation TV, the Boss Newspapers, Ovation Books and its yearly star-studded event, Ovation Carol. Well-travelled Rotarian Michael has covered and anchored the production of many landmarks events for Ovation. In 2003 when Her Majesty Queen Elizabeth II visited Nigeria he covered the ceremonies involving HRH Prince Phillip in Lagos, In 2005, he was the only African journalist accredited by Clarence House to cover the Wedding of Prince Charles and Camilla at Windsor Castle.

He joined Rotary in 2012 and has served in different Club Committees including Public Image, Membership, Rotary Foundation and Service Projects. At the District, he has served in many capacities including as two- time Member, District Conference Committee, Member, Friendship Exchange Committee, Member, Public Image Committee for the past three years, Member, Nigeria Polio Plus Committee, Public Relations Sub-Committee and District Governor’s Installation Committee. He has attended two Rotary International Conventions in Toronto, Canada and Hamburg, Germany and is a Part Three graduate of Rotary Leadership Institute. Rotarian Michael Effiong James is a Member, Nigeria Guild of Editors, Member, Society For The Protection of Journalists, Member, Global Editors Network, Associate Member, Nigeria Institute of Public Relations and Associate Member, Nigeria Institute of Strategic Management. The deeply religious lover of books with a rich library who cherishes integrity and hard-work is married to Oluwakemi, a businesswoman who runs a healthy-living catering outfit, Limelight Catering, and together, they have two Children: Kufrebasi Oluwatoni and Aniteientebasi Oluwatobi.