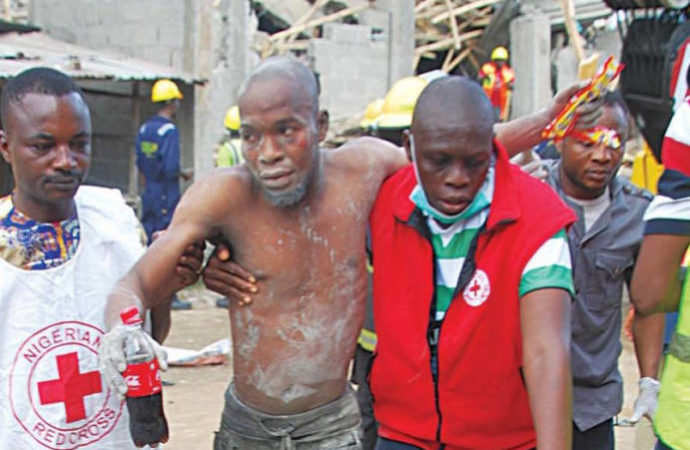 A three-storey building, under construction, collapsed on Thursday at Number 4, Richard Abimbola Street, in the Ilasamaja-Isolo area of Lagos on Thursday, leaving three workers dead and 16 rescued.

The incident occurred around 2:00pm with over 30 workers trapped as the head labourer, who refused to give his name, confirmed, in tears as he tried to call the trapped labourers. He said some were answering their phones, but several could not be reached.

The street urchins helped in the rescue of two, who were rushed to a private hospital before the arrival of emergency services.
The collapsed building affected both buildings beside it as a church on the right was completely crushed while the building on the left was partially damaged.

Residents in the area claimed the construction, which began around February 8, was tilting to one side and when they raised the alarm, the contractor said there was no problem but added a pillar on the bent side before the unfortunate incidence occurred.

It was also claimed that the building was roofed yesterday.

According to a resident, “Whenever the regulatory body visit, they just collect money from the developer and go away. When he added another floor and people complained, it was sealed but was re-opened that same day and work continued. How can you build such an edifice so quickly?”

The Sole Administrator for the Isolo LCDA, Abimbola Osikoya, however refuted this claim, saying that the officers could never be compromised. She said she wasn’t aware of what could have caused the collapse but speculated that the load was too much for the land. She promised that they would find the owner as quickly as possible and punish him accordingly.

The General Manager LASEMA, Tiamiyu Adesina, confirmed that 16 people were rescued but were still expecting an excavator for proper recovery for those trapped.

Refusing to comment if the building had the proper permits, he insisted that their focus was on recovery and investigations would follow.

The developer of the building is at large as his mobile phone was switched off when calls were made.

Three killed, 16 rescued as building collapses in Lagos was last modified: May 19th, 2017 by Arinze Ago

THE THREAD: THE UPSIDES AND DOWNSIDES OF NYSC POSTING

Pastor Agrees to Swear By Oba’s Juju in Benin Community

[…] Metro, he said that as at 12.35 a.m. this morning, three dead bodies had been recovered Read: http://www.citypeopleonline.com/three-killed-16-rescued-building-collapses-lagos/ “We rescued 19 persons, including a teenager, while the right limb of one of those rescued alive […]