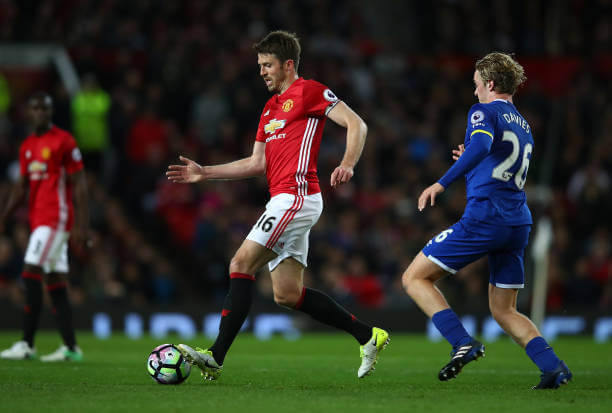 Manchester United midfielder Michael Carrick says they will not give up on a top-four finish despite slipping off the Champions League qualification pace with successive draws against West Brom and Everton.
“You can’t give up on anything and results can go funny ways sometimes,” he told MUTV.
“We’re obviously giving ourselves the tougher task, but we’re not giving up.”
United can also qualify for next season’s Champions League by winning this season’s Europa League. They are in the last eight.
Manchester United have played 20 games unbeaten however with a couple of draws and Tuesday was not an exception.
Before then, though, it had looked as if seventh-placed Everton were about to leapfrog United in the table on goal difference when a rare and deft Phil Jagielka goal gave the visitors a first-half lead.
England centre back Jagielka showed the predatory instincts of a goal poacher, latching on to Williams’ header from a 22nd-minute corner and, with back to goal, holding off Marcos Rojo to conjure a shot that trickled between keeper David de Gea’s legs.
Jagielka’s first goal this term prompted an urgent response from United, with Ander Herrera’s effort striking the bar, but even with Ibrahimovic back in the team, United were blunt, with Paul Pogba also heading against the bar after the break.
“Did we have chances? Yes. Did we hit the post as always? Yes. Did the keeper play well against us as always? Yes. Did a decision go against us? Yes,” Mourinho said.
Leicester’s sixth straight win in all competitions under Shakespeare with second-half goals from Islam Slimani and Jamie Vardy completed a miserable day for Sunderland boss David Moyes.
Earlier on Tuesday, Sunderland had offered support to Moyes while also saying comments that he made to a female BBC reporter after his team’s defeat at the weekend, suggesting she “might get a slap”, had been “wholly inappropriate.”
Moyes has since apologised for the comments.
The defeat left Sunderland three points adrift at the foot of the table, still eight points from the safety zone.
Watford won a second match in succession by beating West Bromwich Albion 2-0, with Troy Deeney becoming the first player to score in four straight Premier League games at Vicarage Road.
Burnley also eased the pressure on themselves, ending a seven-match streak without a victory as George Boyd got the winner just before the hour in a 1-0 triumph over Stoke City.