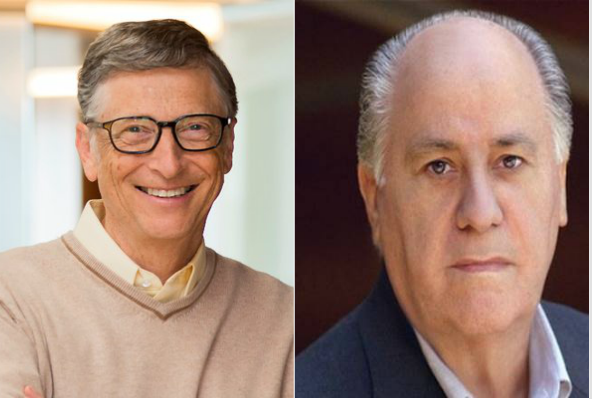 Spanish retail tycoon and Zara co-founder Amancio Ortega became the world’s richest person on Tuesday afternoon before losing the spot to Bill Gates once again, as per Forbes.

It was a tight competition between the two leaders as Ortega took a lead of a few millions on the Microsoft boss before falling behind when the US Markets closed.

The two were separated by a few million dollars only which forced them to switch positions in a gap of few minutes. As of 1:45 PM, EST, Bill Gates was the world’s richest person with a lead of few millions. At 2 PM, Ortega narrowed down the gap.

While Bill Gates’ net worth stood at $84.722 billion, the Zara boss’ wealth was at $84.72 billion. However, in the next few minutes, Gates net worth dropped by 7 million dollars allowing Amancio Ortega to become the world’s richest man. However, when the market ended Ortega finished $100 million behind Bill Gates, on the second spot.

Bill Gates has held the spot as world’s richest person for 18 out of last 23 years on Forbes’ annual Billionaires List, published each spring. However, this isn’t the first time when Gates position on top was challenged. He has been passed three times in last two years: twice by Ortega and once by Amazon founder Jeff Bezos. Yesterday, Ortega very briefly took the top spot from Gates for the third time.

Ortega who founded Zara’s parent company Inditex passed Gates for the first time in October 2015. Back then, he had a net worth of $80 billion and failed to keep his spot for less than a day. He then took the top spot for two days in September 2016. In July, Amazon boss Jeff Bezos was the world’s richest person for a single morning as his net worth surged above $90 billion.