How Gov. GANDUJE Became TINUBU’s No 1 Ally Up North 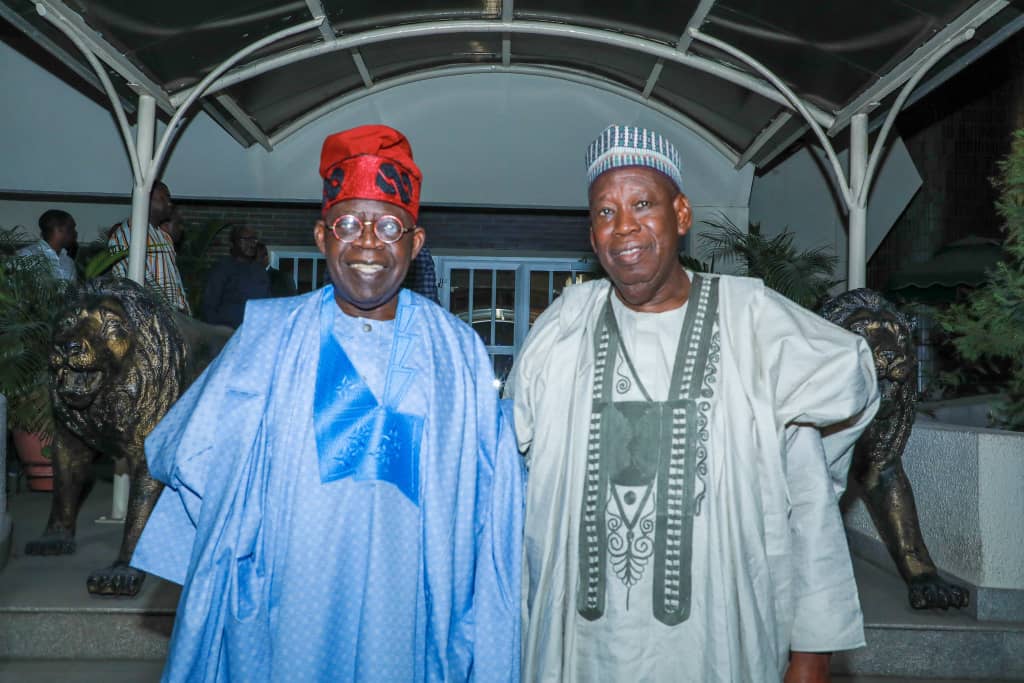 The recent closeness between the All Progressive Congress, APC, national leader, Asiwaju Bola Ahmed Tinubu and the sitting Governor of Kano State, Abdulahi Ganduje, has attracted media interest and political pundits are already giving speculations and various perceptions on the sudden friendship between the Lord of Lagos and the Mafia of Kano.

In the last two months hardly will there be a story on Asiwaju that will not include Ganduje and every comment by Ganduje usually tilts toward the support of Asiwaju and the 2023 presidency.

In March 2023, Asiwaju stormed Kano State with his army of loyalists who are very strong at the federal capital to celebrate his birthday despite protest in some quarters against coming to Kano. Specifically, the Arewa Youth Consultative Forum (AYCF) asked Governor Abdullahi Ganduje not to host Tinubu’s birthday in the state,

Asiwaju, expressing his good impression about the leadership style of the Kano State Governor, Dr Abdullahi Umar Ganduje, in managing and accommodating different ethnic nationalities with love and patriotic posture, the National Leader of All Progressives Congress (APC), Senator Asiwaju Bola Ahmed Tinubu, described the governor as a “Transformative and reformative leader.”

He was physically moved by the many encomiums showered on governor Ganduje, on how he handles all issues related to all Nigerians residing in Kano, irrespective of ethnic or religious differences.

Pundits traced the friendship between these powerful stakeholders back to 2018 when the Kano Governor was enmeshed in corruption allegation. A video of the governor collecting a huge sum and putting it in his Baba Riga emerged online and it went viral on social media. This video put a question mark on his hard-earned integrity, to speak less of the fact that he was contesting for his second term.

His handlers struggled to convince Nigerians and the people of Kano State that the video was doctored, but no one wants to believe it.

In the early days of 2019, Ganduje became a regular visitor of Lagos State, and suddenly became a political right-hand man of Asiwaju. In a matter of weeks before Ganduje’s second term elections, the matter died a natural death and Ganduje became the strong political force he used to be.

There were, however, speculations that he was able to wriggle out of the bribery mess, because Asiwaju stepped in and pushed all the right buttons on his behalf. It was also argued that Aswiaju was the brain behind the political calculation that ushered Ganduje into the office for the second term.

Two years before, Ganduje kept his friendship circle so little and the southern ally he had was the late Ibadan governor and lawmaker, Abiola Ajimobi.

Just about the period before the 2021 annual colloquium, Governor, Ganduje took Asiwaju by the hand to all the places that matter in Kano. They were with the Emir of Kano and all the Akimis in the suburb of the state, they met with all the youth leaders and market women leaders to secure their loyalty and support ahead of 2023.

Ganduje emerged as governor for the second term under a very intense condition in, and has moved on to create a formidable political a structure that has made him a phenomenon to consider in any political permutations. For the very first time, Ganduje pulled Asiwaju out of his comfort zone to celebrate his birthday in the heart of the state of commerce, and also host the annual colloquium in his honour. Kano State also remained one of the powerful K-States that determine who gets what from the presidential elections like we’ve seen in the last 4 elections.

The pairing of the two powerful leaders will form a formidable force in the coming presidential election.

Pundits who are following the unfolding political calculations believe that the relationship between the power brokers has become a huge threat to northern forces that do not want Asiwaju to contest in 2023. Having two phenomenal political radicals in one camp spells doom for whoever is pulling the strings from the outside, and they are not happy about it.

The question of whether the friendship will endure until 2023 becomes a subject of debate as interest remains the only constant factor in politics.

READ ALSO: HAVING BEEN MY BROTHER’S P.A FOR 13 YEARS HELPED ME – SUP. EVANGELIST TOSHO OSHOFFA

How Gov. GANDUJE Became TINUBU’s No 1 Ally Up North was last modified: May 17th, 2021 by City People

Having Been My Brother’s P.A For 13 Years Helped Me – Sup. Evangelist TOSHO OSHOFFA

IJEBU-IGBO Set To Have New King (Orimolusi) 27 Yrs After