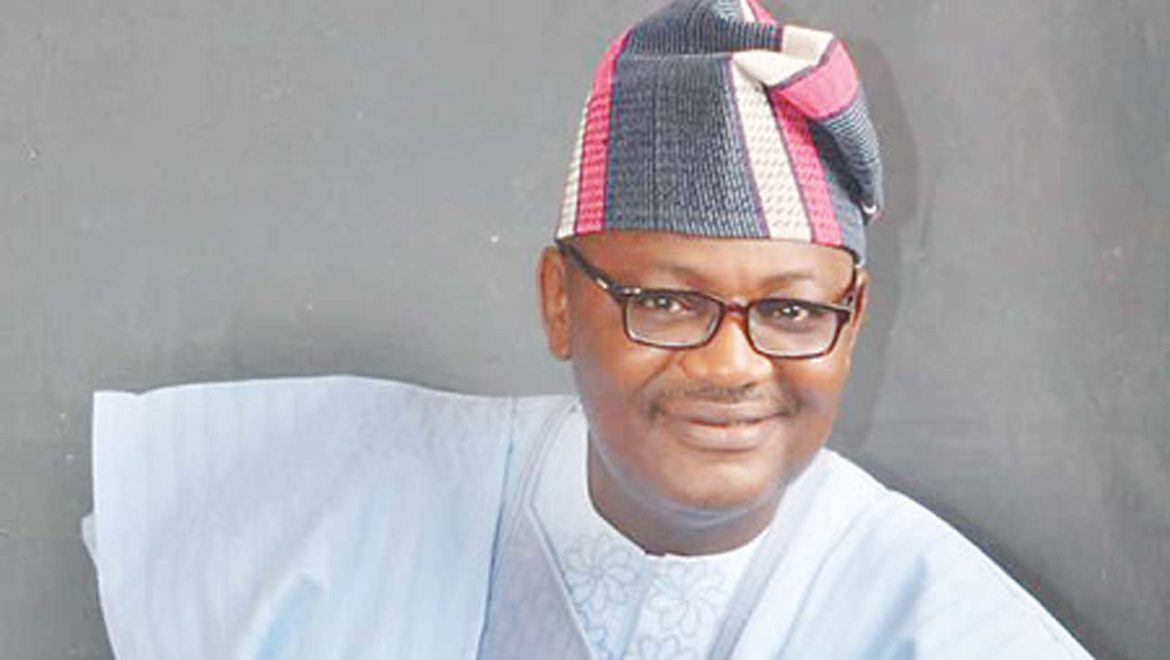 •At The 2019 Ogun Governorship Elections

It is no news that politics in Ogun State come 2019 will be an interesting one. And it is one state to watch in the next election, as the crisis in the ruling party APC and the second popular party PDP keep deepening each day. It has gone beyond mere power tussle to a real bitter war. These two parties have been factionalised and each faction wants their aspirants to be the one to flag the banner of their party , especially the gubernatorial candidates.

The new political bride in Ogun State that is currently enjoying a smooth campaign and also crisis-free is the African Democratic Congress (ADC) in Ogun State. It is no doubt enjoying all the attention of the people of the state, the movement has been on for months now after the Coalition Movement became a political party and since then the party has become a force to reckon with.

Political analysts in the state have argued that with the crisis in both the ruling party APC and the second popular party in the state , it might be a smooth ride for ADC to take over the government come 2019. Two things that will work for the party apart from the crisis confronting APC is that  Prince Gboyega Nasir Isiaka (GNI) , a two term gubernatorial candidate, (he contested in 2011 and 2014 under PDP and PPN but lost in both elections to the incumbent Governor, Senator Ibikunle Amosun) , according to analysis might win the 2019 election with sympathy votes from the people of Ogun State.

The Yewa Factor is also another plus for the party , before now it is said that the Ogun West deserves to govern the state as they have not been opportuned to rule since the creation of Ogun State over forty years ago, GNI who has been consistent with his ambition to serve his people has an upper hand from the three senatorial districts of Ogun State is very popular and also a grassroot politician.

From the crisis in APC and PDP a lot of politicians have defected from both parties to ADC. ADC which parades Prince Isiaka is a party that has posed a big threat to the chances of APC’s continuous hold on Ogun State. GNI, as he is fondly called, has contested the guber race of the state on two occasions. First was in 2011, when he contested on the platform of the Peoples Party of Nigeria, PPN, a political party sponsored by then incumbent governor of the state, Otunba Gbenga Daniel, against the emergence of Gen. Adetunji Idowu Olurin (rtd.) as PDP’s candidate.

Though he is contesting on the platform of a relatively new political party, ADC, GNI has so much enjoyed the support of the people of his area in Ogun West senatorial district, who are all agitating that it is their turn to govern the state. Isiaka is also banking on the support likely to come his way from the tacit support of former President Olusegun Obasanjo for the ADC.

Analysts are worried that unless the ruling All Progressives Congress (APC) in Ogun State finds a way to resolve the current crisis-free crisis ripping it apart, the party and its candidates may find it difficult to make become good showing at the various elections across the state. Sources within and outside the APC say the current confusion over who the rightful governorship candidate of the party should be is fast tearing Governor Ibikunle Amosun’s party into shreds under his watch.

Buoyed by Amosun’s unrelenting support for Ogun West Senatorial District in the governorship race, political leaders in the zone, especially within the ruling APC, according to reliable party sources, are determined to do everything humanly possible to ensure that no other person, apart from Hon. Adekunle Abdulkadir Akinlade, their son, who got the endorsement of the governor to fly the APC ticket, emerged as the party’s candidate.

On the other side of the same state, prominent political leaders, within and outside the ruling party, have lined up behind the aspiration of Prince Dapo Abiodun, the Remo royal blood who got declared as the APC governorship candidate by the National Working Committee after two controversial primary elections in the state. Party stalwarts from Ijebu and Remo zones of the state say they will not agree to any resolution that removes Abiodun’s name from the list of APC governorship candidates.

Trouble started for the ruling party when the NWC and the state leadership disagreed over the conduct and outcome of the direct primary election carried out to elect the gubernatorial candidate of the APC. While the APC State Executive Committee announced Akinlade as winner, the NWC Electoral Committee said Abiodun emerged winner in the exercise they supervised.

Expectedly, as the two bodies continued Akinlade and Abiodun’s fate, Governor Amosun, who never hid his preference for Akinlade as part of his commitment to his pledge to ensure that the Ogun West Senatorial District produces the next governor of the state, has his weight behind the Ogun APC leadership, insisting that Akinlade be given the ticket to contest the next election.

PDP on the other hand have had their own share of the political crises for close to two years. The Ogun Party have been in crisis basically caused by the power of supremacy which led to the party having two factions, but as the 2019 election draws nearer the fight and crisis in the party keeps getting messier.

The party conducted two separate primaries and elected two different candidates for the 2019 governorship election in the state.

Another group loyal to Senator Buruji Kashamu and where Engr. Bayo Dayo is the state executive chairman, had theirs at the PDP State Secretariat on IBB Boulevard, Oke – Mosan, Abeokuta with officials of the Independent National Electoral Commission (INEC) said to have been on ground to observe the exercise.

At the end of the exercise with 1,994 accredited delegates, 1979 of them voted for Adeleke Shittu from Ijebu – Igbo, in Ijebu North Local Government Area of the state, to emerge the gubernatorial candidate of the Bayo Dayo group, after Fatai Adeyanju had stepped down for him.

Speaking with reporters, Bayo Dayo maintained that theirs is the authentic primary conducted by the executive Committee deriving its authority from a valid court order since 2016.

After the two factions conducted parallel elections, a Federal High Court sitting in Abeokuta, the Ogun State capital ordered the Independent National Electoral Commission, INEC, and the National leadership of the Peoples Democratic Party, PDP, to accept and process the list of candidates and delegates submitted to them by the Adebayo Dayo led Ogun State Executive Committee of the party for the purpose of the 2019 general election.

The court order followed the parallel governorship primaries held on Sunday by the Dayo-led faction and that of Sikirullahi Ogundele-faction backed by the national leadership of the party.

The two factions of the PDP produced Shittu Adeleke and Ladi Adebutu as governorship candidates, respectively.

However, the Dayo-led group, backed by the Senator representing Ogun East, Buruji Kashamu, in a suit filed before the court, sought an interlocutory order directing the INEC to accept or process delegates and candidates produced by the group as the authentic for the next general elections.

The suit marked FHC/AB/CS/114/2018 between a Dayo-led executive and INEC, equally joined the PDP, its National Chairman, Uche Secondus, and the National Secretary, Ibrahim Tsauri.

Delivering his ruling on Tuesday, after an argument canvassed by Rickey Tarfa SAN on behalf of the plaintiffs, Justice Abubakar Shittu granted an order restraining INEC from accepting or processing nominees except done in compliance with the court order.

Shittu granted four of six prayers of the plaintiffs.

The reliefs granted by the court are: “An interlocutory order is given directing the 1st Defendant (INEC) to accept or process only the list of candidates of the PDP for the 2019 general election in Ogun State authenticated by the plaintiffs as having emerged from primaries conducted by them for the House of Assembly, House of Representatives, senatorial and governorship elections and submitted by the Plaintiffs or their authorised nominees pending the hearing and determination of the originating summons.”

According to inside source , last week it was said that the Governor Amosun’s preferred choice of gubernatorial candidate is on his way to Labor Party where he will get the guber ticket to run for Governor. It was also rumored that Governor Amosun is contemplating on dumping APC for Labor Party too, since his candidate was denied the ticket to run. The news was debunked as it was said that APC at the federal level have promised to withdraw the senatorial tickets from Amosun to run if he moves his candidates and loyalists to Labour party.

Meanwhile, Ladi Adebutu who has been eyeing Labour Party for sometime now , is waiting for the final court decision which has been favoring the Bayo Dayo led faction of PDP as they have been recognised as the only PDP faction in Ogun State.

No doubt Ladi has huge followers, but the situation is hanging in the balance now as he has not been favored to run under PDP and the Labour party he was banking on to run under their umbrella is not looking good for him as Governor Amosun is also planning to move his candidate Tripple A to Labour party.

All these distractions are earning ADC and GNI who is the guber candidate of the party more score as followers of the twoparties are gradually moving to ADC because of the party’s crisis free situation.

How The Crisis In OGUN PDP & APC May Help GNI Win was last modified: February 9th, 2019 by Seun Emmanuel

‘My girlfriend caught me pants down with...