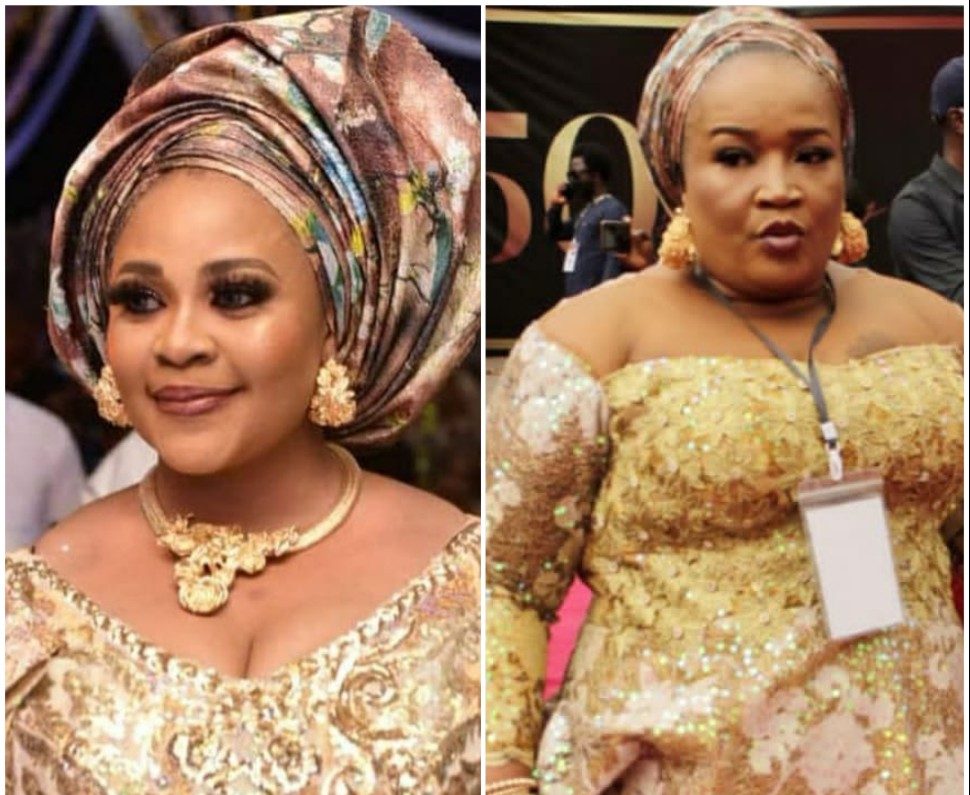 The event was witnessed by dignitaries from different walks of life. And there were lots of side attractions at the party. Everything was top-notch, from the organisation to decoration, food, drinks, entertainment, everything was indeed on point.

The party had 3 special aso-ebi for women, there was a gold category, platinum and diamond categories, and the prices were 60,000 naira, 120,000 naira and the special aso-ijo, which was the most expensive, was 160,000 naira.

At the party, there were some selected guests who share a special relationship with Fathia Balogun and these ladies were part of the organising committee of the party.

They had different tags on, to show which particular areas they were taking care of at the party and they also made sure guests were properly served and taken care off.

Another unique thing this set of ladies did at the party, was that they bought 2 different categories of the aso-ebi, so at the beginning of the party, they all looked gorgeous in the aso-ebi that cost 120,000 naira and later changed to the special aso-ijo, which cost 160,000 naira, and that happens to be the most expensive of them all. They all actually stood out at the party, so much so that the Fuji legend, King Wasiu Ayinde Marshal had to summon all of them to come up the stage when the celebrator wanted to dance. He equally complemented their luxurious 2nd look for the party.

Star actress, Biodun Okeowo a.k.a. Omoburty was among the few selected ladies who stood out in the 2 expensive aso-ebi.

She emerged one of the best-dressed celebrities at the party, her first dress was made by celebrity designer CEO Luminee, while the expensive aso-ijo was designed by Tek Apparels.

Mercy Aigbe is a fashion icon that always stands out at events and parties. A lot of fans always look forward to Mercy Aigbe’s outfit on daily basis because she never goes wrong when it comes to fashion, slaying back to back effortlessly.

Her first outfit was also designed by the award-winning celebrity stylist CEO Luminee. She equally nailed it in her aso-ijo outfit, looking like a new bride in a masterpiece by CEO Luminee. The transformer outfit made it to the best dress celebrities list at the party.

She equally stunned in two beautiful outfits for the party. Her first outfit was the 120,000 aso-ebi, and it was designed Vastmoda and the beautiful dress was breathtaking.

Eniola Ajao is one actress that many fans didn’t know she maintains a very cordial relationship with Fathia Balogun. But it became known to people during Fathia’s party. Eniola Ajao didn’t just stay glued to her during the party but was at her beck and call.

She could pass for the celebrant’s official aide, she helped her godmother out with everything. She was also among the celebrities that stood out in the special aso-ijo for the grand party.

What about Oyita?  The delectable actress was also not left out. She equally settled for iro and buba but still looked beautiful at the party.

Eniola Badmus is gradually becoming a fashion icon, many now look forward to her fashion statements at events. Ever since she acquired her new body, everything changed drastically. She stepped up her fashion sense and now she slays back to back. This particular party was nothing different. She made the best-dressed list and her outfits were breathtaking. Besides wearing the aso-ijo, she was also among celebrities that changed into two different aso-ebi at the party.

What about Lara, CEO Larrit Shoe Village? She maintains a very cordial relationship with Fathia Balogun and she is also a fashion icon on her own. Many that are familiar with her knowledge, she has a thing for luxury and class.

She stood out in the expensive aso-ijo with expensive gold, shoes and purses to compliment her looks.

Highly respected television personality Doyin Kukoyi, who aside from being a close friend to the celebrant, was also one of the master comperes of the grand party. She also stood out in the special aso-ijo. Aunty Doyin as fondly called by many younger stars in the industry changed into different outfits for the party, before wearing the aso-ijo.

Popular actress and Bimbo Oshin’s bestie, Jaiye Kuti handled a special role at the party. She was among the organisers of the party, she even got to the venue very early in the morning to see to the proper arrangement of the venue before guests started arriving. She equally stood out in 2 different aso-ebi for the party and also one of the aso-ijo rockers.

The ever-gorgeous Queen Anu and her friend CEO Mydeesglow stormed the grand party in the aso-ijo for a selected few people.

Queen Anu, stylish as ever, wore a gorgeous dress designed by her humble self and she made the best-dressed list.

Nollywood best friends Bose Akinola and Rukayat Lawal (Iya Ibadan) are among the few celebrities that rocked the special aso-ijo. The pretty commissioner for Tourism Mrs. Uzamat Akinbile Yussuf was among the special guests that honoured Fathia Balogun. She came in the company of her son and looked gorgeous in the aso-ijo. This pretty lady is one that has maintained a special relationship with a few selected actors in the industry and always makes out time to honour them on special occasions and events.

The very beautiful Tope is married to popular veteran actor, Alesh one of the strong members of the Odunfa Caucus. The pretty lady stormed the party in the company of her husband who was also wearing the special aso-ebi for men. She equally rocked the special aso-ijo with few other celebrities.

The award-winning celebrity who was in charge of aso-ebi for “Fathia Unusual” and CE[]O of Nickey Coverings was among the celebrities who rocked the two beautiful aso-ebi at the party.

The pretty lady also rocked the special aso-ijo alongside others.

READ ALSO: WHY LATEEF ADEDIMEJI GOT THE LEAD ROLE IN NEW MOVIE ON ASIWAJU TINUBU