Why Chief BISI AKANDE & I Are Very, Very Close 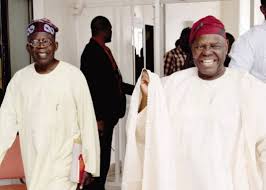 The National Leader of the All Progressives’ Congress, (APC), Asiwaju Bola Ahmed Tinubu, has described the relationship between him and of the former interim National Chairman of the party, Chief Bisi Akande, as a very strong one. He said there was nothing but a close relationship that has been nurtured into a stronger bond over the years.

He further described Baba Akande as a compassionate human being, example of decorum in any circumstance and a people’s leader. The former Lagos Governor described Chief Akande as a devoted friend, who could go out of his way to protect and help others; a mentor to many and father figure to several young politicians. All these, undoubtedly, explain why they have remained close for many years.

Tinubu made this revelations in his tribute in Ibadan, a few days back at a Colloquium organised in honour of Chief Bisi Akande as he turned 80. Asiwaju Bola Tinubu was one of the political associates who graced the Ibadan phase of Baba Akande’s 80th birthday celebration.

“By any estimation, Chief Abdulraheem Adebisi Akande is a great man, companionate human being, an example of decorum in any circumstance and a principled leader who possesses profound judgement and a sage’s wisdom. This highly principled leader, Bisi Akande, stood as a father figure and a mentor to many younger politicians across the country particularly in the South-West. Because of his traits as an exemplary leader and mentor, many call him ‘Baba awonomokekeke’, meaning the political father of the younger ones, who came after him.

He has shown that one can be successful by being kind to all and making concern for the common person and for just society; one’s guiding visions. He is the one of the most humane persons you could meet. To meet him is to like him. To know him is to admire Chief Akande and to be thankful that he is your friend and ally.

What many don’t know is that both Asiwaju Bola Tinubu and Chief Adebisi Akande have come a long way. Tinubu and Akande were governors at the same time fom May 1999 to May 2003. Chief Abdukareem Adebisi Bamdele Akande was a governor of Osun State, from 1999–2003, as a member of the Alliance for Democracy (AD) party, and was the first interim Chairman of the All Progressives Congress.

Chief Adebisi Akande was born in Ila Orangun on 16 January 1939, in what is now the Osun Central Senatorial district. Akande was described as a nephew of the late Chief Bola Ige. Adebisi Akande was elected governor of Osun State in April 1999, running on the platform of the Alliance for Democracy (AD) party, which was formed as a political arm of the Yoruba socio-cultural organisation, Afenifere.

He succeeded Col. Theophilus Bamigboye, who had been named the military administrator of the State in August 1998, and who handed over power on 29 May, 1999.

Chief Akande is one of the few true associates of the late Chief Obafemi Awolowo and Uncle Bola Ige around today. Like them, he devoted his public  life to the ideals and practices that can engender a truly democratic and egalitarian society. “I don’t want to be overtly sentimental but it is not exaggeration to say that knowing Baba Akande has been a true blessing”. Having him as a close political ally has been a pleasure for he helped make history owing to his unwavering faith in progressive governance and his uncanny knack to provide the best counsel just at the right moment.

Our relationship has always been close, but during  these past years that relationship has nurtured into something stronger. He is a founding father of APC and his unprecedented electoral victory in 2015 as the Interim Chairman of the party, he showed extraordinary aptness and patience in bridging differences and moulding our new party into a progressive force. Without him, the APC might never have come into existence and of certainly would not have experienced the quick success it encountered.  He helped lay a solid foundation for the party and did so selflessly and impartially and good word toward all.

“Chief Akande is a devoted friend, who would go out of his way to protect and help those he knows”. Yet, he always has an open hands and welcoming smile for a stranger and he is always willing to give people the benefit of doubt. He prejudges no one and thinks the best of every person and of humanity itself. I have been with him many years and if there is a mean bone in his body I have yet to found it.

“Baba is a highly perspective and thoughtful leader. He has proved invaluable in serving humanity and his fatherland. What he gave to his state, to the Yoruba race, he also gave to to his country, he gave his best. As Governor of Osun State, he served with commitment and dedication. He was a progressive stalwart regarding his objections, and proved to have an expert and diligent stance in terms administration of the machinery of governance. He was unwavering in pursuing what he believed was good and desirable for the state. He governed with a dignity that is rarely found. Yet, he would not flinch from doing what was right even if strong force was arranged against him.

He was a stalwart of the Action Group, and of Unity Party of Nigeria in the Second Republic wherein he served  as Secretary to the government in the old Oyo State. In the Alliance for Democracy, he distinguished himself as our National Chairman during his tenure in that office.

Baba Akande piloted the successor political party, the Action Congress of Nigeria (ACN) from its inception to the place where the party became powerful for spreading progressive governance throughout the South-West. He became a leading spokesperson for Fiscal Federalism and for the devolution of significant powers from the centre to the states in order to have a more equitable Federal union.

As I mentioned before the All Progressives Congress owes Baba a debt of gratitude for the exceptional leadership he demonstrated while managing the party as its Interim nation Chairman. He instituted discipline, transparency and accountability. Under him, internal democracy flourished. Baba Akande has done nobly for his Ila-Orangun hometown and his town’s people should be well proud  of their famous son. He deserves the accolades that have come his way. He deserves to savour the moment as he celebrates his 80th birthday.

My prayer is that God Almighty grant him many more years, so that he can continue to help this nation. May he continue to stand as an example to young leaders and may his wise counsel and civic virtue help guide and shape this nation. May good health, renewed strength and vigour walk with him all his days and may his sterling intellect, warm smile and kind heart always be his trademarks. May God always light his path and order his way for he is one of the finest people on this planet,” he stated.