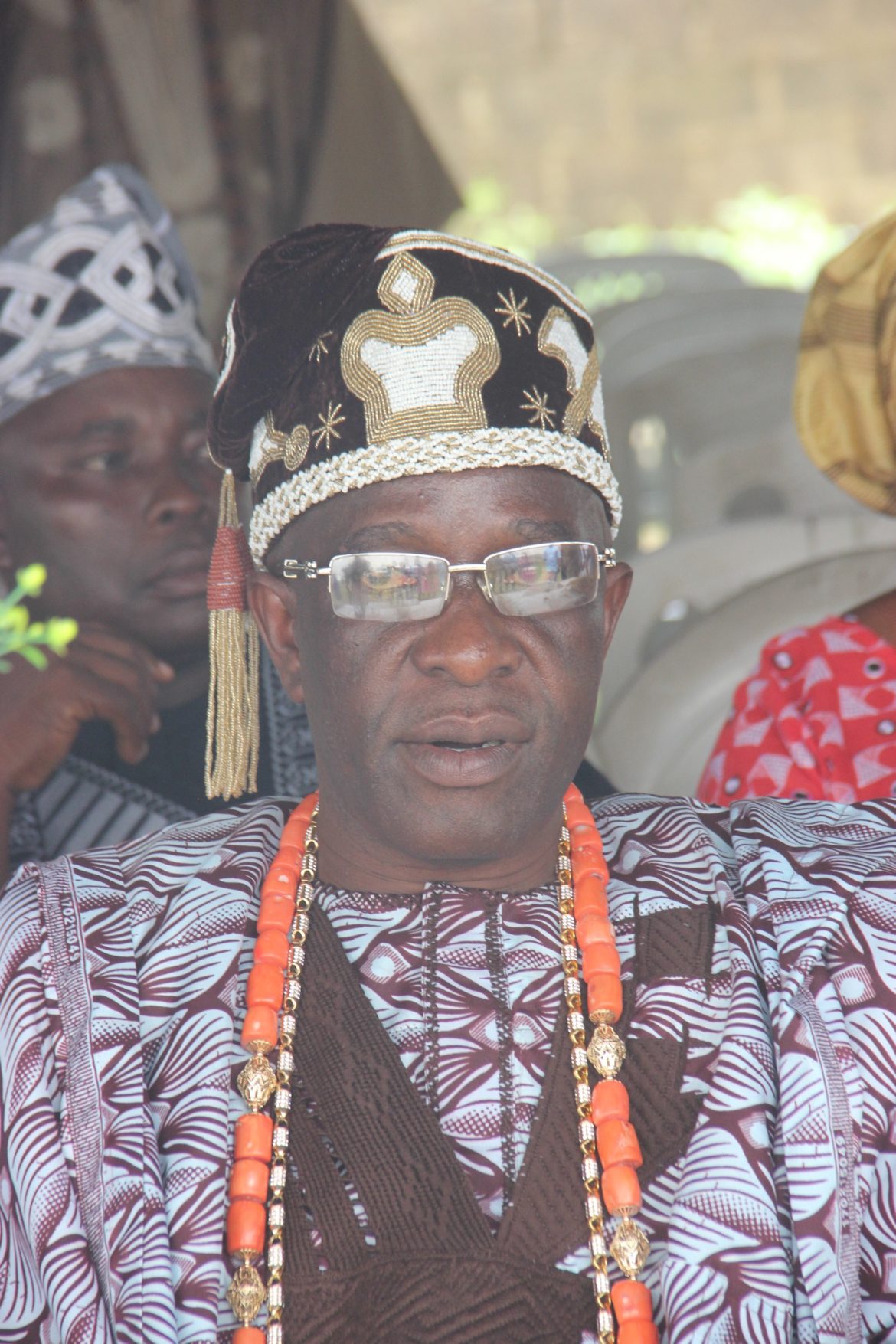 On Saturday, August 4, 2018, the Alayeluwa, Oba (Surv.) Adetunji A Osho, the Owadaniyan II, the Alaye Ode of Ode Remo installed the Group Managing Director of Adron Home and Properties, Oba Adetola Sosanya Emmanuelking and his amiable wife, Yeye Aderonke Emmanuelking, as the Bobajiro and Yeye Bobajiro of Ode Remo at an elaborate ceremony on the eve of the conclusion of the 33rd anniversary of Lafose day.

Speaking at the Installation ceremony, the Alaye Ode of Ode Remo gave some key significance of the highly esteemed title of Bobajiro to Ode Remo and why they had to wait 20 years after the last chief, M.K.O Abiola passed on.

Do you know the title of Bobajiro is the first chieftaincy title given to the late politician and philanthropist, M.K.O Abiola? We know the late business mogul got over 200 traditional chieftaincy title in his lifetime, but his very first was from Ode Remo and it was the Bobajiro of Ode Remo in 1978.

The Alaye of Ode, who is the 21st ruler of Ode Remo in the 21st century, agreed that the selection of Adron Boss as the next Bobajiro after Abiola has more significance to show that the time and the person has been divinely chosen.

Speaking with City People’s Online Editor SEUN JOSEPH and GM Special Project, LEKAN ODUNOWO, the highly revered Oba, spoke extensively about the connections and historical coincidence that show that the new Bobajiro is well deserving of the title.

Let me first congratulate you on the successful Lafose event that was just concluded? Can you please tell us more about the Bobajiro chieftaincy title you gave to Adron Boss, Oba Adetola Emmanuelking?

Yes. It happened first in 1978 during ode Remo development event, M.K.O Abiola came then, he was a big man as it were. He was also a philanthropist. So when he came to Ode Remo, he donated. But the huge amount he donated then, made my predecessor, who was the last two Oba before me in person of Oba Sotinwa to honour him. After the huge donation M.K.O made, he called his chiefs and suggest that he (M.K.O) deserve an exceptional chieftaincy title because of his large heart. The money then was big which I cannot mention now..

And that was the first title he ever got as at the time. It was in 1978. That time I was in my form 3. We were not even allowed to move near, but thereafter, our fathers and brothers made us realize that the Bobajiro title was the first title M.K.O ever got.

And the most interesting aspect of it that drew Adron Boss to it is that 40 is a landmark figure. You remember its biblical. The Israelite were in the wilderness for a long time. It was after 40 years that they were liberated, Jesus fasted for 40 days and 40 nights, it was after the fasting that he got power. Recall that the devil tested him 3 times after 40 days fasting and he defeated the devil because he has finally received power after the fast.

I believe that’s why our elders would say a fool at forty is a fool forever. You can see 1978 to 2018;40. And this person in question is in his forties. So, you can see the significance of that 40 to the person that had that title and to what we did; the Lafose 33rd anniversary.

You can imagine someone who was only informed about 4 days before the event and you saw what happened as if he has been planning it for a long time. He has made us proud and we are not going to forget him easily in Ode Remo. He chaired our Lafoye 33rd celebration in 2018 and we are very happy for being with us and for identifying with us, not only that he also maternally came from Ode Remo. His father is from Ilisan in Remo while his maternal grandmother is from this town; Iya Ogere.

So the title is not by accident. It’s kind of like a son coming back home and its now coming back to now parlie with the Kabiyesi of Ode Remo and we thank God for him and we pray for him that he will continue to do wonders. I want to give him that prayer that connects him with Abiola. Abiola was very big and had everything, and with a large heart who make people happy. Any time you get to Abiola, he can even sign on a tissue paper and when you get to the bank with the signature you come out happy.

And that is what Adron is doing now, so on this note, I want to wish Oba Adetola Sosanya Emmanuelking the Bobajiro of Ode Remo and the  Yeye Aderoonke who is also the Yeye Bobajiro, coincidentally she shares the same name with my daughter.  I wish him long life and prosperity. It will be well with him, his wife and his children and his family.

Kabiyesi, please what is the significance of Bobajiro to Ode Remo?

As long as my former predecessor gave it out, it is very vital. As you can understand, Bobajiro means someone who dialogues with the king; someone who shares ideas and proposition with the king of the land. If you want to formulate a policy, you call him to decide it. You will be involved in decision making with the king.

Can you please shed more light on the significance of Lafose day?

You see, Lafose is what people have coined as a fetish practice but it is not so. Number one, we owe everything to God. He is the Alpha and Omega. The one who says and it materialize in seconds. That is the person we all believe in. that is why you see Christians, muslims, and traditional believers coming together on Lafose day with no form of discrimination. Under Lafose, we are all one. We do things alike when it comes to Lafose. Anything we say during Lafose festival usually come to past. We don’t joke with what we say at Lafose event, definitely God will answer it because we do things together.

Also, sometime in the 1930s, we had a king then. When they were at a meeting, after everyone have said their mind. They will wait for the Alaye to talk and whatever he says is what will be unanimously accepted. If the Alaye ode kept mute, they will say, let the Lafose speak. Anything he says is usually the general resolve. This went on until 1985 when the elders were thinking of the name to give the celebration, so they say anybody that came from ode Remo is known with the Lafose’s slogan. So they agreed to call the event Lafose. That is why you see when people chant ODE, you will hear the response as LAFOSE. That is why as a king in Ode, anything I say will come to pass. So people come to me for prayers because they understand the mystery behind the Lafose slogan. As we celebrate Lafose, our people from UK & US are celebrating at the same time.

Kabiyesi, are we saying that between MKO Abiola and Oba Adetola Emmanuelking, there was no Bobajiro in-between all these years?

No, we never had any. It is just a coincidence. Abiola died 1998 and this is 20 years later. Look at the significance of the event, the coincidence is just too high, and that Is what inspired Adron boss to accept that chieftaincy title.

Kabiyesi, what will this title given to Emmanuelking bring to Ode Remo Considering his antecedent, you see what Adron is doing all over. No doubt, he will bring development to Ode. He is the man behaving like Abiola. Even he is younger than when Abiola was alive and doing a great job. Somebody in his forties; look at what he has been doing. Its been doing for the past 6 years, that means in his 30s, he has been performing wonders. So he will surpass Abiola if he goes on in this manner.

Kabiyesi, how about the Nlokun, Oderaye? Are they also part of Ode Remo?

You know, Ode is an ancient town. To be precise, I’m the 21st Oba here. I’m the 21st Oba in the 21st century. Ode Remo is a town that and so many other sub- towns with. You cannot clearly define the boundary between the three towns; Oderaye, Nlokun, Eposho. There is also a crown community, we call it Ogunmogbo, we have not installed an Oba yet there, but they perform every traditional rite as expected of them. The three communities are part of Ode Remo, but Ode is the central convergence for Lafose.

Finally, Kabiyesi can you give us a brief of your background before you assume the throne as Alaye Ode-Remo?

I’m a young guy in my late 50s, I was a former civil servant from Lagos State civil service. I’m still a registered surveyor. I’m a fellow in the Nigerian Institute of Surveyors. I was a chief surveyor at the office of the Surveyor-general in Lagos State until 2009 when I was chosen to become a king. By God’s grace, I will be celebrating my  10 anniversary in June 25, 2019.

I had my primary education in Ondo State, precisely Ikare Akoko, but my secondary school was at Ode Remo, that is Shapade grammar school. This was when I met Abiola when he became the Bobajiro in 1978. I was in class 3 then. I left secondary school in 1980 and moved to Lagos and joined the Civil Service. Work was so easy then, you just go in and they well employ you. They took up my sponsorship from 1981 to my retirement age.