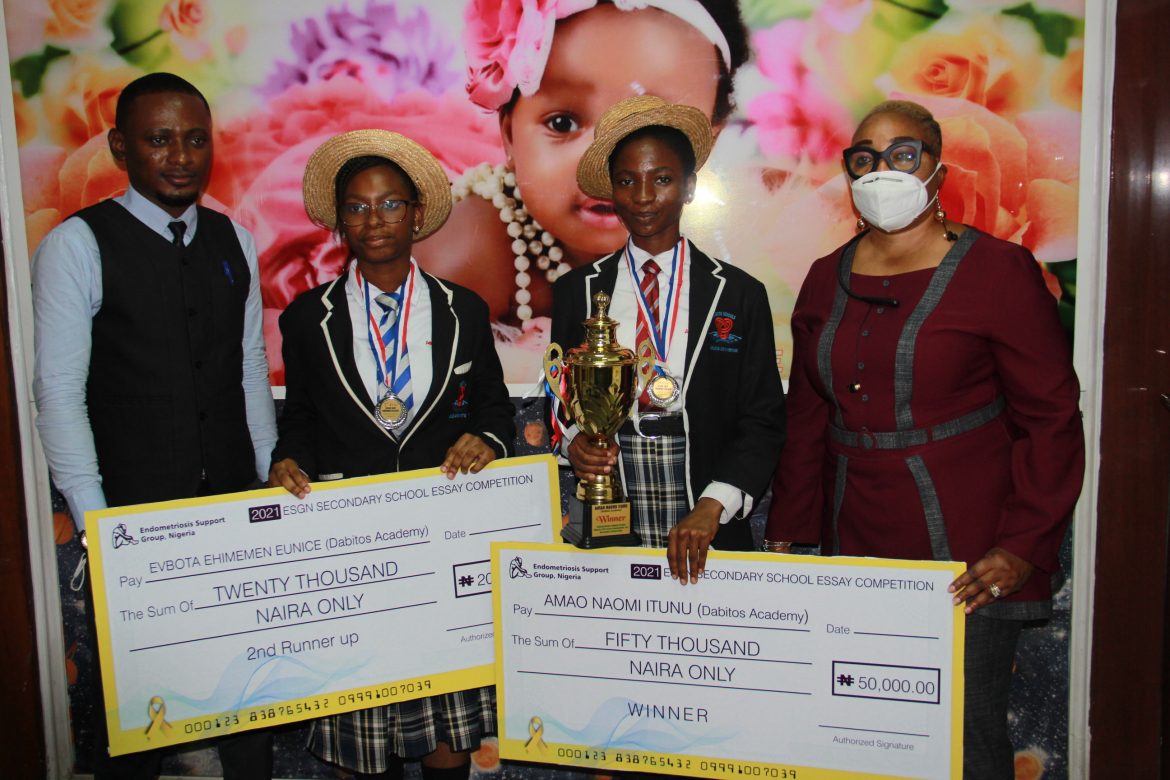 After a rigorous process, the winners were finally named by a committee that includes teachers and medical practitioners. Amao Naomi Itunu from Dabitos Academy emerged winner while Ikegwuonu Rita Chinemerem from the Holy Child College and Evbota Ehimemen Eunice also from Dabitos Academy were named the 1st and 2nd runners up respectively.

Mrs Ajayi while presenting the gifts to the winners enjoined the students to keep making noise about endometriosis and serve as a means of information to their cycles via their various social media handles. Furthermore, Mrs Ajayi noted that every girl-child deserves a better life, therefore, accurate information on endometriosis would help them better peradventure they are faced with the condition or have someone close to them battling the condition.

The event held at Ikoyi in Lagos and despite the COVID-19 restrictions, journalists were able to attend virtually. The competition was designed to engage girls and adolescents in the topical issue of endometriosis and its effects on women of child-bearing age in particular and the female sex generally. The need to sensitize teenagers and adolescents along in the education and awareness campaign against endometriosis cannot be overemphasized. Endometriosis is often ignored in teenage girls, adolescents and young women and medical experts describe it as a challenging problem. It is hidden, progressive and severe and deserves a lot more attention than it is currently getting.

Speaking at the event, the winners revealed how participating in the competition had broadened their knowledge of endometriosis and with what they have learnt so far, they can encourage any girl-child faced with the condition and show them love too.

“I have learnt that having endometriosis is not the end of life, you can always get help through pain as much as laparoscopy could help as well. Anyone living with endometriosis and reading this should know that it is not the end of the world, you can find help, you can find people to help you in this situation and it will soon be over;” the winner, Naomi Itunu from Dabitos Academy said.

Also speaking about how it was to prepare the students for the contest; the teachers revealed that the students that became eventual winners of the event had always been adventurous and so, it was easy for them to make personal researches and come up with write-ups that could compete and win at this stage.

The ESGN Secondary Schools Essay Competition is a platform developed to create awareness among adolescents. It also aims to promote creative writing while also encouraging research for knowledge on Endometriosis.

The 2021 contest challenged students to closely examine the impact of the condition as it affects everyday life. The topic for this year was “Challenges Of Living With Endometriosis”.

Entrants submitted essays in writing to their schools. The schools further submitted their best two essays to info@esgn.org and copied essay@esgn.org. Over 30 schools participated in the contest, journalists were told.

The Endometriosis support group Nigeria (ESGN) is a non-profit organization committed to raising awareness on endometriosis, providing help and support for women living with endometriosis in Nigeria and Africa at large.

Affiliated to the World Endometriosis Society, the foundation has been positioned as a global standard advocacy group for engaging, educating, empowering and eﬀecting change in Endometriosis support in Africa.

Through its initiatives, ESGN places emphasis on the critical importance of early diagnosis and eﬀective intervention while simultaneously providing education to the next generation of medical professionals and their patients.

IT’S A SEASON OF GRATITUDE AS EMZOR ENDS THE YEAR WITH AN EVENING OF PRAISE, WORSHIP, MUSIC AND DANCE.