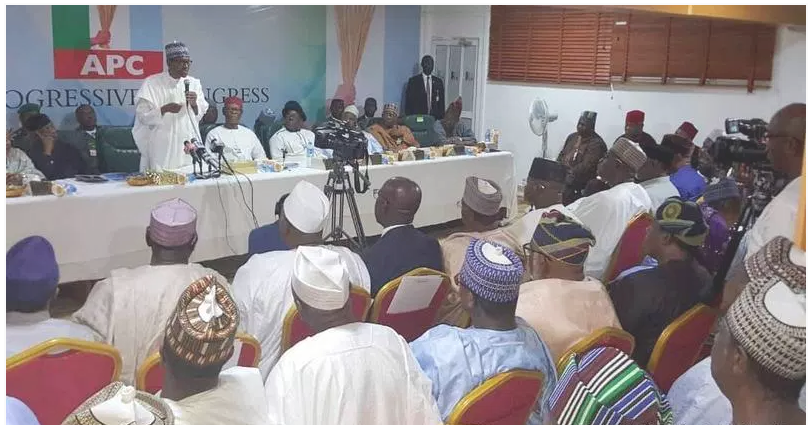 President Muhammadu Buhari on Tuesday shocked members of the National Executive Committee (NEC) of his party when he called for the cancellation of tenure extension for party officials.

The APC had in its NEC meeting on February 28 extended the tenure of members of National Working Committee (NWC) led by John Odigie-Oyegun by one year.

The decision did not go down well with a national leader of the party, Bola Tinubu, who had been in conflict with the national chairman of the party.

Speaking shortly before the commencement of NEC meeting Tuesday, Mr Buhari told a packed hall at the APC national secretariat to consider cancelling the tenure extension decision because “it is against the party constitution and the Nigerian constitution.”

YOU MAY ALSO LIKE: APC TO DECIDE OYEGUN’S FATE AT NEC MEETING

He, therefore, presented the matter “for discussion” at the meeting.

Mr Buhari said he is having a change of heart because he doesn’t want the party’s activities to be faulted by any court of law.

NEC members were shocked because the issue of tenure extension is not in the agenda circulated to members.

It was also not discussed at the national caucus meeting which held at the Presidential Villa Monday night, Mr. Odigie-Oyegun had said.

Caucus meetings are a precursor to what would be discussed at NEC.