Lallana voted England’s Player of the Year ahead of Vardy, Rooney 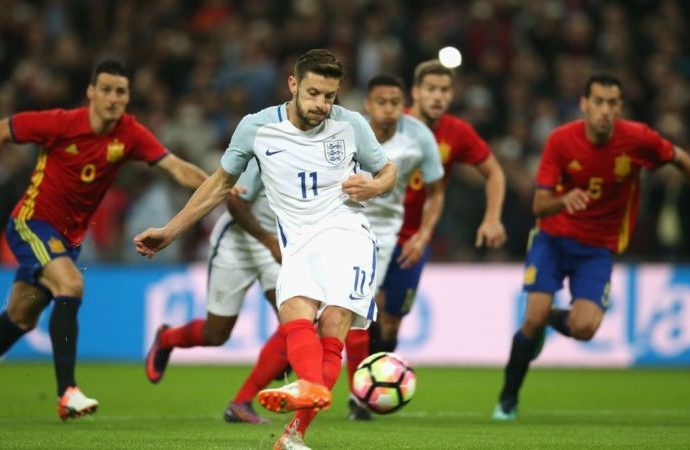 Liverpool midfielder Adam Lallana has been named England’s Player of the Year for 2016.

Lallana took 39 percent of votes from members of the England Supporters Club, beating off competition from Jamie Vardy and Wayne Rooney, who finished second and third respectively.

In a year that saw England crash out early at Euro 2016 and have three different managers, the 28-year-old was a regular under Roy Hodgson, Sam Allardyce and Gareth Southgate.

He scored his first goal for the Three Lions in September’s 1-0 win against Slovakia — Allardyce’s sole game in charge — while he also netted in the 3-0 victory over Scotland and 2-2 draw with Spain in November.

“This award is a huge honour,” Lallana told the FA’s official website. “The last three winners were Rooney [2015], Rooney [2014] and Steven Gerrard [2012] so that just goes to show what a great achievement this is.

“Things have been going well this season for my club so that always helps. When you’re playing well for your club then hopefully you can transmit your form into the national team and help out.

“That’s what has been happening but I don’t want that to be for just one season — I want to continue that for as long as possible. Off the back of a disappointing year for England as a whole, I’ll be looking to definitely improve in 2017 and hopefully we can build on how it has started under Gareth Southgate, as there have been plenty of positives.”

Lallana will hope to be in the England side when they are next in action against Germany on March 22 in a friendly, with a World Cup qualifier with Lithuania following four days later — Southgate’s first games in charge since being appointed a permanent manager.

Southampton forward Nathan Redmond, meanwhile, was named as England under-21s’ Player of the Year for 2016.

Lallana voted England’s Player of the Year ahead of Vardy, Rooney was last modified: January 30th, 2017 by Arinze Ago